You mix your units between the title and the post but 6 hours.

What grade of fuel ? How much does a sample of it weigh per gallon ?

It doesn’t matter. It could be liquid or solid fuel of any quality. The question stated a given weight of fuel available, the weight consumed to produce a given horsepower (BSFC) and the horsepower produced. All the information needed is supplied except the time until fuel exhaustion which of course was the original question.

The question stated a given weight of fuel

In the title it says US gallons…

In the title it says US gallons…

Gallons were brought into it by someone else later. The title is therefore irrelevant to the question as posted.

The title is therefore irrelevant to the question as posted.

I agree, but that’s where the confusion is coming from. Maybe I should fix the title – done.

OK, so how would this reading problem be set up ? (to find the solution)

Kennebec is correct. Another way to look at it. 10,000 HP x .5 lb/HP-h is 5000 lb/h. You have 30,000 lbs, so 6 hours. The question should have stated that the consumption rate for the engine is constant and the engine is assumed to run at full load. In real life the specific consumption rate (per HP-h rate) changes based on engine load.

The title was edited, it previously stated gallons.

In the mean time we lost Patrick.

That’s never stopped us before.

This is off topic but y’all might find this interesting. This model is built off of a heat balance diagram for a steam ship. While thermal efficiency changes with throttle position fuel consumption remains roughly linear with power output.

In the mean time we lost Patrick.

Six hours, probably never made it.

Not to be pedantic, ok, yes, to be pedantic, but I beg to differ. Modern diesel engines are more efficient at higher load. They can be optimized for best efficiency, via turbocharging and the injection system, at 100% load, which is common for base loaded power generation engines which run at constant speed, or at another load range, such as ~70 - 85%, which is common for marine applications under the assumption that cruise speed is in the 70-85% range which leaves an additional 15-30% power available for maneuvering or storms, etc. which by nature would be used less often than cruise power. In the real world the difference in efficiency between 85 and 100% load is small.

Admittedly I’m not quite sure what RustB is referring to with “longer injection time”. 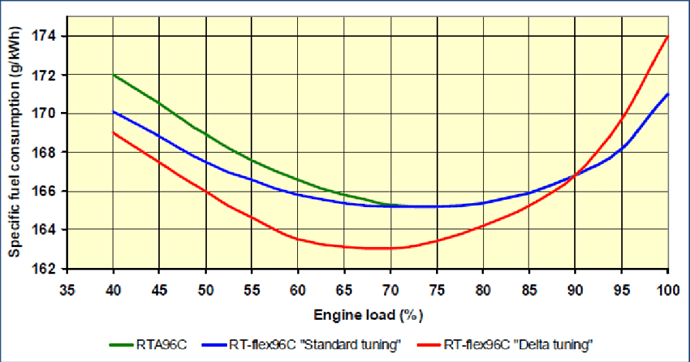 OK, so how would this reading problem be set up ? (to find the solution)