WOW! Finally some good news for the industry and a small view back into the window of the massive energy potential of the Alaskan arctic. All we need is for the price of crude to get back to $90+/bbl for the spending to put in the production and pipelines for this find and all the jobs it will bring.

The light-oil reserves were found in the company’s Smith Bay leases between Prudhoe Bay and Barrow along the Arctic shore, according to a statement from Caelus on Tuesday. As much as 40% of the find, or 2.4 billion barrels, is estimated as recoverable, the company said. That compares with the state’s proved reserves of 2.86 billion barrels in 2014, almost 8% of the U.S. total, Energy Department data show.

“It’s a really exciting discovery for us, and we think it’s really exciting for the state of Alaska,” Caelus Chief Executive Officer Jim Musselman said in a phone interview. “They need a shot in the arm now.”

Musselman, the man who engineered the $3.2 billion sale of Triton Energy Ltd. to Hess Corp. in 2001, founded Caelus in 2011 to explore and develop petroleum resources on the North Slope. In 2014, the company formed a partnership with affiliates of Apollo Global Management LLC to invest in oil and gas properties in Alaska.

The development will cost between $8 billion and $10 billion over the life of the project, which could be brought into operation by the fall of 2022, Musselman said. Located about 125 miles from any other facilities, the company will need to build pipelines and roads. An oil price of about $65 a barrel and greater certainty on state tax policy and incentives is needed to develop the field, he said.

“A lot of the investment decision is going to revolve around what happens within the state from a regulatory standpoint,” he said.

Caelus said its newly discovered field could produce as much as 200,000 barrels a day.

The discovery of light oil was made after seismic data was collected and two wells were drilled this year, the company said. Another well will be drilled in early 2018, Casey Sullivan, a company spokesman, said in a phone interview. The discovery would be the biggest in four decades, the company said. Prudhoe Bay, the state’s biggest field, was discovered in 1967.

The fall in oil prices to a 12-year low of $26 a barrel in February from almost $108 a barrel in 2014 prompted companies including Royal Dutch Shell Plc and ConocoPhillips to withdraw from expensive and risky Arctic operations. Shell ended a nearly $8 billion quest to drill for crude in the Chukchi Sea after disappointing test well results. ConocoPhillips formally relinquished its 61 Chukchi Sea leases in April.

The pre-tax cost to produce crude on the North Slope and transport it to market is about $40 a barrel on average, Sarah Erkmann, external affairs manager at the Alaska Oil and Gas Association, said in a phone interview. Oil futures closed at a three-month high of $49.83 a barrel on Wednesday in New York. They’re still at less then half their peak level in 2014.

Alaska North Slope oil production averaged about 475,000 barrels a day last month, down from roughly 494,000 a year earlier, according to Alaska Department of Revenue data.

seriously people! something this big is announced and all it gets is a great gaping yawn?

I guess the offshore really is dead!

Could it be “shell shock” from what has happened over the last two years.
Or after the debacle of what Shell did and Conocophillips pulling out of the area that most are waiting to see what comes of it.
Everyone was wanting to see Shell succeed last time, only to have the proverbial rug pulled out from under us. Also what will the administration do with this info. Obama is going on about the latest with the Paris Accord. So will someone be able to pull it off. I can hope but what hoops will they have to jump thru?

The article I saw said that plans were to drill from man-made islands.

even if was drilling on land, the remoteness of the Alaskan arctic means maritime transportation and support. In the 70’s the development of Prudoe Bay was a massive effort of maritime endeavor which created tens of thousands of jobs. My dad was on the sealift run by Crowley in 1976 (believe he was on the GLADIATOR…I know it was one of the INVADER boats).

I personally am very excited at this news and suddenly feel there is a chance there might be another big show up on the North Slope. All we need is for the price of crude to recover and there will be increased activity since there will be big money not being made letting that oil just sit there in the ground.

seriously people! something this big is announced and all it gets is a great gaping yawn? a couple of years ago everyone was just all agog about the arctic but today only crickets chirping… I guess the offshore really is dead!

I guess it’s basically people, esp. some believers and politicians, grasping at straws.

The location of this discovery is also not really comparable to the proper Arctic offshore locations, e.g. Burger prospect that Shell was heading for.

The location of this discovery is also not really comparable to the proper Arctic offshore locations, e.g. Burger prospect that Shell was heading for.[/QUOTE]

RIDICULOUS! this find is in a far, far better location to actually get production in place and it will still require massive maritime support to get up and going. Jobs and business opportunities for a person like me. 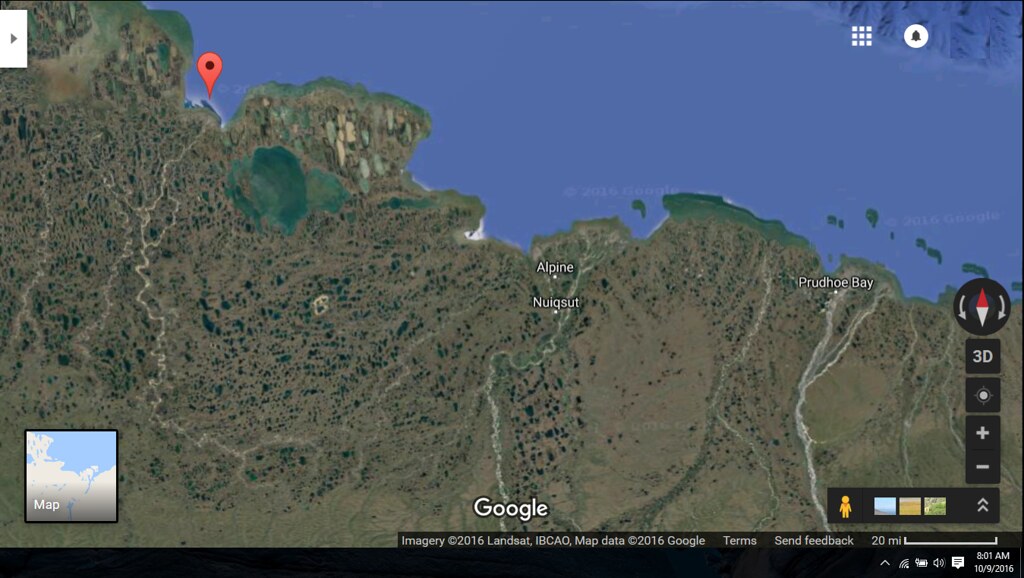 The nearest pipeline to connect to is at Nuiqsut so right at about 80miles but it is possible that the tundra between the two might not support an above ground pipeline or at least a large gravel pad is going to be needed to be laid first so just imagine the volume of rock alone that would have to be moved to the north even before a pipeline can even be started? then comes the production facilities near the wells and all the work that would require to put them in? there is an incredible amount of work to be done and all the jobs that will come once this find gets greenlighted to go forward but expect nothing to roll until we see crude back up to at least $80/bbl for at least three years before the spending spigots are opened

What’s this? So some corporation wants a State or the Feds to spend oodles of money to develop the infrastructure to bring its (and by ‘its’ I mean ‘We the People’s’) oil to market for their exclusive profit? Should we break out the checkbook and piss ourselves in excitement? All that’s needed is a little road, a terminal and some pipe?

If they were drilling in slightly deeper water, instead of artificial islands they could breath life to that concrete-strengthened two thirds of a supertanker that’s rotting off Herschel Island. There’s also some old caissons that could be repurposed into artificial drilling islands.