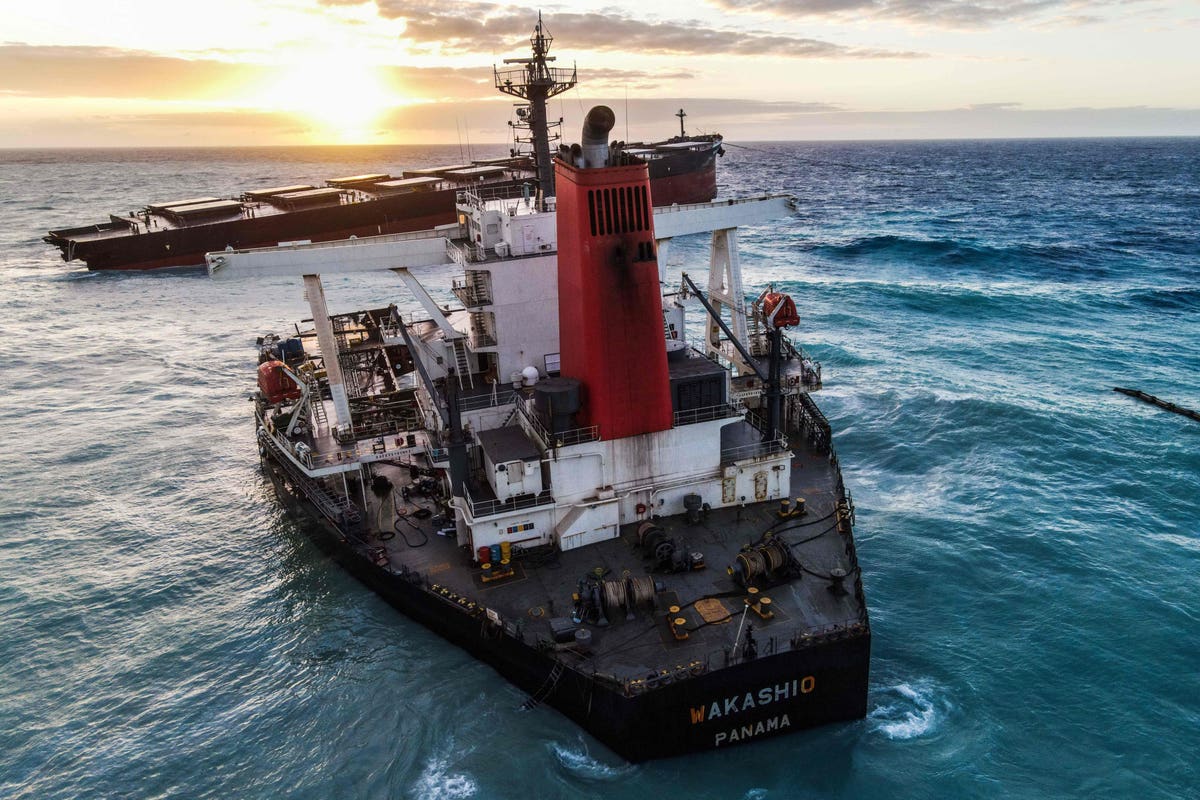 The role of Panama's international ship registry, as well as the role of the UN regulator of shipping (IMO) now called into question on what went wrong with the Wakashio causing biggest oil spill in the Indian Ocean in Mauritius' pristine coral reef...

Interesting article. Author is surprised to learn that ships registered in Panama may never call there.

He would be even more surprised to hear that there are ships flying the flag of land-locked countries like Ethiopia, Laos and Mongolia.

FOC has always been sketchy to say the least. Would’nt have mattered (As far as the casualty itself) if Wakashio was registered on Mars as far as the answer to “What happened?”. What does matter is every entity involved with that vessel are lining up their attorneys by the bucketloads. The shitshow has already started, and will continue regarding liability. Nothing new here.

You forgot Moldova and Bolivia.

more internet allowance for mariners!!! its a safety thing now, thats what i will be telling my company…

As of 2013, the Declaration has been ratified by over 50 states, and international law recognises the right of any state to sail ships on the sea under its own flag. Today, land-locked states which have merchant vessel fleets include Austria, Azerbaijan, Bolivia, Ethiopia, Hungary, Laos, Luxembourg, Mongolia, Moldova, Paraguay, Slovakia and Switzerland, though of these, only Ethiopia, Laos, and Mongolia have no river/sea port from which the high sea can be reached.

The Declaration recognising the Right to a Flag of States having no Sea-coast (French: Déclaration portant reconnaissance du droit au pavillon des Etats dépourvus de littoral) is a 1921 multilateral treaty which legally recognised that a land-locked state could be a maritime flag state; that is, that a land-locked state could register ships and sail them on the sea under its own flag. As of 2013, the Declaration has been ratified by over 50 states, and international law recognises the right of a...

The author is awfully negative and pretty inexperienced in the reach and range of IMO conventions and how shipping and these incidents work. An oil spill like this is covered by multiple agreements and it appears Mauritius signed on to the routine ones.

“ five days after the oil leak began, it was clear there was a complex and overlapping set of legal responsibilities that required a flurry of paperwork to be hastily signed regarding salvage operations, liabilities, shipowner responsibility, Government responsibility, Flag state responsibility.”

That’s right—and this is largely covered by the IMO
CLC 92 and the OPRC, and others which Mauritius signed on for voluntarily at IMO. These conventions are designed to speed up the process, build response coordination and of course, set liability limits and arrangements to make it all a known quantity for international shipping owners, and insurers. Some countries opt out, like the US—didn’t sign CLC. And some countries sign on, to ensure their ships get the required certs, (and maybe drag their feet on the other requirements).

“ While some authorities may claim that it is the responsibility of Mauritian authorities to be trained in ocean shipping laws, it is important to bear in mind that the entire oil spill and salvage response was mobilized for a vessel not designed to fit into any port within Mauritius and was not even scheduled to stop in Mauritius. It was a vessel for whom the global shipping industry had demanded ‘free right of passage’ through Mauritian waters, and close to well-known international biodiversity hotspots and whale nursing grounds.”

Yeah, how dare the authorities sign an agreement without knowing what the implications would be!

But as the author noted, the ship was bigger than any that could call at Mauritius! How could they ever conceive the possibility such a thing might hit their shores, that a large ship might in passing, uh, wait, hmm:

(Benita was smaller but the similarity points to known, recent risks of same happening in the future)

Of course even if the country couldn’t handle a ship of this size, the value of signing on to the complete set of IMO agreements (or the more commonly used ones) means Mauritius could register ships themselves for trade, or even as a business whether they ever visited Mauritius or not, just like Panama or Mongolia! But that would be very cynical if the sentiments detailed in the article are the true sentiments of the authorities there. Wait, I’m hearing some news from 2019:

Historically, Mauritius was known for being a well-utilised port of call for ships engaged in the trade of spices between Asia and Europe. A country successively occupied by the major naval nations of Holland, France and Britain, modern...

This doesn’t diminish the fact that something awful happened and the impacts are terrible, especially if there is a reliance on subsistence fishing in the affected area. There may have been gross negligence and this can lead to better payments for damages. Reflexively jailing the master is a concerning action, and too often used as leverage. I would wonder if this was such a sensitive area if Mauritius ever sought a ‘Area to be avoided’ particularly sensitive area designation with IMO like Unimak pass and other world sites. It’s a pretty unfair move to lambast the world governance from what is clearly a ‘first look’ by the author without similarly casting an eye into Mauritius’ own positions and if they took all the actions they could to protect their interests and what near misses and prior occurrences should have prepared them for.

. I would wonder if this was such a sensitive area if Mauritius ever sought a ‘Area to be avoided’ particularly sensitive area designation with IMO like Unimak pass and other world sites

Another question is how do sensitive areas get identified? I wonder how much of a factor local politics or expertise are?

It’s a matter of simple risk analyst, low probability high consequence event. Lots of shipping passes nearby. While it might be a puzzle as to why any one individual ship manages to hit an island it shouldn’t be a surprise when it happens.

Another legit question is with regards to an investigation. In this case with Panama it may not be an issue but in general it seems like some flag states are able to avoid real scrutiny of the results of an investigation.

It’s unfortunate that this article has such glaring errors, the author lists the fact that the Wakashio never called into Panama as the #1 controversy.

It gets recommended in accordance with the guidelines.

I may have misspoke on Unimak pass—it looks like it doesn’t hold such designation, though it did get an ‘area to be avoided’ designation, a lower level protective measure to be sure. The point is, to condemn the whole system of governance anecdotally is to invite a similar approach to whether the government of Mauritius exhausted the resources available to it by the governance. Fortunately (unfortunately), each new data point will enhance the ability of Mauritius to request, and be supported in obtaining some measure.

U.S. and international governments are giving attention to marine matters for conservation, safety and economic reasons. The United Nations International Maritime Organization approved on March 13 a series of five cargo transport buffer zones in the...

Though there was some historical pushing for PSSA designation, the current IMO page doesn’t list it so I guess that didn’t work, but the ATBA routing measure it did obtain is listed on the page:

Not just Unimak Pass, it’s the entire chain now. Ships are only allowed to use certain specific passes, no more Buldir Island for a waypoint.

The IMO Maritime Safety Committee per IMO SN.1/Circ.331 adopted five ‘Areas to Be Avoided’ (ATBA) in the region of the Aleutian Island Archipelago in order to reduce the risk of a marine casualty and resulting pollution and damage to the environment. These new ATBAs will come into effect on January 1, 2016.

The CG watches that area closely, AIS at least. We stopped south of Kodiak on that GC track for some unplanned engine work. CG emailed me almost as soon as we lost way.

I may have misspoke on Unimak pass—it looks like it doesn’t hold such designation, though it did get an ‘area to be avoided’ designation, a lower level protective measure to be sure.

I don’t know if there was any official designation but when we carried crude from Valdez to Japan and China we had to sail far south of the Aleutian chain. This put us in some of the worst weather on the planet in winter.

On box boats coming and going to Japan we sailed within view of Aleutian volcanoes.

Austria and Switzerland has ships registers but are not classified as FOCs.
Luxembourg MAY qualify as one, although most (if not ALL) of the ships under their flag belong to owners from BENELUX countries.

Austria has a river port on the Danube, you might expect land-locked countries with river ports to have vessels flagged in that country.

Luxembourg is NOT listed as a FOC by ITF.
Here is a list of the ships registers that are:

The following 35 countries have been declared FOCs by the ITF's Fair Practices Committee (a joint committee of ITF seafarers' and dockers' unions), which runs the ITF campaign against FOCs: Antigua and...

What is the lessons learnt from the Wakashio incident?:
https://lloydslist.maritimeintelligence.informa.com/LL1133622/Learn-the-lessons-before-the-next-Wakashio-comes

Another thing that shouldn’t need saying is that truth must be established before blame is apportioned. In that light, the arrest of Wakashio’s master and chief officer is worrying.

The criminalisation of seafarers — need we mention Prestige and Hebei Spirit ? — has been a scandal for decades. Without indulging in special pleading, we urge the Mauritian authorities to ensure these officers are not scapegoated for the actions of others.

we urge the Mauritian authorities to ensure these officers are not scapegoated for the actions of others.

What? was there some nefarious criminal mastermind on the beach with a giant magnet that pulled the ship onto the reef?

Yea, in this instance it is really hard to see how Mauritius shouldn’t hold the master and watch officer responsible, even if something else such as mechanical issues played a role. Even if something like spoofing was going on, there would have been enough clues and the master was warned.

Photos of the scuttling:

You see these people crying about the ‘criminalisation of seafarers’, do they think that all seafarers should be give legal immunity from being prosecuted for crimes they have committed or something.

They probably had to arrest the Captain and Chief Mate as a formality so that their version of events become legally binding, so that if they lie about what happened then they are officially perjuring themselves.