I was just told that on the Canadian shores of Lake Superior a fishing tug has sunk with 5 crew on board. Apparently they walked away from it on the ice. Any other information would be great if somebody knows more than me. they are fishing vessels however and not tugs

they are fishing vessels however and not tugs[/QUOTE]

yes. They call these fishing boats “tugs.” The vessel shown above is a gill netter.

Here’s some info on the fish tug Bessie E. that sank in the ice on Lake Superior.

And here’s some info on fish tugs:

Thank you for the link! We have fishing tugs leave here daily now that the ice is thinning up and some nights they dont come back. With the state of most of there equipment and lack of liferafts always makes for discussion as to where they are. I was under the impression that fish tug came from the fact that the builders used a tug based hull and added a fishing superstructure to the top. This is the same boat.

That is my “tug” as a fishing vessel then to give it perspective this is what it looks like as a “tug”. It has an ice-breaking bow with an angle to climb the ice and thicker steel.

And if the cabin was shorter it would look very much like a tug. It was built to look like a common tug of the early 1900s. She was built in 1934. Worked until the 80s then became this.

In reference to the fish tug “Bessie-E” capsizing on Feb 17th, 2016 at Mamainse Harbour-Lake Superior North shore (just north of Sault Ste. Marie), the attached link should provide further details on this near tragic event. The tug was part of a 13 vessel fleet belonging to Ferroclad Fisheries.
Thanks,
Chris M 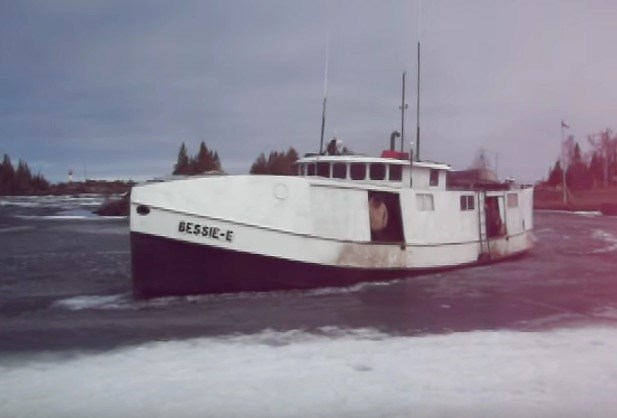 Thanks for posting this. I know it’s old but this is the first I’ve heard of it. It’s a rare occasion to leave a sinking on foot. Great Lakes Fish Tugs And Commercial Fishing