The 169-foot Pacific Producer grounded in 9-foot tides early Friday while traveling through Ouzinkie Narrows between Kodiak and Spruce islands. The vessel had just left the city of Kodiak two hours earlier when the mishap occurred in relatively calm seas, according to the Alaska Department of Environmental Conservation.
“It hit the beach fairly hard,” said Steve Russell, the DEC’s state on-scene coordinator.
Crew members likely won’t be able to refloat it until higher tides return next week, responders said Monday.
No one among the 16-member crew was injured and no fuel spilled when it grounded near the Spruce Island village of Ouzinkie, the Coast Guard said. A Good Samaritan fishing vessel transported 10 of the crew members to Kodiak while six others remained on board.
The vessel, home-ported in Seattle, sustained a 10-inch crack in the hull wall of a water tank, according to the DEC.
Crews are working to repair the hull, Russell said. The gash, however, would not prevent the refloating because the tank is designed to hold water, he said.
But tides up to two feet lower have hampered the crew’s attempt to move the Pacific Producer under its own power after lightering it.
The Coast Guard is investigating the cause of the grounding, Petty Officer Sara Francis said.
The Coast Guard also is monitoring the Pacific Producer and work was being planned to minimize any pollution threats, including the pending removal of diesel fuel on board the vessel.
On board are 10,000 gallons of diesel fuel, 6,000 pounds of anhydrous ammonia and an unknown amount of various lubes and oils, the DEC said. Also on board are 10,000 to 15,000 pounds of frozen bait being kept in operational freezers.
Ouzinkie Narrows is critical habitat for endangered Steller sea lions and the threatened southwest population of sea otters, according to the DEC.
Francis said the owner has a valid certificate of financial responsibility and is working with a salvage company to remove the vessel.
The vessel is owned by Chris Tsabouris and his Seattle business called East West Seafood. Tsabouris did not immediately return calls from The Associated Press seeking comment Monday.
Last week’s grounding adds to a string of problems involving the Pacific Producer in Kodiak.
In January, firefighters responded to reports of an ammonia leak on the vessel, which was docked at a busy commercial pier after crews walked off the job. Another ammonia leak was reported later after the Pacific Producer was moved to St. Herman Harbor.
Days after the first leak, an estimated 150 gallons of diesel fuel spilled into the water, according to the Coast Guard.
The Kodiak Daily Mirror said a former employee was accused of damaging the vessel’s engines with an ax in February.
Kodiak harbor master Marty Owen said the vessel has been in Kodiak since October and this was the first time it left to process fish. It sat idle for months while Tsabouris was outside the state trying to raise operating capital, according to Owen. He said Tsabouris still owes significant moorage fees to the city and is not likely to keep the vessel any longer, Owen said.
Owen described the Pacific Producer as part of an operation that appears to be underfunded. But he was puzzled by the grounding, saying he didn’t know how the vessel could have landed on the beach.
“So far, it’s not leaking so that’s good news,” he said.

How did they get 90 degrees off course in a narrow channel and do that?

oh dear, has to have been someone nodding off while driving. Very unfortunate for that old newprint carrier F.E. LOVEJOY built way back in the 1940’s I believe. That’s a very old hull to be sitting on a rocky beach like that. The good thing is that she was built heavy as they all were way back when.

Yup sounds like Iron Mike had the helm and someone nodded off.

Ouzinke Narrows is only half an hour from the dock. That does not seem like time enough for someone to get bored and nod off.

You would think the owner would have some sense to hire a great navigator with Alaskan experience, as we know there are plenty on this forum. But then again, seems this ship is another floating disaster waiting to happen. Ammonia leak and sizable diesel spill, followed up by running hard aground (no speculating on this one).

Where is all the outrage from the local community that was present when the Kulluk was on the beach? Can anyone help me to see the light?

There’s a little bit of difference in scale on this one. Also, we have higher expectations for a major oil company than we do for a fly by night small fish processor. Greenpeace will not be trying to shut down the Alaska fishing industry over this one, if it even makes their radar.

I wonder what the maritime equivalent to this classic cartoon is? 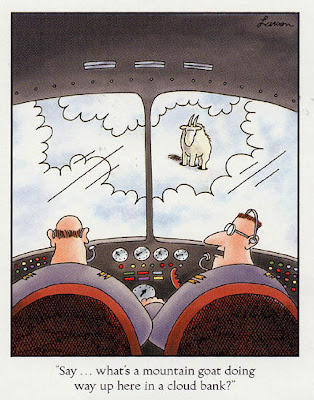 [QUOTE=The Commodore;103250]You would think the owner would have some sense to hire a great navigator with Alaskan experience, as we know there are plenty on this forum. But then again, seems this ship is another floating disaster waiting to happen. Ammonia leak and sizable diesel spill, followed up by running hard aground (no speculating on this one).

Where is all the outrage from the local community that was present when the Kulluk was on the beach? Can anyone help me to see the light?[/QUOTE]

who the FUCK are you SIR!

Been thru here, it is better to go around with anything over 80’.
Coast Pilot Books
Chart No. 1
Tide Tables
OTHER PRODUCTS
for MARINERS
16580
KODIAK ISLAND;SOUTHWEST ANCHORAGE, CHIRIKOF ISLAND

Maybe it was Sabotage.