This should not come as a surprise to anyone who has been through Budapest. The stretch of river in front of the parliament building is an unholy soup of day trippers making endless spirals around each other, bristling with selfie sticks and what have you. It’s the kind of place where you have all hands on lookout and your eyes on the radar at 0.125 NM. Those 135 x 11.40 meter cruise ships already have enough with threading their way through the spans, without having to deal with the small craft.

There’s a timelapse of the accident midway down this article:

It also conveys the traffic situation in the area. According to the article, the cruise whip captain was arrested.

EDIT:
I’m trying to make sense of how this happened, aside from the obvious. They’re both proceeding upstream through strong current (6 kts or thereabouts), so it should have been easy enough for all involved to slow the whole situation down. You see the Viking Sigyn squirming around as she approaches the span, ultimately entering the gap on a vector that will take her uncomfortably close to the left bank, so she must have been taking avoiding action for downstream traffic. The Hableany appears to alter to port just before impact, in effect cutting across her bows, although it’s difficult to tell from the timelapse.

Since the Hableany is 27 meters in lenght, she classifies as a “large craft” according to the CEVNI rules, affording her the same rights as the Sigyn. I wonder how this is worked out in practice in a place like Budapest, where the traffic density really is such that you can pretty much forget about making individual passing arrangements.

As for the captain getting himself arrested, I guess it’s either about maintaining unsafe speed, being drunk, or being a foreigner when a bunch of people got killed. We’lll see.

Also, better video of the moment of impact has surfaced:

It doesn’t add much, except to show that it happened under the bridge itself.

One Hungarian newspaper wrote: “As if a locomotive hit a Trabant”. It is indeed a large 1000 tonnes cruise ship with a length of 135 m, the Hableány was only 27 m. I sailed the oceans with a lube oil tanker that was 125 m long.

According to the recordings, it looks like that the Mermaid turned to the Viking Sigyn. We will have to wait for more information and the findings after the ship has been lifted.

The survivors were outside on deck and swept overboard, all passengers inside were probably drowned. With that kind of current, after the heavy rain falls. some of the victims could end up far away from the place of the accident. The Ukrainian captain was arrested after interrogation and was subjected to drug and alcohol testing, both of which came out negative.

The brand-new cruise ship Viking Sigyn had its documents handed over on March 19th in Rostock and sailed with state of the art electronics. The ship’s operation is recorded by a tachograph, and the recorders were seized by the police yesterday. Investigators are also investigating why the German ship’s personnel did not immediately report the accident to the authorities.

(CNN)After a river boat collision in Budapest killed at least seven people and left 21 missing, a boat captain has been detained.

Thirty-five people – including 33 South Koreans – were on board a touristic sightseeing boat when it collided with another vessel in the Hungarian capital Wednesday night, according to South Korean’s Ministry of Foreign Affairs (MOFA). The collision occurred in the city center.

The captain of the other boat has been detained and his arrest proposed, Budapest police said in a statement Thursday. The 64-year-old Ukrainian citizen, named only as Mr. Yuriy, was first questioned after police found evidence that warranted suspicion during their investigation into the accident’s cause. 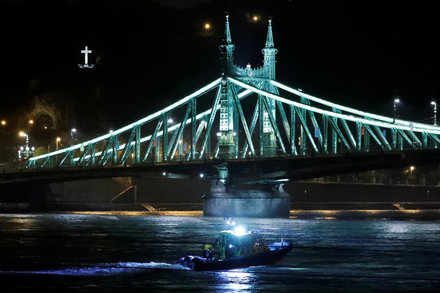 Boat Sinks in Danube, Killing at Least 7 on Tour of Budapest

Under heavy rain and winds, rescuers managed to bring 14 people to shore. 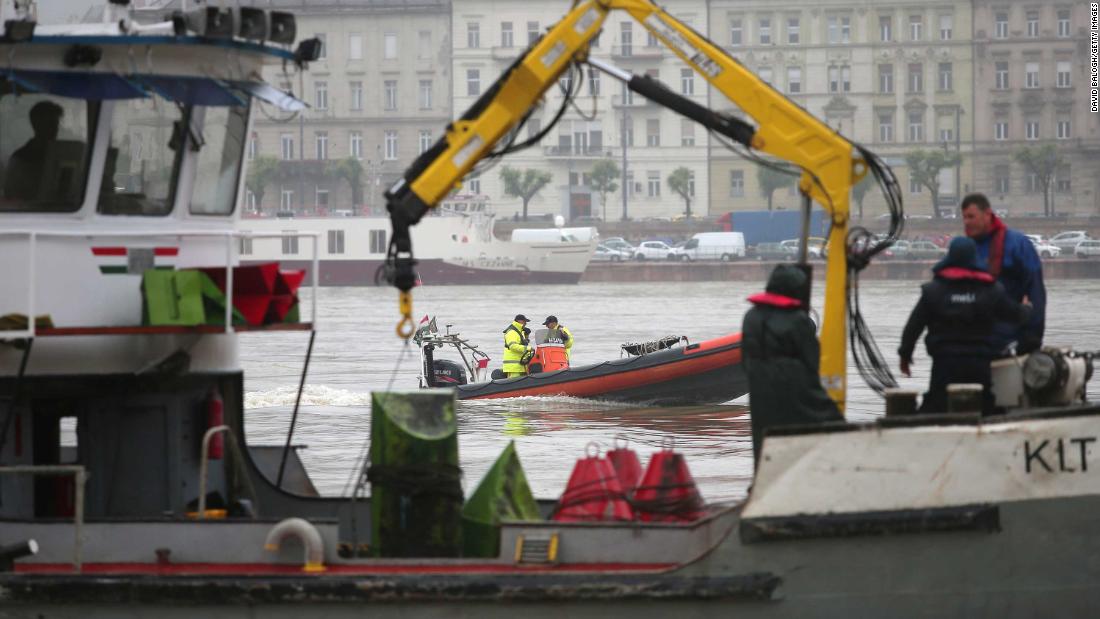 None of the seven South Korean tourists who died after a boat collision on the Danube River in Budapest on Wednesday night were wearing life jackets, authorities said.

The boat that sank was identified as the Hableany (Mermaid). Mihaly Toth, a spokesman for owners, the Panorama Deck boating company, said the vessel was on a “routine city sightseeing trip” when the accident happened.

Seven people are dead and 20 missing after a pleasure boat carrying South Koreans was struck by another vessel in the Hungarian capital.

Hableány ([ˈhɒblɛaːɲ], HOB-leh-augn; English: "Mermaid") was a river cruiser operated by Panorama Deck on the Danube river in Budapest, Hungary. It had two decks and a capacity of 45 people when operating as a sightseeing vessel. On the evening of 29 May 2019, the ship was traveling on the Danube in Budapest with 34 people on board when it collided with a much larger vessel, the 135-metre (443 ft) Viking Sygin, under the Margaret Bridge near the Parliament Building. All of the tourists onboard...

Look how low the freeboard is on Hableany. Maybe 3 feet? That has to be an aggravating factor.

Thanks, that clears up a few details. The more angles I see, the harder it gets to understand why they tried sneaking under the bow of the 135. Operating in that stretch of water on a daily basis must desensitize your sense of danger…

I hear the search for victims extends well into Serbia by now.

I hear the search for victims extends well into Serbia by now.

Serbia is at the southern border where the Danube leaves Hungary. Quite a distance from Budapest in the north of the country.

The water temperature was 13° C and the water depth 5.13 m. The Viking Sigyn sailed with a speed of 10-12 kilometers per hour and was unable to reduce its speed in time it was said.

‘Cut the front’ could indicate that as was mentioned in other reports the Mermaid at some moment steered towards the Viking Sigyn.

Is the traffic on that river so chaotic they don’t bother to make passing agreements? No whistles or radios?

Serbia is at the southern border, it is Slovakia I think. I hope they don’t end up as far as in Austria with that strong one way current.

In a news item I found the following:

The Water Traffic Code prohibits anyone from crossing the shipping route within 1000 meters, and the Mermaid has just done so.

Although I donot understand very well what is meant here, there is a Water Traffic Code in place. It could be that the Mermaid had illegally passed or crossed the shipping route.

The manual for the Danube navigation (218 pages) can be found here.

Don’t know, maybe the crew on the Viking Sigyn was focused getting through the bridge, wanted to be lined up with a ship that long.

Using the “Homunculus theory” there is no explanation.

Don’t know, maybe the crew on the Viking Sigyn was focused getting through the bridge, wanted to be lined up with a ship that long.

Could be, these rather low bow bridges are hard to navigate, not much room for a ship that long and with a large beam. The water level was also higher than normal due to the heavy rainfall leaving less overhead room to pass. This apart from the extra strong current in the river. Not the ideal circumstances for such a maneuver.

Interesting theory. The eye, or rather the interpretation of the pictures by the brain are notoriously unreliable Ask the police about eye witness reports…

Although I donot understand very well what is meant here, there is a Water Traffic Code in place.

Navigation on the Danube is regulated by the Cevni, which is sort of the European inland version of the colregs ++. On top of that, there are the various national rule books, which tend to be similar in length but far denser. I have only ever gotten into the Binnenwasserstrompolizeiverordnung, a daunting collection of bylaws for the German waterways, and the Hungarian version is no less impressive. There’ll be a part in those prohibiting all kinds of things in central Budapest, including a definition of the no passing zone signposted at 1639 (a ways down from the accident site).

As for the famed Manual on Danube Navigation, it is a mostly disappointing PR exercise, although it has some useful stuff like waterway profiles etc. There are numerous better books out there, aimed at different sorts of traffic, but I know of none that are free.

As for the famed Manual on Danube Navigation, it is a mostly disappointing PR exercise

I read it, or rather paged through it, after I had placed the link and came also to the same conclusion.

Thanks for the info. It seems to be well regulated by the Hungarian authorities and that is a good thing on that pretty dangerous river.

The salvaging of the Mermaid is delayed by the strong current, also divers cannot work either under these conditions, the very muddy water is an extra handicap.

Nighttime Chicken Game in strong current, between bridge pillars, proceeding too fast, too close and seemingly in the absence of traffic control. Interactions due to poor seamanship dictated as too often the conclusions …

When it became slightly apparent that vessels where under interactions effects, the only achievable manoeuvre to help avoiding the worst would’ve been for both to call «Full Astern». They would probably contact, but it would’ve been much less severe than to try, as a reflex, to steer away. The adage states that it is wiser to reduce early than to be force to reduce full in emergency!

Is the traffic on that river so chaotic they don’t bother to make passing agreements? No whistles or radios?

The Danube in general isn’t that bad. There is mandatory self announcement on Ch 10 for much of it, and traffic is pretty light when compared to other places. There is no reporting service in Budapest, no public harbor administration, and very little in the way of enforcement. The traffic conditions are beyond chaotic, as described above with lots of small (20-30m) craft that don’t appear to follow any set patterns. The big guys do pick each other up on AIS and discuss things before meeting, but I’ve never heard the day trippers and ferries join in, and doubt they understand much German anyway.

It seems to be well regulated by the Hungarian authorities

In theory, yes. In practice, you get away with pretty much anything

seemingly in the absence of traffic control.

You nailed it. It’s not so much the absence of clear rules, as it is a free-for all with numerous actors who need to bend them in order to keep operating. Scary place, especially at night.

EDIT: This seems to be where they’re at: An implementation study terminated in 2018 to bring things in line with the modern AIS driven RIS solution in use further upstream.

It seems to be well regulated by the Hungarian authorities

Yes, regulating is one thing and easy but enforcing it is another thing.