good for them to have eyes that can see! 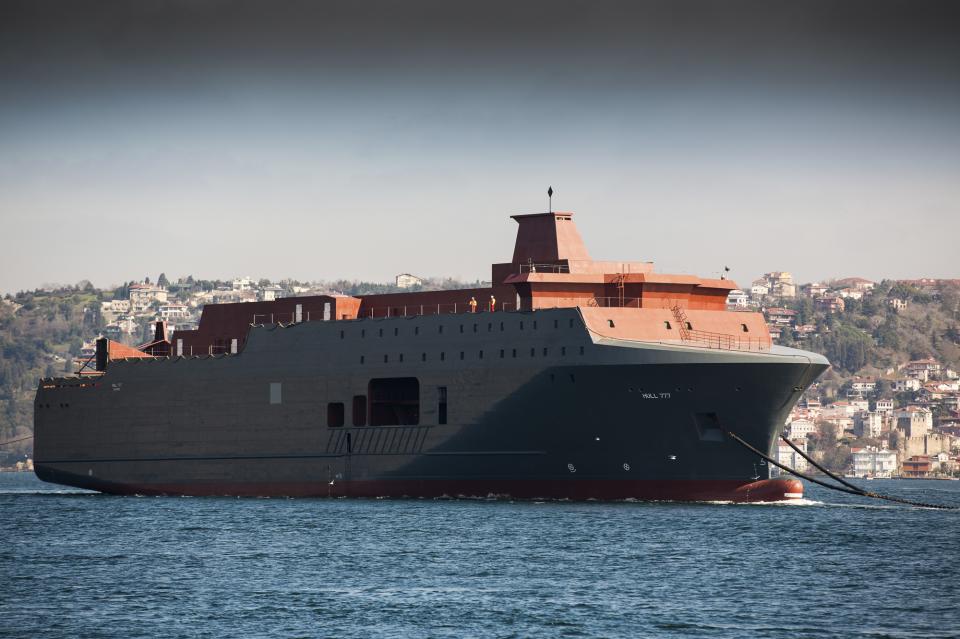 266f7b1bd249c316560f6a706700fe26.jpg959×639
This image made available by the Norwegian Military on Thursday, June 5, 2014 shows a Norwegian vessel passing through the Bosporus in Istanbul Turkey, on March 2, 2014. The mysterious ship the size of a large passenger ferry left a Romanian wharf, glided through the narrow Bosporus that separates Europe and Asia, and plotted a course toward Scandinavia. About a month later, at the fenced-in headquarters of Norway’s military intelligence service, the country’s spy chief disclosed its identity. It was a $250 million spy ship, tentatively named Marjata, that will be equipped with sensors and other technology to snoop on Russia’s activities in the Arctic beginning in 2016. (AP Photo/Norwegian Military)

OSLO, Norway (AP) — In early March, a mysterious ship the size of a large passenger ferry left a Romanian wharf, glided through the narrow Bosporus that separates Europe and Asia, and plotted a course toward Scandinavia.

About a month later, at the fenced-in headquarters of Norway’s military intelligence service, the country’s spy chief disclosed its identity. It was a $250 million spy ship, tentatively named Marjata, that will be equipped with sensors and other technology to snoop on Russia’s activities in the Arctic beginning in 2016.

“There is a demand from our political leadership to describe what is going on in this region,” Lt. Gen. Kjell Grandhagen said in an interview at the hilltop surveillance base outside Oslo. Of particular interest, he said, are Russia’s ambitions to develop oil and gas and shipping opportunities in the Arctic — and the “military aspects in terms of being able to defend that.”

As climate change eats away at the sea ice covering the North Pole, Arctic nations are fishing for secrets in East-West spy games echoing Cold War rivalries. The military dimension remains important, but this time there’s an economic aspect, too: getting a leg up in the competition for potential oil and gas resources, along with newly accessible shipping lanes and fishing waters.

Even before the Ukraine crisis put a chill on cooperation between Russia and the West in the Arctic— joint military exercises have been suspended and Canada skipped a meeting of an Arctic environmental task force in Moscow in April —Western nations in the region accused Russia and China of launching cyber-attacks and other espionage operations.

In Canada, a naval officer was sentenced a year ago to 20 years in prison for spying for Russia. And in December police arrested a Toronto-based employee of Lloyds Register accused of trying to supply China with sensitive information about Canada’s plans to build Arctic patrol ships. The Chinese government called the allegations groundless.

“Canada has been experiencing levels of espionage comparable to the height of the Cold War,” the Canadian Security and Intelligence Service’s oversight committee said in a report late last year. The intelligence service has been reorganized to put more focus on Canada’s northern perimeter.

The Arctic — surrounded by the U.S., Canada, the Nordic countries and Russia — was a fault line during the Cold War as NATO and Soviet submarines spied on each other beneath the ice cap. After a lull following the collapse of the Iron Curtain, the Arctic is regaining its strategic importance as warming makes it more accessible. Summer sea ice reached a record low in 2012 and scientific projections suggest it could disappear completely this century.

Shipping is already growing, albeit from low levels, in the Northern Sea Route north of Russia. The melt is also opening a new energy frontier — the Arctic is believed to hold an estimated 13 percent of the world’s undiscovered oil and 30 percent of its untapped gas.

The most accessible resources are within national boundaries and are undisputed. Security analysts say the risk of conflict lies further ahead, if and when the ice melts enough to uncover resources in areas where ownership is unclear. The U.S., Canada, Denmark, Norway and Russia are expected to have overlapping claims.

Critics say the U.S. is lagging behind in the race. A recent climate change report by a panel of retired generals found that despite a slew of planning documents, the U.S. has limited capabilities to operate in the Arctic. It said the Coast Guard has only one fully ready icebreaker and the U.S. Navy has few ice-hardened vessels that can operate in the Arctic, other than nuclear submarines.

“The geopolitical situation is ever more nuanced and complex. The risk of maritime events, or even unpredictable flashpoints, endemic to national security is growing,” retired Admiral Frank Bowman warned in the report.

In April, the first oil supplies were unloaded from an ice-resistant platform in Russia’s Pechora Sea, a development that President Vladimir Putin described as “our first step in developing the Arctic sea shelf.”

Even amid the current focus on Ukraine, Putin stressed at a national security meeting that Russia needs “to maintain Russia’s influence in the region and maybe, in some areas, to be ahead of our partners.”

In 2007 Russia resumed long-range strategic bomber flights over the Arctic and planted a Russian flag on the seabed beneath the North Pole. More recently, it asserted control over the Northern Sea Route with naval deployments and by reopening a military base on the New Siberian Islands.

Meanwhile, Russia has been accused of using clandestine means to glean secrets about the Arctic plans and activities of its Western “partners”:

—In Denmark, political science professor Timo Kivimaki two years ago lost his job at the University of Copenhagen and served 2½ months under house arrest for violating Danish espionage laws. The case is classified but in a rare interview, Kivimaki told The Associated Press he was arrested on his way to a meeting with a Russian diplomat, carrying a briefcase with public documents about Danish experts studying Arctic policy. Kivimaki said he wanted to foster peaceful relations between Arctic stakeholders and denied his activities had anything to do with espionage. Denmark’s domestic intelligence service, PET, declined to comment on the case.

Haugland said a foreign agent traveled to northern Norway a few years ago to map the landing point of an underwater communications link with Svalbard, a strategic archipelago halfway between mainland Norway and the North Pole. “If you sabotage this cable, people on Svalbard are quite blind. But also we (on the mainland) are quite blind about what’s going on in Svalbard,” Haugland said.

Documents leaked by former National Security Agency contractor Edward Snowden have prompted Norway to be more open about the fact that spying goes the other way, too.

An NSA document, dated April 17, 2013, and cited by Norwegian newspaper Dagbladet in December, said the Norwegian Intelligence Service had helped the NSA with access to “Russian targets in the Kola Peninsula” — home to Russia’s Northern Fleet — as well as reports on Russian energy policy.

The NSA wanted to deepen its intelligence exchange with its NATO ally “on Russian political, natural resources and energy issues,” Dagbladet quoted the document as saying.

Grandhagen, the Norwegian intelligence chief, declined to comment but said it’s no secret that Norway cooperates on intelligence matters with the U.S.

“You give something and you get something back in other areas. And we give information in areas where we have a good competence and good access,” Grandhagen said. Asked what that might be, he said: “I think our understanding of our neighborhood is an area where we are strong.”

Grandhagen said Russia also is modernizing its capabilities to collect intelligence, including in cyberspace. He declined to comment on Russian media reports that Moscow this year will reopen a Cold War-era military base in Alakurtti, near the land border with Finland, and staff it with surveillance experts to monitor NATO’s activities in the Arctic.

“What I can say is we’re aware that Russia has a significant intelligence apparatus including various means to monitor activity on our side,” Grandhagen said.

Now, where are the US vessels to protect our interests in the far North? Cease building stoopid useless LCS ships and build two big world class icebreaking patrol ships for the Arctic…NOW!

Considering that one of the missions of that ship is to spy Russian activities in the high Arctic, I would have expected them to go for at least a moderate icebreaker bow.

If the cable to Svalbard was severed, I wouldn’t be concerned about the locals losing their high speed Internet. However, there is a very large satellite tracking station in the other end of that cable…

[QUOTE=Tups;139113]Considering that one of the missions of that ship is to spy Russian activities in the high Arctic, I would have expected them to go for at least a moderate icebreaker bow.[/QUOTE]

surprised me as well…that vessel is only good for summer months in the high arctic or ice free winter waters but I trust the Norskes knew all that first. I respect them immensely for their knowledge and accomplishments.

also looks like it would be a kick ass 18 streamer seismic boat too!

I wonder if it’s less than 10k itc? If they class it an OS(py)V I’ll take it for a spin. Wonder what kind of hidden weaponry it will have?

Wonder what kind of hidden weaponry it will have?

hopefully lots of hidden weapons but why hide them? Knowing Norwegians, I guess they’d probably go for something a bit more modern, such as Bofors 57mm Mk3. However, it can just as well be unarmed (apart from small arms and maybe a few .50 cals).

edit: …or the 76 mm Otobreda Super Rapid that they seem to have on other naval vessels.

BTW, nowhere in the article it is claimed that the ship will be commissioned as a naval vessel for the Royal Norwegian Navy. It could as well become part of the Coast Guard. They already have a fancy patrol boat: I’d think that a seismic boat would be excellent cover for a spy ship. Dual purpose too.

The first shipment of Norwegian LNG is on it’s way to Asia via the Northern Sea Route: https://www.arcticnow.com/business/2017/08/01/russias-new-arctic-super-tanker-brings-norwegian-lng-to-asia/

That reminds me, the new Marjata spent some time in US waters already. I spied her tied up in a remote berth not far from my home in 2015. Very interesting vessel and I was certainly surprised to see her so close to home.

Russk gangsters are shipping Norge LNG by way of the Arctic. Dunno what to say other than congratulations??

And you could not post it in one of your billion other threads?

But! But! But! The Norweagons don’t want conflict. They just want peace, free love and to sell oil to pay for emission-free taxi cabs.

How much thrust is needed to power a taxi on love?

The first LNG cargo by the NSR is almost there: http://www.lngworldshipping.com/news/view,iceclass-lng-carrier-completes-northern-sea-route-transit_48708.htm

And there will not be any shortage of gas to carry in the future by the look of things: https://thebarentsobserver.com/en/industry-and-energy/2017/08/plenty-gas-gazproms-new-arctic-field-says-minister