Today I did a deep dive into deadship/flatship towing, and I am confused.

Both the Livingstone brothers in Tug Use Offshore in Bays and Rivers, and Mr. Slesinger in Ship Handling with Tugs, indicate that it may be beneficial to make up the tug on the end of the ship with more freeboard and leave the “heavy” end as the leading end of the tow. They both essentially say that there is better directional stability this way, but this is confusing to me, as when the ship is under it’s own power it usually steers just fine going forward.

Compounded in my brain with the fact that the pivot point is a function of the hull’s underwater resistance, which more or less should be the same in either direction (granted a little closer to the stern with sternway), and that directional stability worsens as block coefficient of increases (blocky stern vs pointy end) and also worsens as the vessel is down by the head (when going forward). How is it more directionally stable to go backwards when she’s trimmed by the stern.

Watching video of folks in Miami River deadship tow they seem to do fine in either direction, but I’m sure they understand the physics of the matter better than me.

Can you post a pic of the page in question so we can get a better idea of the full context of what the author is talking about?

~~
edit to add 20 minutes of a dude absolutely foaming at the mouth over deadship towing, showing stern first and bow first tows.

You have taken a deep dive. I think what they are trying to say is it takes less applied power to rotate a vessel from the lighter end. Controlling rotation when hipped up alongside can be difficult.

Perhaps just imagine you have a 2x4 on the floor and one end of it has a 50 pound weight on it . . . it is easier to rotate the whole from the lighter end. That is perhaps an oversimplification of what they are trying to communicate there.

Would the vessel as a whole be more directionally stable with the deep end forward, no it would not be above just a few knots of speed. But at stopped or very slow speeds it is easier to rotate or control the rotation of something from the lighter end of it.

Side note, I am guessing most of the Miami River work is done centerlead each end by yacht tugs, and not hipped up. I dont often see a yacht tug of the like commonly seen there work anything but centerlead.

Ha, I am sorry I had not watched the video. Those are not yacht tugs, just junk old tugs and junk old ships. None of it is hipped up alongside. In the books they are referring to towing while alongside like in the pictures of the Nautical Institute book and how to best control a dead ship with only one tug. Center lead each end like in the video is much easier.

Could be absolutely wrong on this, but my immediate thought is that the ship in the 3rd picture in the 3rd page looks like a rudder to some degree. By mimicking this tugs may be able to get better rotational control of the dead ship?

Also when towing on the hip like that it seems like there may be increased tension on the lines connecting the tug to the ship. Similar to a funnel. By having tug bow to ship stern it may push the water more rather than sheer it between the tug and ship.

Again my assumptions to could be totally wrong as I have no experience with this, but these were my first thoughts

I can’t comment on the theory but do have a good idea usual practices. This from working on deck large tugs, not operating as the docking pilot. Vessels in the video are moving up a narrow river no way to turn around. Ship may need starboard or port side to. Tow her up to suit docking. Tug on each end makes little difference which way she’s pointing.

My Coxswain experience, in charge of the vessel, was all Coast Guard when they did a lot of assistance towing. I always hooked up tows from the disabled vessels bow. Most times it’s the way to go. Some boats rather yaw than go straight. Sailboats with fin keel example. Boat on the stern could reduce yaw but we never had two boats available. I could have the disabled vessel drag a line off her stern. Short tow yaw not so bad don’t go the trouble explaining to the towed vessel . Does not take a lot to settle down, you can double the line off two cleats pulling a U shape for more control if needed.

Docking the casualty was another matter, we did a lot of docking. The offshore cutters and WPBs tow astern & turn over to Utility Boats to Dock. Big vessel we often used two boats One on the hip in charge, other same side on the bow taking ahead/astern orders from the stern UTB. Made up along side is essential most docking because you can back down, can’t do that towing astern. Boat on the hip aways has his rudder and propellor behind the disabled vessel far as possible. If so you have very good control. Make up further forward reduces steering ability a lot…

Like ships in the video we docked causality pushing bow or stern first as they required, made no difference to me.

I have never towed anything remotely as large as an entire ship, but I also never even though of towing anything backwards for any distance. On a small scale moving people or cargo AFT to get the stern down and bow up usually makes for a better tow.
I did a lot of towing work with a beat up old Hatteras as a young lad and when we had to pull some boat out in reverse it would usually shear all over the place if we kept going pulling her by the stern.

BTW - What are “yacht tugs”? I have seen plenty of yachts that more or less imitate a tug, but I have never seen one actually used to tow anything.

Fort Lauderdale, Miami and others South Florida very narrow waterways lots of large yachts. Several specialist towing companies towing and docking tight spots. Boat on each end they tow either way depending on were she needs to go. Tugs typically 30 feet or less purpose built on workboat hulls. Far as I know all yacht work never saw one tow a cargo vessel.

OK, that makes sense, tugs to tow yachts, not yachts used as tugs. The ones around here use twin outboards and have a cage to keep the skipper from getting whacked by errant tow lines. Towing an actual freighter with twin outboards would be a pretty slow and fuel consuming trip!

at slow speeds towing on the hip as illustrated may have some advantage especially at destination which may have the vessel along side the final destination with the bow aft. it is not unusual to see barges with skegs being maneuvered this way. pretty much up to the master and or pilot what he prefers. the criterion being that the prop shafts or shafts are locked, and the rudder is blocked secure amidships. on some naval vessels with twin rudders there may be a cant due to dead rise. some experienced captains may request an offset of several degrees in the rudder angle to compensate, which gives more direction and control of the vessel underway

Practice brings understanding - - - try it several ways - - - been there, done that

Back in the 70’s the US Navy would use two “mike boats” [some type of landing craft] to dead-ship the destroyers a 3500tn vessel. Place both boats on the same side, one at each end of the ship, and with the bow’s of the boats facing each other. Rigged that way, they could move the ship side-ways, or fore/aft. 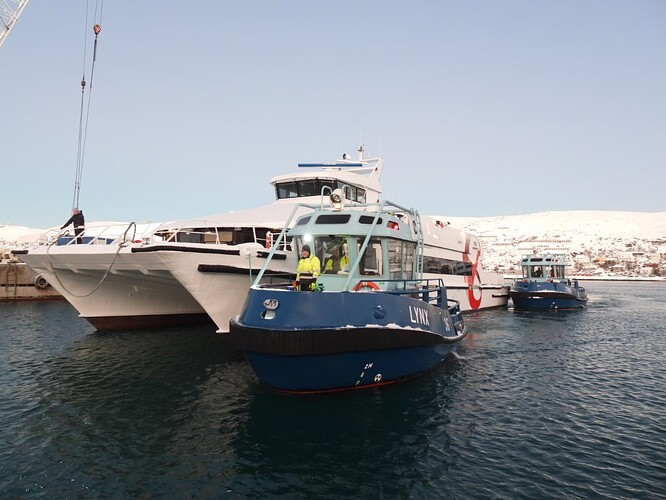 Back to the textbook theory. Some towing repeats same type vessel same location. Most I have been on arrive and look, how am I going to handle this? Current, wind, how the tow is built, her crew capabilities and more. Your own boat configured one way or another. Based on observation and experience commit to the tow, theory has little to do with it.

Yeah. The M-boats were twin screw & twin rudder. Nothing fancy.

Used to see the LCM,s assist LSD’s & LST’s at Little Creek, LSD pretty big ship with lots of windage. LCM seemed to have plenty of power big fenders & flat forward, good pushers. Few CG boats set up to push always on a tow line or made up alongside.

Based on observation and experience commit to the tow, theory has little to do with it.

This lines up with what I’ve observed in comparing books about tugs vs. books about ship handling. While all the books I’ve read are culminations of the author’s experience, the ship handling books are much more abstract, vectors, math and physics in scenarios the author has been in, while the tug books are all “this is how I did it, and this is how folks in different pars of the world did it, and here’s a chapter dedicated to describing every bar crossing on the Pacific coast of the US.”

Overall this has been an excellent exercise and I feel better off for it.