A major incident lost behind the NOBLE DISCOVERER grounding 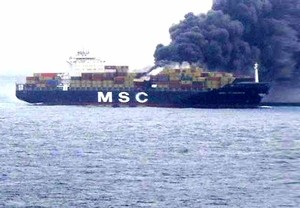 The MSC Flaminia ablaze in the mid-Atlantic. Image via Tradewinds

The operator of MSC Flaminia, NSB Niederelbe of Germany, said that the vessel suffered an explosion as crews were battling a fire that broke out in the vessel’s number 4 cargo hatch. The ship was transiting the north Atlantic Ocean on its way from the Charleston to Antwerp with 2,876 containers.

As gCaptain had reported earlier, the explosion forced all crew to abandon ship and prompted the Falmouth Coastguard to broadcast an alert to all vessels in the area asking for assistance. The very large crude carrier, DS Crown, was first on the scene and was able to recover 24 crew from a liferaft.

On Monday, the three injured crewmembers were transfered to the MSC Stella and later taken by helicopter to a hospital in Azores. In a statement, NSB Niederelbe says that two of the men are in stable condition and one has been transferred to Portugal to receive care.

The remaining 18 crew members, together with two passengers, remain onboard the DS Crown which is expected to arrive at the UK port of Falmouth on Wednesday evening.

NSB Niederelbe has also revealed that it has contracted SMIT Salvage of Rotterdam to lead salvage operations. SMIT has already dispatched two large firefighting tugs to the Flaminia. The first, Fairmount Expedition, is expected to arrive in the area on Tuesday evening while the second tug, Anglian Sovereign, equipped with additional firefighting equipment, will leave Inverness, Scotland, on Monday and is expected to arrive on scene either late Thursday or early Friday.

NSB Niederelbe also says that an additional vessel in their fleet has been re-routed to help support the salvage operations.

No word yet on what may have caused the fire and explosion or the extent of the damage to the vessel. NSB Niederelbe says, adding that we will have to await salvage crews to arrive on scene to make those determinations.

There but for the Grace of God go we…