What in the name of the Holy Father is going on here!

now it is Diamond Offshore swimming back into the newbuild ordering shark feeding frenzy!

Diamond Offshore Drilling, Inc. said Thursday that it has entered into a turnkey contract with Hyundai Heavy Industries Co., Ltd. for construction of a new ultra-deepwater drillship with delivery scheduled in the fourth quarter of 2014. Total cost of the project, including commissioning, spares and project management is expected to be approximately $655 million.

The new drillship, to be named Ocean BlackLion, will be of the same design as Diamond Offshore’s three units currently on order with Hyundai. The design will include dynamic-positioning, dual activity capability, a maximum hook-load capacity of 1,250 tons, and operating capability at water depths up to 12,000 feet, though initially outfitted for operation at 10,000 feet. The unit will also feature two seven-ram blowout preventer stacks, with the second available for use as a spare.

In addition to the drillships, Diamond Offshore says that it has completed the sale of four jack-up drilling rigs in two separate transactions. The Ocean Heritage was sold for $45 million in cash, and the cold stacked mat-supported rigs Ocean Champion, Ocean Crusader, and Ocean Drake were together sold for $10 million in cash.

“We are principally a floater company, and during 2012 we have sold five jack-up rigs for a total of $95 million, which is being reinvested in our fleet,” said Larry Dickerson, President and Chief Executive Officer of Diamond Offshore. “We believe this new drillship along with our four additional units under construction—the Ocean BlackHawk, Ocean BlackHornet, Ocean BlackRhino and Ocean Onyx—will be profitably employed in the deep and ultra-deepwater markets.”

Diamond Offshore’s fleet of offshore drilling rigs now consists of 32 semisubmersibles, 8 jack-ups, and one drillship, in addition to the four ultra-deepwater drillships currently under construction.

When will this ever stop? Can it go on forever and ever? How can it and why? What is going on here!

Anyway, very soon I am going to update my list of drillships on order throughout the world by which I mean throughout Korea…

Well, it isn’t like the maritime industry has ever gone on a building spree only to overload the market. Maybe some of the same going on now, but in the drilling industry. Time will tell.

[QUOTE=cmakin;69433]Well, it isn’t like the maritime industry has ever gone on a building spree only to overload the market. Maybe some of the same going on now, but in the drilling industry. Time will tell.[/QUOTE]
After the crazy building program and subsequent crash of the early '80s, a friend of mine owns a small boat company that survived. I remember a plaque on the wall of his office that read, “Lord please give us one more boom…I promise to save some money this time!”

I remember a plaque on the wall of his office that read, “Lord please give us one more boom…I promise to save some money this time!”

Lets just all sit back and enjoy the ride. 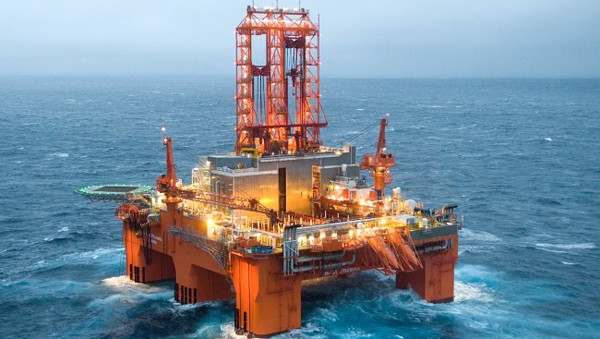 Fred Olsen Energy ASA announced today that one of their wholly owned subsidiaries has entered into a turnkey, $700 million contract with Hyundai Heavy Industries Co., Ltd. for the building of a harsh environment ultra deepwater semi submersible drilling rig.

Once built, this rig will measure 123 m in length and 96 m in width and be the largest semi-submersible drilling rig in the world.

Another subsidiary for Fred. Olsen Energy ASA has been granted an option from Hyundai for the purchase of a similar second drilling rig exercisable within October 2012.

Delivery is scheduled for March 2015.

this time is is a semi with the pricetag of a drillship…and with an option for a second one!

what on earth is happening?