unless the tanker just hit the rear end of the dredge?

unless the tanker just hit the rear end of the dredge?

BARELY three weeks after the warship USS John S McCain collided with the oil tanker Alnic MC on August 21, the waters around Singapore witnessed another fatal collision early on Wednesday.

The latest accident — involving the tanker Kartika Segara and the dredger JBB De Rong — brings the number of collisions so far this year to seven.

This equates to an average of 8.1 collisions per year over the period, or a minimum average of one accident at least every two months.

As in a busy highway where car crashes are sometimes expected, Singapore sits in the middle of shipping routes connecting east and west.

The Singapore Strait is one of the world’s busiest sea lanes where vessels are separated by less than a nautical mile, or about 1.8 km, and daily vessel movements total more than 1,000.

So, are the waters around Singapore just too congested for ships to avoid colliding with each other?

The answer is actually a “no”, as both of the recent collisions could have been avoided.

As for the Kartika Segara and JBB De Rong collision, both vessels had not heeded warnings from the port’s vessel traffic control to avoid the collision, and in the case of the USS John S McCain and the Alnic MC, the warship was not detected, possibly due to not switching on the automatic identification system, and there was also steering gear failure.

The port also uses a traffic separation scheme to reduce collisions. The scheme involves neatly co-ordinating ships sailing through a busy strait by moving them into distinct lanes heading in the same direction.

An ex-naval officer with extensive experience said that 8-10 collisions a year is not much different from other very busy harbours in busy straits and narrow channels, while emphasising that more should be done to avoid fatal accidents.

More often than not, such accidents are due to human error or mechanical error.

Ship collisions have a greater probability of occurring at night when the crew may be tired and visibility is poor. The Kartika Segara and JBB De Rong collision was slightly after midnight while the John S McCain and Alnic MC collision occurred in the pre-dawn hours.

To further remind shipping crews, who sometimes pay with their lives in such collisions, the ex-naval officer suggested having a standby radar switched on during the night or when it is raining, and having an extra person on watch during the night, ideally someone senior.

And as the maritime sector embraces digitalisation, an over-reliance on technology can also be responsible for collisions. Actually seeing vessels from the deck is much better at avoiding collisions than just relying on the radar, which may not pick up small boats or where a miscalculation might suggest an approaching vessel being further way than it actually is.

There has been an increasing focus on safety at sea, highlighting issues such as mental health of seafarers, but perhaps more can also be done in terms of training and motivation of crews to keep them safe from collisions.

I sail/power around Singapore and cross both lanes to go to Indonesia all the time, I dont see its too congested at all.

Look at the all the last plane crashes around the world, self inflicted crashes of perfectly airworthy aircraft, they pilots have far less skill today than years ago same in ships except they crash into each other rather than the ground

Did you follow the track of the tanker after it ran into the dredge, it looks like it was going to do a runner

From Straits Times today: http://www.straitstimes.com/singapore/two-fatal-collisions-in-a-month-raise-maritime-safety-concerns
Can more be done to improve safety in Singapore waters and Singapore Strait??

In my early Naval career I was an Officer of the Watch in antisubmarine exercises when it was common to over ride the commands order from the CIC to conduct a manoeuvre as we were the safety officer. The orders were always given as come left or come right which we then passed to the wheelhouse as Port 10 or Starboard 10. The amount of rudder used being varied as if the order was say to come hard right. We typically had 2 years bridge experience in a junior capacity before obtaining a Bridge Watch keeping Certificate and another couple of years under our belt before we kept a watch as safety officer… We were also assisted by 3 lookouts, Port Starboard and Astern who were rotated hourly. When meeting a US warship in US waters I have been ordered to manoeuvre to pass 2 miles off regardless of what the warship is doing. In common with many masters I have noticed junior officers are losing the appreciation of what the visual picture outside the bridge windows can tell them. Modern electronics and radar displays are an incredible improvement over the plotting sheet but seamanship and safe bridge watching are still vital.

Seems the McCain was detected even if by a Singapore patrol vessel.

Other sources suggest the McC showed on the VTS but only as a blip - bearing in mind it is a world class VTS monitoring thousands of vessels it may have been seen as clutter.

Findings on USS John S. McCain collision will be made public when ready - in...

SINGAPORE - The full findings of Singapore's investigations into the Aug 21 collision of an oil tanker and a United States warship will be made public once it is ready - a process that typically takes up to 12 months.. Read more at straitstimes.com.

The JSM has left Changi Naval Base. She will be transported dry to Yokosuka, Japan for final repairs according to CNA today:

SINGAPORE: The USS John S McCain (DDG 56) departed Changi Naval Base on Thursday (Oct 5), six weeks after its collision with an oil tanker off the ...

She will be loaded onto Dockwise’ Treasure at ATTV2 off Tuas, on the West side of Singapore:
Here is Treasure on a previous voyage,carrying two rig:

This story link just turned up in RN chat-room :-

How high-tech Navy went off course on basic seamanship skills

“How in the world could a billion-dollar destroyer not know that there’s a freighter closing in on it?” Sen. Angus King asked during a Senate committee hearing on Sept. 19. “This is just unacceptable from just a modern seamanship point of view, it...

Another less likely but possible factor could be a tendency for a warship’s air search radar to cause random and usually temporary failure of a nearby ship’s electronics. Any MSC watchstander can attest to improperly secured air search radars causing everything from GPS failures to fire sprinkler activation to ignition of flares inside life raft canisters, destruction of smart watches and so forth.

If a ship were to get close to a warship during a transit of a crowded area (two cables or less) which seems to be possible in the approaches to the Singapore Strait then it’s easily imaginable that there would be failures of electronics including that involved in auto-navigation and steering.

All is not well in Yokosuka… 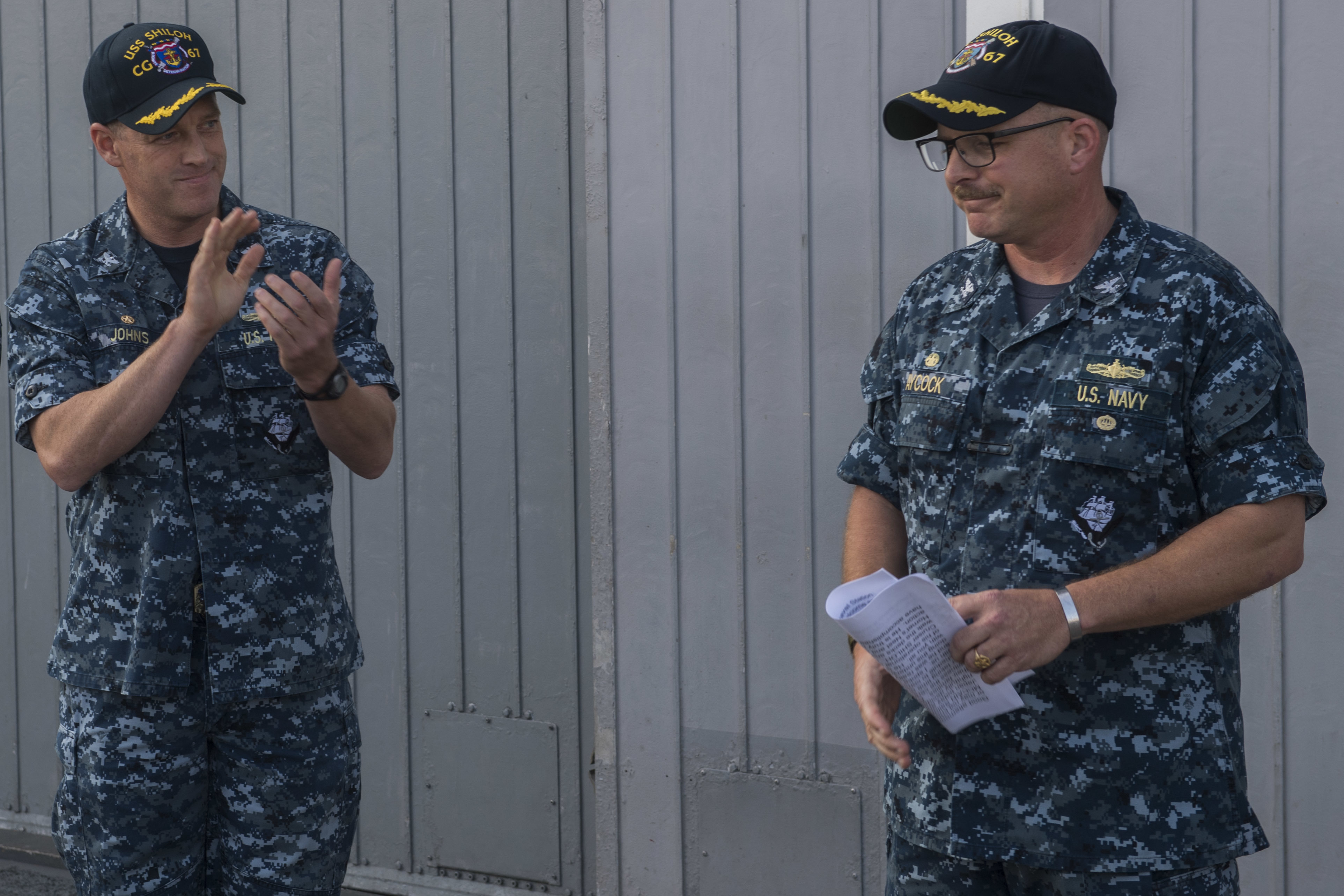 Morale aboard the cruiser Shiloh plummeted during the command of Navy Capt. Adam Aycock, making the ship the butt of jokes on the waterfront in Yokosuka, Japan.

Geezus it’s a wonder this CO wasn’t shanked in a passageway or tossed down some stairs during foul wx. 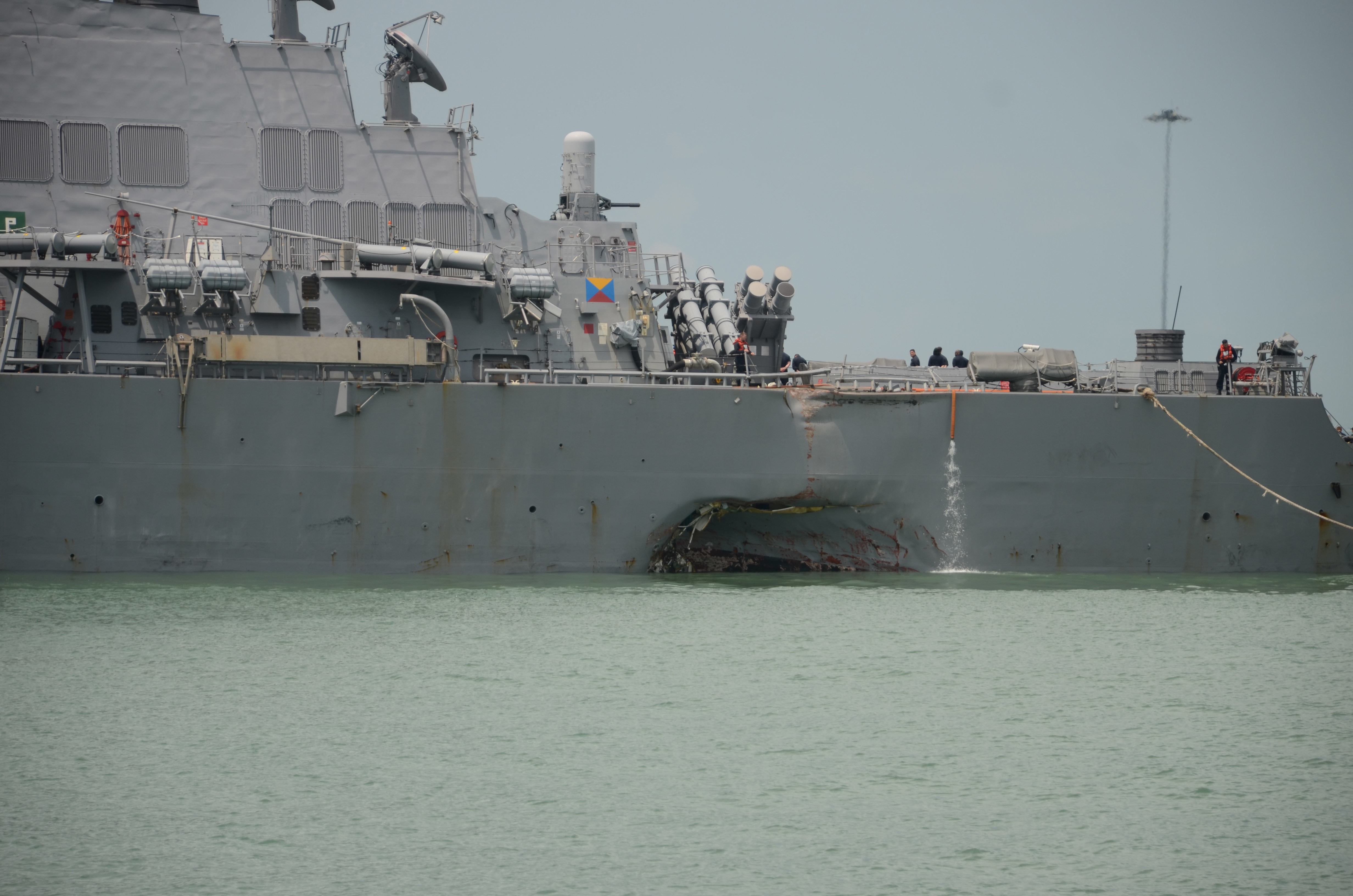 The Navy's 7th Fleet announced the commanding officer, Cmdr. Alfredo J. Sanchez, and the executive officer, Cmdr. Jessie L. Sanchez, were relieved due to loss of confidence. Ten sailors drowned after the McCain collided with a merchant vessel in...

Key word: ‘Preventable’ That about says it all folks.

‘Preventable’ when used with the CO means it’s something the CO had control over. As the CO can’t control the System (operation tempo, deployment schedule, budget, OPSEC and so on) the System can’t be at fault.

And as the System isn’t at fault then there’s no reason to fire anymore admirals. Blame assigned, problem solved, everyone is happy.

Same old story as Deepwater Horizon and others. Crews play a hand they were dealt by others. It is convenient for those in power to obsess on how the crew played their hand in order to divert public attention away from what kind of hand they were dealt.

SUN, 22 OCT 2017
London. Oct 22 – A press report, dated Oct 21, states: The collision-damaged destroyer John S. McCain, en route from Singapore to Japan aboard Treasure has been diverted to the Philippines because of new structural issues and a typhoon. The destroyer developed a 4-inch-long crack along its starboard side while transiting to the Yokosuka Naval Base. Weather conditions associated with Typhoon ?Lan? had already slowed the journey to Japan, and the crack?s discovery led to the diversion to Subic Bay, Philippines. Once pier side, experts will inspect the crack and determine if any additional repairs are needed before continuing to Yokosuka. The cause of the crack and the extent of the structural issues were actually still unknown. The majority of the crew has already returned to Yokosuka, with only about 10 sailors remaining aboard the ship.

The 53,818-dwt Treasure (built 1990) was heading for Yokosuka, but has run into Typhoon Lan forcing it to change destination.

It has also emerged that the John S McCain has also developed a 4-inch crack in its hull, reports military publication US Naval Institute (USNI).

As a result of the heavy weather and the new damage to the US naval vessel, the Tresure is said to be diverting to the Philippines.

Dockwise to move John S McCain to Japan
Read more  .
It is unclear if the new damage to the John S McCain was caused during the voyage. The crack is about four inches long on the starboard side, amidships, a US Navy official told USNI.

“Once pier side, experts will inspect the crack and determine if any additional repairs are needed before continuing to Yokosuka.

“The Treasure had already slowed because of the storm, and pulling in allows inspection of the small crack while the weather improves,” the spokesman added.

The John S. McCain was involved in a collision with Stealth Maritime’s 50,800-dwt tanker Alnic MC (built 2008) while underway east of the Straits of Malacca and Singapore on 21 August.

Ten US Navy sailors were killed, while the ship suffered significant damage to her port side aft resulting in flooding to nearby compartments.

Earlier this month the US Navy said the collision had been “preventable” and replaced the ship’s two senior officers as a result.

The HLV Treasure is still in Subic Bay:
https://www.marinetraffic.com/en/ais/home/shipid:367856/zoom:12
Presumably with the JSM still on deck?

Anybody know why so long??

Maybe waiting for the navy to figure out how to stop the cargo from breaking in half.

The Treasure is still in Subic Bay:


Anybody know WTF is going on??
← previous page next page →