The prestigious King Neptun Award for 2022 has been awarded to Doug Dixon: 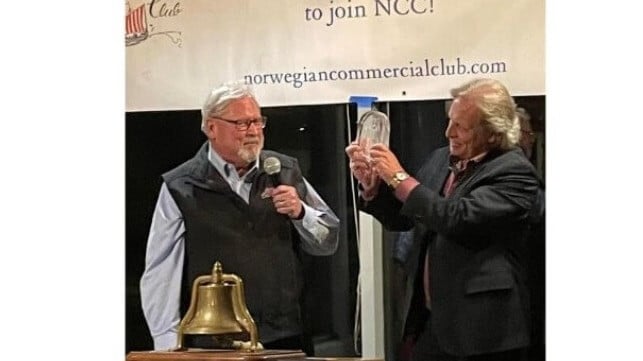 To recognize his life-long contribution to the North Pacific Fishing Industry and his countless hours of community service, the Norwegian Commercial C...

Several of the earlier recipients are mentioned in this article about the history of Norwegian involvement in developing US fisheries in Bering Sea by introducing modern Factory Trawlers:

Erik Breivik ran factory trawling here at home with “Atlantic” and John Sjong with partners, Konrad Uri and John Boggs, were invited to Norway and joined Erik on a trip to familiarize himself with trawl fishing. The idea was that “Atlantic” could possibly be sold to the USA and operated there by a cooperative shipping company.

This did not work. In the USA, a vessel that engages in fishing or transporting goods between ports in the USA must be built in the USA. This is legislated in the so-called “Jones Act”. It had to be a US-registered vessel, that is to say that the hull had been built in the US to be able to operate fisheries there. Lars Aage found a large US-built trawler, 311 feet, which was lying in Norfolk and which could be modernized and used. Erik Breivik and Jon Sjong, together with Konrad Uri and John Boggs, bought this old trawler called “Seefreeze Atlantic”. Our Seattle office designed the remodeling and modernization.

The trawler was named “Arctic Trawler” and thus became the first large factory trawler in Alaska, and a new fishery was under way. Erik Breivik became fishing skipper on the boat and several of his former key crew here in Norway, including chief engineer Kjell Gjerde, trawler bass Kjell Inge Røkke and others. joined as crew on “Arctic Trawler”.