Survival At Sea - All You Need Is A Cooler 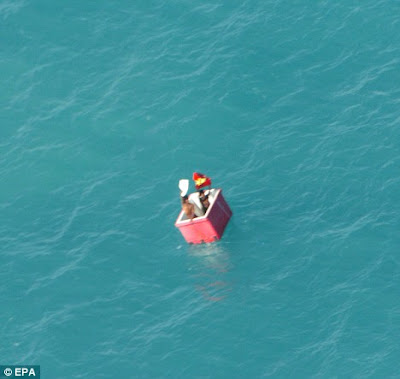 Two men who drifted helplessly for 25 days in a large icebox through shark-infested waters have been rescued after a chance sighting by an aircraft crew.

The men were found desperately waving their shirts as an Australian Coastwatch plane flew across the Torres Strait, between Australia and Indonesia. The plane’s crew called for a rescue helicopter.

After being winched up into the helicopter, the men identifying themselves as Burmese, told their terrifying story of how their fishing boat with 18 others aboard broke up in rough waters and everyone was thrown into the sea.

The pair are believed to be the only survivors.

Amazing that they were able to survive that long. Talk about lucky!