If it saves money, no damage, and no one gets hurt then it was a great decision by the master!

I don’t agree with this. For one tropical cyclone (TC) avoidance is a matter of risk and probabilities, there’s going to be errors in position as well as intensity and track errors in the forecast so it’s possible to just get lucky.

Also I don’t agree with the characterization of the process of avoidance as “a decision”.

Bowditch is a good source to start, also this: Mariner’s Guide For Hurricane Awareness In The North Atlantic Basin

I shouldve used my sarcasm font

It’s a Goldilocks problem. Don’t want to be too hot (too risky) or too cold (too high a cost to schedule etc).

But in actual practice if a captain takes too high of a risk but arrives without incident or damage most likely nobody will complain. In fact they might be admired for their high level of seamanship.

On the other hand if avoidance turns out, in hindsight, to be too costly, that captain might find themselves under more pressure in the future.

This problem some consider may have been a factor with captain Davidson, possibly that criticism of his diversion for Erika was too conservative.

So avoidance isn’t just a technical problem. It is useful to have an agreed upon benchmark such as the 34 kt wind field rule.

I do agree that if the crew calls while near the eye of a hurricane convincing the DPA there’s an issue should be relatively easy.

It’s a good bet that the crew understands that there’s a problem.

What did I miss?

The responsibility:authority ratio can make DPA a truly miserable job. People really need to go back and reread the Code.

Moved from this thread:

What is the latest with the Sunshine State?

News on the Sunshine State?

Apparently they tried to pull an El Faro and sailed right through the middle of the eye of Hurricane Ian.

They sailed into the eye, did a bunch of damage, didn’t take storm ballast, didn’t fill after peak, crew practically mutineed at the next port, Captain relieved. Career over? Lifeboat smashed One guy on board had a brother on El Faro Green water up to manifold on a light tanker It was really really bad, I heard.

Question is; why didn’t a crewmember call the DPA? Or if someone did call the DPA why did the vessel sail through the eye?

Yes, The 34 knot wind radius is a good guide. I would add to that the average position errors for TC given here https://www.nhc.noaa.gov/verification/pdfs/Verification_2021.pdf 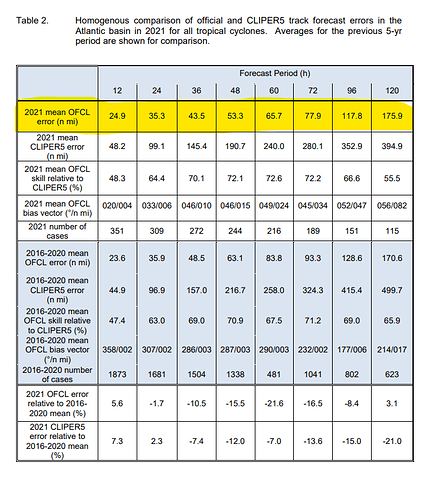 Hurricane avoidance: the “What, When, Where, Why, and How.”

Simplest first, what is meant by hurricane avoidance? The 34 kt rule by itself is simple. The when and where is going to get a lot more complicated.

It’s not only the mates that could call the DPA, for example the C/E also could. Is the plan to keep the ship outside the 34 kt wind field is a good first question. If the captain starts blowing smoke at that question it might be time to consider making a call.

Anybody know what the Sunshine States plan is for Nicole? Maybe they can have another crack at hurricane avoidance.

The notion that the Captain is always right went out the door when two 747’s collided on a Tenerife runway in 1977 killing 583 innocent people. That was a watershed for us all.

Silly Auzzie, you are talking about airplanes. You know, thousands of airplanes take off and land every day through all kinds of weather and storms and issues, but very few crash. Why? Because smart people took the lead back in the 70’s and came up with procedures, training, and recurrent simulator training requirements. (note: sarcasm. I agree with your point 100%, but unlike the aviation world that acted upon that accident and began massive changes to include continuous improvement, the USA maritime industry just likes to talk about it for ~15 minutes and then go back to figuring out how to cut costs).

And you mention the maritime world in the same post? HAHA! There would be an airliner crash every single day if the airlines operated with the disjointed BS USCG merchant marine system. Hell, a captain can become an unlimited master and never even have to prove he can pilot a ship (no practical test ever required during the licensing process).

Maritime office monkeys love to talk about Bridge/Engine resource management and SMS and all that jazz, but the systems are all a joke and never will amount to anything.

To mention our industry and airliner safety/procedure in the same thread is hilarious. It’s amazing there are not MORE incidents each week.

The Tenerife incident led to the introduction of CRM into the airline industry which crossed over into the Maritime field being referred to as BRM.

CRM supports two highly trained individuals with type approved hours on that particular aircraft presented with exactly the same layout and electronics. Additionally they are supported by a comprehensive set of operating procedures plus direct back to base technical support. They are also bound by airport constraints regarding crosswinds etc etc.

Attempting to apply this doctrine to the Maritime field was always bound for failure. We all know that. In the Pilotage profession we are confronted with anything from a 30m pleasure craft to a 400m VLCS all with non standardised equipment as opposed to the airline industry. I have Piloted a vessel with seven different nationalities aboard.

There were some advantages to BRM. We started to share information and develop some sort of plan. There was a degree of improvement in equipment monitoring plus a reduction in power distance between the crew and Master.

I well remember an incident in 1978 as a young third mate employed by Bank Line. We had two appalling radars and a radio direction finder……that was it. One of the radars failed early in the voyage and we implored the Scottish Master to get it repaired at the next port. He stonewalled. Transiting the English Channel in a hellish storm and the one remaining radar failed in the middle of the night. We were blind. The Master lost the plot and elected to pick up the VHF berating all adjacent vessels for their lack of assistance. A passenger ship turned around passed around our stern and led us clear of the surrounding shoal patches. All light vessels had been blown off station. The recorded VHF transmissions were passed onto the local Bank Line Superintendent and the Master was relieved at the next port. He was never appointed as Master again and was demoted to a shore based Cargo Super. We came very close to losing that ship.

Have we moved on from this? Apparently not. In 2022, forty four years later, ONE MAN can direct a 200m tanker into the teeth of a hurricane unchallenged.

I even kept the barogram from that incident. 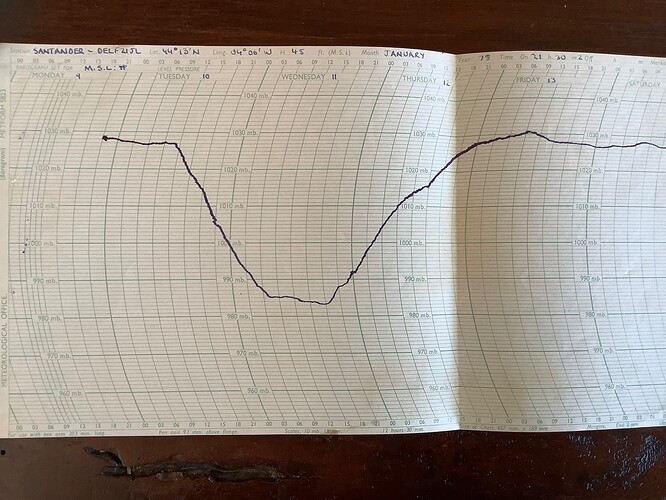 Do you see my point?

In my experience if the crew has an unusual and unfamiliar tie-up it’s helpful to draw them a quick sketch of how the lines will be run beforehand.

This is true regardless of what it says in the SMS or whatever office personnel think or have to say about it.

Likewise in my experience it’s a valuable practice to plot TC information in the wheelhouse on paper when the NHC update arrives on the SAT-C.

This is true independent of whatever is being taught or what it says in the SMS. It’s just good seamanship.

I think the better DPAs actually sailed, in a senior role, and make sure they are available to the crews if they ever do call or email

The question is will anyone call in the first place? It’s not that uncommon for the unlicensed crew to call and complain about the bos’n or the C/M but what are the chances one of the licensed crew calls and reports the captains planned route is unsafe?

A captain is susceptible to motivated reasoning same as any human. However a crew member that believes that the captain is in error is up against a very strong tendency among mariners to assume the captain knows what he is doing and the third mate, for example, does not.

Yes and no.
Part 121 aircraft at least have the pilots dealing with weather and the dispatchers as well. If a ship was like a 747, heading for a hurricane would have the dispatcher on the radio saying WTF are you doing!
Modern cheap sat-comms and trackers have made it for even a small sailboat to be able to have a shoreside weather routing service send out routing advice if desired. That doesn’t mean you have to listen to it, but at least the warnings were sent.

Very mixed feelings about that. In the “Perfect Storm”, the crew of the Satori were inexperienced and terrified. They called in a Mayday against the captain’s wishes, a VERY dangerous rescue ensued, and then the skipper had to go find the boat after the storm. The boat was fine.
OTOH CRM/BRM is supposed to be all about the underlings being able to speak up and be taken seriously.

I thought it was the same storm that I remembered from 1978 but I was thinking of December, the same year when the Muchen went down.

This was the one.

https://www.researchgate.net/profile/Tim-Bayliss-Smith/publication/275862999_The_Storm_Surge_of_11_January_1978_on_the_East_Coast_of_England/links/5b084541a6fdcc8c252fd355/The-Storm-Surge-of-11-January-1978-on-the-East-Coast-of-England.pdf?origin=publication_detail
I remember this hellish night very well. We were down to the marks with fertiliser from Santander. I heard, anecdotally, that three vessels were lost that night. 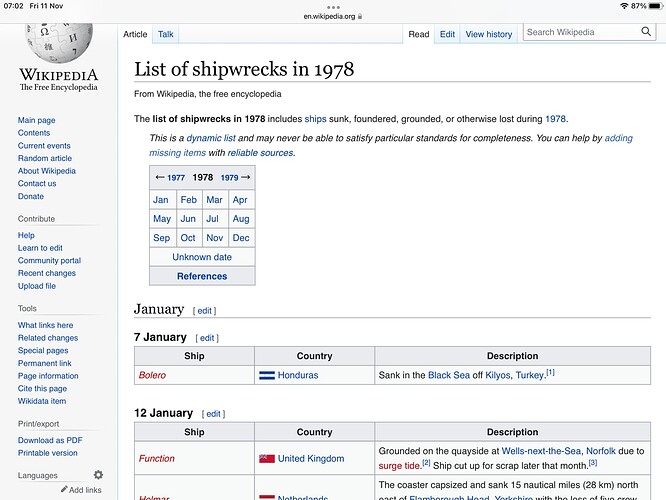 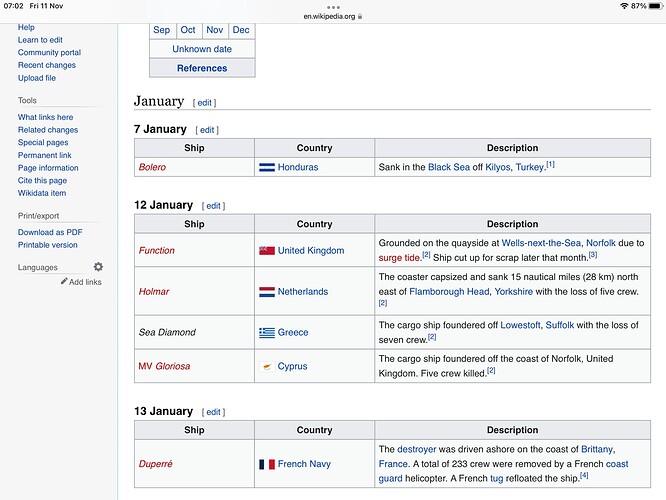 I was master of an AHTS working with a jack up 2 miles from an airport. In certain weather conditions the airport closed down. They didn’t care whether you were Chuck Yeager all flights were canceled.
Working the rig remained my decision, there were no parameters laid down.
The maritime industry differs from the airline industry in that those in charge of a vessel are free to use their judgement whether they are truly capable or not.

I was second mate of a Resolution Bay class container ship built in the same yard as the Muchen. She was 150 miles from where the Muchen went down.
An apprenticeship and time as a junior officer with Bank Line gave one an excellent grounding in a nautical education given the various cargo’s carried.
I remember in about 1971 a couple of Bank Line cadets came onboard the Texaco Tanker in Durban where I was Second Mate with our cadets for breakfast. They made a clean sweep of the menu.