They follow a track much more closely than a man with continuous instant set and drift adjustments.

One of the first things that you learned behind the steering wheel in heavy weather was to let the ship ‘ride’, don’t fight the ship too much, take it easy on the wheel. Except when the ship was thrown off course by a gigantic wave.

The rudder force generated for specific angles is not measured or displayed by any of the ship’s navigation systems. In order to optimise manoeuvrability when steering manually or automatically the rudder forces have to be calculated by measuring the bending of the rudder stock.

One system that can do this is the Barke Optimised Steering System (BOSS) of Damen’s subsidiary ‘van de Velden Marine Systems’.

Over steering is a phase that many flying students go through and needs to be corrected early. Same on a ship. We had an AB on a T-AGS who was unable to track a survey line. We coached him but the harder he tried, the more frustrated he got. The recording techs were constantly calling the bridge to complain. After several of his watches s-turning all over the place, the captain finally gave in and reassigned him to maintenance.

A bit OT here but I once taught an AB(?) that couldn’t catch on how to steer by using the analogy of driving a car with an automatic. The tricky part of the analogy is the car’s speed is analogous to the ship’s rate of turn. Rudder in the direction of the turn is the throttle and counter-rudder is a tap on the brakes.

Took him less than 5 minutes once he figured out what I was trying to explain.

My father was an AB on the Peter Kerr of the Luckenbach Lines in the 1920s, on the intercoastal run. He was the best helm on the ship (it’s written by the Captain on his AB papers) and was always given the helm when they went through the Panama Canal.

When he became skipper of our Sea Scout ship he taught me how to steer a compass course. The sweetest part for me was doing a perfect course change, coming up bang on the new course without having to correct. 50 years later I was offered the helm of a sailboat under power and just for kicks tried it again. Settled right in. Like riding a bicycle, it seems some combined eye/brain/motor skills you learn in youth you never forget.

Also, our Sea Scout “ship” was a 42 foot WWII-era spoonbill bow Higgins boat. The descriptions of steering in heavy weather brought back many memories of fighting our way home to Berkeley through the Carquinez Strait in heavy weather.

Enough. Back to work.

Then of course, when the heavy weather is coming at you from astern a different approach is needed!

using the analogy of driving a car with an automatic.

Every time I drive my low-powered Vanagon with auto trans I’m reminded how much it feels like a boat where you set the throttle and the vessel catches up to it – you’re working with forces rather than translations.

load cells/accelerometers in the ship, data back to the office which has the tank testing and NA data so machine learning/AI computer will suggest a better heading for the human to just click and say ok after checking the traffic.
Its a simple problem to solve remotely and the office now knows how hard the ship is begin pushed.

Does a fighter pilot move the control surfaces, no he moves the stick and a computer decides what will happen

Does the bridge OOW move the control surfaces, no he moves the stick and a computer decides what will happen.

Is this an idea you have or something that exists?
Anyway, your fighter plane analogy is not really valid nor fly by wire in general. Some modern fighter aircraft are inherently unstable and cannot be controlled directly by humans. No commercial aircraft are made this way. The ship equivalent would be loading a ship to the point she would roll over in flat water sitting still and counting on the stabilizers to keep her from capsizing.
The “envelope protection” you might be thinking of that some fly by wire aircraft have is not really something that translates to the sea.
ME: Hard Port!!!
HAL: I don’t think I want to do that. That will put undue stress on the cargo lashings and strain the rudder. I suggest 5 degrees rudder angle.
ME: But there is a huge wave coming!
HAL: I do not agree.
ME: There is a guy in a Sunfish right ahead of me.
HAL: My calculations do not agree.
Ahhhhhhhhhh

The days of manual control over modern systems are all but gone anyhow. Think of the engine room. It’s all computer controlled and oftentimes unmanned. Someone on the bridge pushes the EOT and the screws turn. But beyond that it’s all automation - fly by wire.

There is only the illusion of control nowadays.

You are close to surf riding or a broach if the helmsman can feel that the ship is hard to control. Sometimes it can be necessary to use 25 degrees of rudder to maintain course. This indicates a marginal level of control and hence the vessel is likely to be close to surf riding and broaching. In such a situation the ship’s speed should be reduced immediately.

Apart from this it can get worse if an uncontrollable yaw angular velocity, together with the resultant sway velocity, results in large roll angles and in worst cases in complete capsize.

Yes and no. At the most basic, all “fly by wire” stuff is using a different type of cable from A to B. My car has “throttle by wire” and it can independently control the throttle if the stability control kicks in. I can turn that off and then the throttle just does what I want it to.
Are there really any boats or ships anyplace that decide for you what to do, various DP schemes excepted. Can I hop on some ship, turn the wheel hard port, and have the ship decide that is really not a good idea and have it turn gradually to port, go straight, or maybe go starboard instead?

Not sure how this would scale, but the small boat method of fixing this involves a long line, some chain, and one or more old tires. The chain sinks the tires and the drag slows the boat down and helps with the steering. If you leave off the chain the tires can pop up and skip, suddenly removing drag to bad effect.

This ‘tire’ method is a variant of the good old sea anchor but I think it could be a problem storing these tires on board a small ship when not in use. For large ships this method is impractical and probably will not work, insufficient drag.

I can’t imagine carrying tires on board for that purpose. Repurposing these in an emergency maybe: 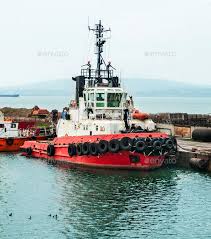 I think this was in another thread, but I’ll give my two cents, with plenty of caveats:

A sea anchor holds the boat from the bow and is like a big parachute. The tire is the cheap way to make a drogue, which is tied on at the stern and is not designed to stop the boat. The idea is the extra drag keeps the boat from going too fast and tends to make steering a lot easier.
Probably none of this scales up to a ship, but it works on smaller boats.