Not an image we like to see. Alas, in recent years, the story seems to be repeated every winter on the St. Lawrence. However, winter navigation on the St. Lawrence to Montreal was established permanently in 1964!
The Canadian Coast Guard (CCG), which is responsible for keeping the channel open with its icebreakers, is regularly singled out for this deplorable situation, a major irritant for the economy. Losses for the marine industry and foreign trading partners have already been estimated at more than 100,000 per vessel for every 24 hours late. Yet, following the long-running cost recovery debate of the Mulroney era (1988-93), under the Oceans Act, "All domestic and foreign flag vessels transiting through an ice zone are subject to the same rate of 3100 per transit ".

To better understand why we are not able to provide a service properly that is billed to shipowners, one must refer to the cuts in CCG’s ship acquisition budgets over the last twenty years, but even worse, if we look at the National Shipbuilding Strategy developed by the Harper Government in 2010, we see absolutely nothing about average icebreakers that are sorely lacking on the St. Lawrence and will be shortly in the Canadian arctic. On the other hand, we find a polar icebreaker whose need is in no way demonstrated and which will surely swallow some billions of dollars. And then, the Seaspan yard in Vancouver, chosen for this contract and many others, would have to be able to build it. Their roadmap is not very eloquent to date. The first of three ocean sciences offshore vessels that they have been mandated to build since 2017 has been launched, but is not delivered because the hull welds are deficient. As for the two joint support ships also ordered in 2017 at the same yard, their construction is postponed from year to year because the yard is not able to build them. Meanwhile, Davie Shipbuilding, which had been deemed unfit to build these boats by the National Shipbuilding Strategy Office, had time to make an unsolicited proposal to the Canadian government resulting in a very timely containership transformation into a Joint Support Ship, at a very competitive price. The ship, the Asterix, has just completed its first year of operation. See link here.

This brief glimpse into the chaotic state of shipbuilding in Canada doesn’t delve into irregularities at Irving Shipbuilding, the other Canadian shipyard chosen to execute most of Canada’s shipbuilding strategy. Suffice it to say that the first of six Arctic and Offshore Patrol Ships ordered at the Halifax Shipyard failed the Transport Canada inspection.
The most difficult thing to understand about the Trudeau government’s inaction on this alarming situation is that all the ingredients are in place to implement a solution. There is a budget for the construction of icebreakers (in addition to the mega-project of a polar icebreaker, which some sources close to the issue have reported it is dying), and there is a building site available as we speak that has proven itself in the construction of icebreakers in the past and has already made interesting proposals to the government to act quickly and at very competitive prices.
In the hope that good will and pragmatism will prevail and that next year at this date we will not have to submit a report as distressing as this: to the best of our knowledge:

What about Tor Viking and Balder Viking? Aren’t they being made ready at Davie? What about Molly Kool (ex. Vidar Viking)? Seems like something should have been done sooner to keep the seaway navigable, but now that something is being done… what should be done now that isn’t being done allready?

The average age of Canadian medium and heavy icebreakers was almost 40 years prior to the acquisition of nearly 20-year-old second-hand icebreakers from Europe. Now it’s 36 years following the commissioning of CCGS Captain Molly Kool and will drop to about 32 years once the two remaining interim icebreakers enter service. And then it’ll start going up again…

However, I can’t help but admire how Viking Supply Ships managed to get rid of ships that were constantly making loss (the charter with the Swedish Maritime Administration had not been renewed, Shell had withdrawn from Alaska, and there wasn’t any business available in the Russian Arctic due to sanctions) for a price that was higher than the cost of building nearly identical icebreaking offshore ships at the same Norwegian shipyard where these ships came from (about US$90 million).

On a related note…

According to a 2015 McLean article, the RCN is now a Rank 5 navy, only capable of “offshore territorial defense.” Other navies that share this capacity include Bangladesh and Indonesia. Both are developing nations, poor enough to be long-term recipients of Canadian aid.

Our rusting fleet sits out of sight of most Canadians, over the horizon, but not too far from shore; the sailors aboard struggling to keep the aging ships afloat. 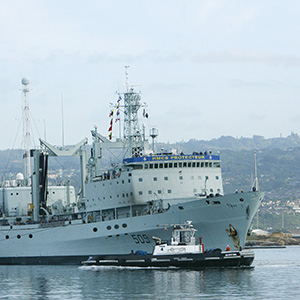 The sinking of the Canadian Navy - Macleans.ca

A maritime nation has let its naval fleet go to seed. Here's how the once-proud Royal Canadian Navy fell into such an embarrassing state of disrepair

I thought the Canoodians had been giving some serious thought to acquiring the AIVIQ. I guess ol Massa Gary refuses to come down on a price or is insisting that ECO operate the vessel on a longterm charter (even though he has already been made whole by Shell and to sell at a single $1 would be a profit)

Interestingly, if CCG actually purchased it to replace CCGS Terry Fox, they’d be replacing a 1983-built, 1991-commissioned interim icebreaker with a 2012-built interim icebreaker. Shouldn’t there be a limit for how many interim solutions you can do in a row? On the other hand, if and when the CCG would finally get their hands on a brand new, tailor-made Coast Guard Icebreaker, we could call it the c-c-c-combo breaker…

if and when the CCG would finally get their hands on a brand new, tailor-made Coast Guard Icebreaker, we could call it the c-c-c-combo breaker…

but how she can avoid being called the Diefenbreaker is beyond me.

common. she’s not even been put in the water yet, cut them some slack.

I refuse to call it anything else but that…

As for being defective, on a conceptual level her icebreaking hull form is among the best in the world. The only thing defective in that project is the Canadian shipbuilding industry that pushes the delivery of the vessel by two years every year…

I very serious;y doubt that with the 3 Tor vessels they purchased. I hold that the reason the CCG is passing on the AIVIQ is that even though he has been paid by Shell for the ship Gary Chouest is wanting too much for them to pay or worse is demanding that the CCG not actually buy it, but lease it with ECO providing the operation of it. Chouest sells very few vessels outright and in many cases even if they sell a ship demand they have the contract to operate it. Just look at the WHEELER! Sold but ECO is still collecting money every single day in the deal. GREEDY FUCKING BASTARD!