Of course we all knew this...it was the Navee's fault...TWICE!

That report is crap. It’s like a stupid child’s book report written the morning it’s due.

Admitting an accident is avoidable is like saying water is wet. What were the CAUSES? Talking point tech-babble like ‘failed to follow the international rules of the nautical road’ will sound great to maritime naives but are self evident to us.

Facts without much critical thinking. I guess no one can get in trouble this way - except for the dead sailors but they’re dead already so no harm.

“Human error is a symptom, not a cause.” – Prof. Nancy Leveson.

Her insight has been around long enough that it makes any incident report whose analysis ends with “somebody made a mistake” automatically suspect, IMHO.

Yes it is about making the standard nautical/ naval language into the egalitarian politically Marxist correct-speak. Actualizing, putting into practice by default the recently but reluctantly trashed de-gendering destruction of naval rating titles appears to be slipped into the USN regardless of push-back"

If they’re not deliberate concessions to the public then I think I’ll just go shoot myself. I have to admit the red lighting one has me rattled.

It looks like the US Navy live in their own little world.

If you read (and especially if you read between the lines) the CNO’s preamble to the overall report, where he mentions something about “retaining privilege” in protection of the “legal interests of the United States,” I THINK you can translate that language into something like this: “On the advice of my attorneys, we are not going to reveal the details of our negligence in order to try to mitigate the results of getting our butts sued.”

The US Naval Institute’s reporter, Sam LeGrone, has an article posted this am, along with the CNO’s report quoted above. It is partly background, partly analysis and partly reporting “reactions”, as the press likes to call them. One of the most interesting reaction comments, from a Navy SWO who served a lengthy tour with the Royal Navy, including watch standing on a RN Frigate, pretty much sums up one of the main “short answers”, for those who like short answers:

"“People squeak through the system. They may be great officers and they may great engineers, but they might not have had a lot of time handling ships in busy waterways,” McGuffie told USNI News in an interview.
“We have guys that are commanding ships right now that have 400, 500 hours of bridge watchkeeping time in their career.”

In contrast, as the bridge officer on a Royal Navy frigate for a six-month deployment, McGuffie stood watch for more than 2,000 hours – all of them logged." 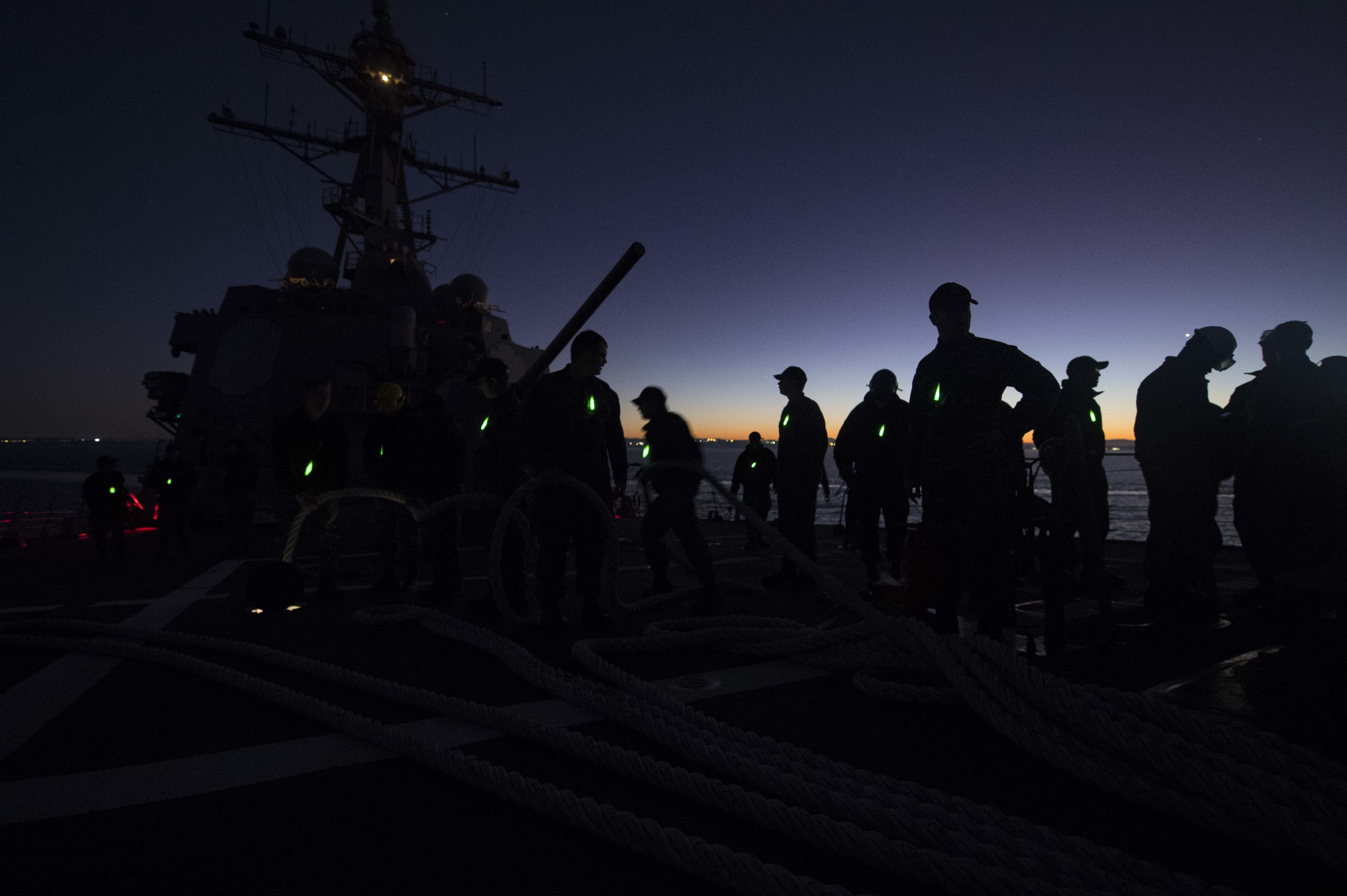 Readiness Lapses that Led to McCain, Fitzgerald Collisions Were Years in the...

Two of the world’s most sophisticated warships collided with merchant ships this year in preventable incidents that killed 17 American sailors. While those inside and out of the Navy are demanding answers to what caused the failures, the root causes...

"“People squeak through the system. They may be great officers and they may great engineers, but they might not have had a lot of time handling ships in busy waterways,” McGuffie told USNI News in an interview.
“We have guys that are commanding ships right now that have 400, 500 hours of bridge watchkeeping time in their career.”

In contrast, as the bridge officer on a Royal Navy frigate for a six-month deployment, McGuffie stood watch for more than 2,000 hours – all of them logged."

Unless you happen to be working on a supply boat and your rank is below 4th captain where you only accumulate watchkeeping time while the 3rd captain (chief mate?) is taking a dump.

Seriously. We put this to bed last week right?

Seriously. We put this to bed last week right?

Has anybody considered that some person or persons on the navy ships had orders to stop those ships in a manor that would not call attention to the cargo the ships were carring. Makes for a good conspiracy plot.

Someone who can write in legible sentences?

This is crazy, 650 yards, that’s about 0.3 miles. The captain had a requirement to call for CPA of less then 3 miles.

FITZGERALD
crossed the bow of a ship at approximately 650 yards, passed a second vessel at 2 nautical miles, and a third vessel at 2.5 nautical miles.
No reports were made to the Commanding Officer as required by his Standing Orders procedures
.
No course and speed determinations were made for this vessel by watchstander

Here’s the other report:

At MSC we have many deck officers who don’t have much time on watch. With all the extra third mates these days we have many who won’t stand a watch before they upgrade to second. Our second mates and first officers don’t stand a watch but keep advancing their license. I can name at least two licensed unlimited masters with maybe 100 hours of watch as OICNW, one of them might have half that.

Then again MSC is run with that USN mindset where watch is a collateral duty for the most junior officers.

More vessel generated crap only in the GOM for GOMERS. Apparently everybody onboard is a Captain or Engineer so when the tird capt has to crap he calls the first capt who works with the second capt OOPS the first capt is the Master shit I got’a go.

Welp, here we go. I’ll try and clear up the questions I saw above, as well as put my own take on things:

I agree. I am not familiar with that position. I assumed the OOD has the 'conn" unless the CO or a someone like that announced he was taking the conn from the OOD.

Not normally. There’s three officers on the bridge of a DDG under normal steaming: An Officer of the Deck, a Junior Officer of the Deck, and a Conning Officer. The OOD is generally the one with the most experience, and from what I understand is comparable generally to officer who would be on the bridge of a civilian ship(OICNW, I think it’s called?) This officer is in charge of the bridge watch, and is ultimately responsible for the safe navigation of the ship. The JOOD is basically just an OOD in training, and is generally one of the “middle of the pack” junior officers. They handle shit that the OOD might not have time for, like comms with Combat, supervising maneuvering boards or doing them personally. The OOD generally checks all this as well of course, as I said the JOOD is like an OOD in training. The “Deck” may be taken by the Navigator, XO, or CO at any time if any of those three feel the OOD is not doing their job.

The conning officer is responsible for giving orders to the helmsman, and is responsible for ensuring the ship remains on the proper track as laid out by the Navigator. This is overseen by the OOD. The Conn also takes general orders for where people want the ship to go and translates them into direct rudder/engine orders to the helmsman. For instance, if CIC has maneuvering control of the ship. For instance, the TAO may call for the ship to come right and speed up, but the TAO’s not on the bridge. The Conn would relay this to the helmsman in rudder/engine commands(Right standard rudder, engine orders etc). The Conn may be taken by the OOD or CO at any time, simply by that person giving a direct order to the helm. This would then be verbally announced by the now-relieved Conn so everyone was aware.

Now, as for the two collisions:

To me, the Fitzgerald incident screams of crew fatigue. Mistaken contact management, no backup from CIC or other bridge watchstanders, failing to recognize the situation even when surely the radars are showing contact and you have a pair of navigation lights bearing down on you. This is either the result of complacency on a level that strains belief, or a crew that was outright exhausted. Either one falls on the command’s leadership, it shouldn’t have taken a NAVADMIN from a goddamn 3-star Admiral telling people to let their crews get some sleep every now and then. Certainly if that level of complacency DID exist, well holy shit. It would be the highest level I’ve ever seen in my 12 years in.

I said I was reserving judgement on the McCain until more facts came out, and now that they have, hollllly shit. I asked some of our helmsmen on the ship how it would be possible to not know which station has helm control, and they all shrugged and basically went “It just tells you right on the screen, you’d have to be illiterate.” That no one was able to identify this problem in seconds and rectify it is outright negligence in the qualification process. This goes for Lee Helm as well, how the fuck do you not notice one of your shafts isn’t responding to ordered speeds for OVER A MINUTE?! This seems like a firm case of people getting qualified via the “omni-domni” method, and not actually learning what the actual fuck they’re supposed to be doing on watch and how to stand that watch properly. The decision not to set Sea and Anchor detail is mind-boggling. If your crew needs to be up early for a transit, then your damn crew needs to be up early for a transit. Move reveille and chow back a couple hours, and let 'em knock off an hour or two early the night before so they can sleep a bit. Ships do this all the time, it’s not rocket science to figure out “Hey I’ll just shift the schedule back an hour or two so I can have my crew and ship fully manned and ready for this transit which is known to be heavy traffic and difficult.”

This post got a bit long, but honestly I don’t even know that I got all my feelings out. I’m furious, my fellow Navy sailors died because one crew was probably worked into the ground and exhausted, and the other managed to create their own steering casualty and cut off a tanker with no actual equipment casualties anywhere on the ship. They just didn’t know how to drive it.

Barrien, I appreciate your explanation with regard the the Conning Officer. In my day, or at least my time on a DD, I do not recall having a Conning Officer as a part of the bridge watch. This is back in the 70’s as a JOOD on a Gearing class Destroyer built in 1945.

My previous post was corrected to reflect my experience in a different era, on an older DD, not a more modern DDG. My apologies.

I agree with your general take on the situation and find it alarming.