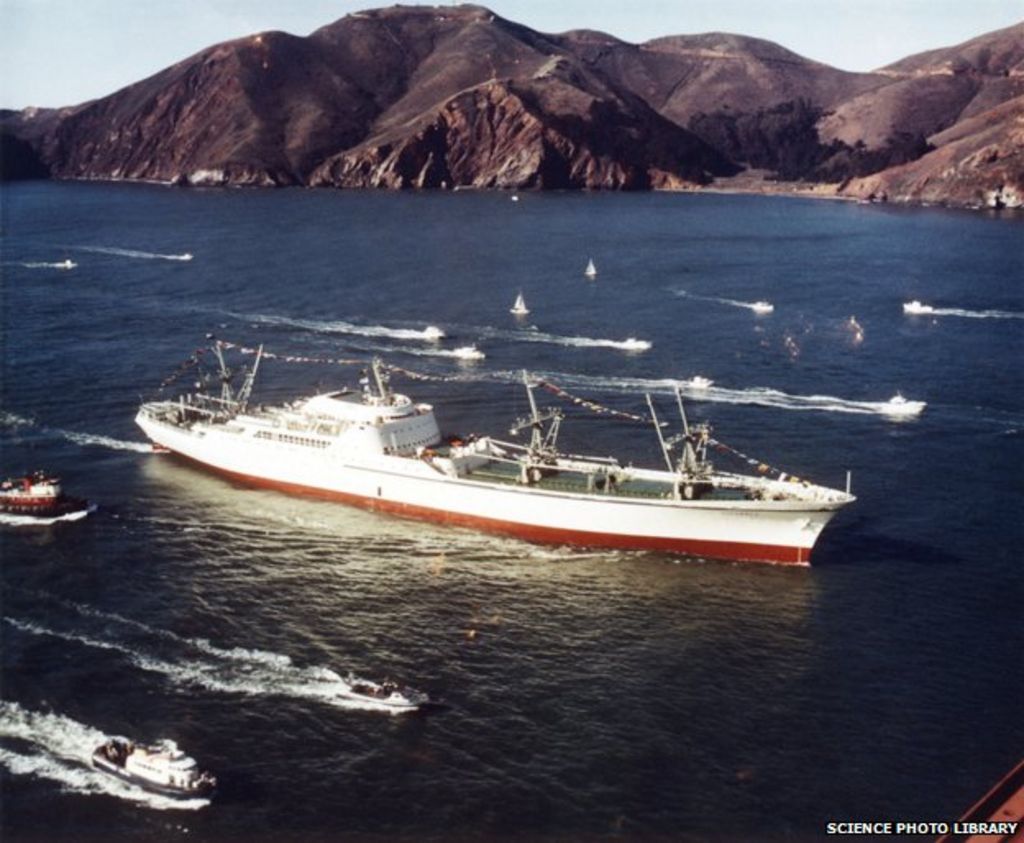 The ship that totally failed to change the world

Fifty years ago the world's first nuclear-powered cargo-passenger ship sailed on a publicity tour to persuade the world to embrace the atomic age.

The text may have been mashed by my phone so I’ve got the link up top. Here’s the text for the lazy.

Fifty years ago the world’s first nuclear-powered cargo-passenger ship sailed from the US to Europe on a publicity tour to persuade the world to embrace the atomic age. It didn’t quite work out like that.

Sleek in shape, painted red and white, its interior decorated in what was then ultra-modern chrome, the NS Savannah wasn’t quite like any other cargo ship.

It had facilities for passengers. The 600ft, 12,000-ton ship boasted a cinema, veranda bar and swimming pool. The cabins had no curtains. Instead, “polarised” windows, designed to cut glare, lined the sides of staterooms.

The ship was one of the few to spring directly from the imagination of a US president. In 1953, Dwight Eisenhower had made his famous Atoms for Peace speech, attempting to balance the growing fear of nuclear apocalypse with optimism about the possibility of civilian use of atomic energy.

And he wanted an atomic ship. A civilian one.

The NS Savannah, which cost $50m, was launched 55 years ago this week. It was to be an ambassador of sorts - the world’s first nuclear-propelled merchant ship and a symbol of safety and faith in the fuel of the future.

Stan Wheatley was one of those who were excited to be working on the ship. He was in the shipyard while the Savannah was built and served as the chief engineer on its maiden voyage. “The nuclear power system was a prototype, no question, but we were all trained well.”

Everyone was aware the ship was supposed to be a beautiful advertisement for nuclear energy.

“It represented the best-looking ship around and it still is a very attractive ship,” says Wheatley, now a member of the Savannah Association which works to preserve and protect the decommissioned ship that now sits at a port in Baltimore, Maryland.

In September 1964 the Savannah set sail for a tour of Europe, calling at Rotterdam, Bremen, Hamburg, Dublin and Southampton. Crowds lined docksides and many thousands of people, government officials and industrialists among them, boarded to inspect its facilities.

“It was a masterpiece of public relations,” says Will Davis, of the NS Savannah Association. "Everywhere it went, pictures were sent ahead and interest was created.

“The aim was to let other nations see the ship and experience it and that nuclear energy wasn’t a menace but a benefit.”

Despite the excitement, the Savannah failed in its diplomatic mission.

The ambassadorial voyage ended a year later but Savannah had failed to persuade the world that nuclear-powered ships were the future.

Just three other nuclear merchant ships were built - the German ore transporter Otto Hahn; Japan’s freighter Mutsu; and the Russian ice-breaking container vessel Sevmorput. Like the Savannah, they are no longer in service.

Other countries considered developing nuclear ships, according to Will Davis of the NS Savannah Association: “Japan announced a nuclear bulk cargo ship study, and of course West Germany built the Otto Hahn as an ore carrier. However, the UK and France both at separate times announced plans to build nuclear-powered ocean liners.” The preliminary design for the UK project - dated 2 December 1963 - is pictured above.

Unlike the commercial shipping industry, the military did embrace nuclear. Of the estimated 700 nuclear-powered vessels which have seen service over the years, including the 200 currently at sea, the majority are military ships and submarines. Dedicated Russian ice-breaking ships are the only civilian examples.

There is a future for nuclear power ships, it’s just a matter of time.

The nuclear ship pioneers suffered problems. On its maiden voyage in 1974, the Mutsu started leaking radioactive material 500 miles (800km) off the coast of Japan. It was allowed to return to the port of Ohminato for repairs despite lengthy protests by fishermen and residents. A faulty reactor shield was blamed amid a wave of global publicity.

The Savannah itself experienced similar problems. It was set up to store a volume of radioactive waste that was quickly surpassed. Just in its first year, 115,000 gallons of low-level waste was released into the sea. Storage space was subsequently increased but small volumes of waste continued to be released.

The spectre of environmental damage would always count against nuclear ships. “What can float, can sink and as we have learnt with oil spills, it is not if, but when. And when it does happen, it could be an environmental catastrophe,” says Dr Paul Dorfman, founder of the Nuclear Consulting Group and senior researcher at the University College London’s Energy Institute.

Cost was another downside. A ship with a nuclear reactor is always going to cost more. While the US’s Nimitz-class aircraft carriers are all nuclear-powered, it was decided that the UK’s new Queen Elizabeth super-carrier would use a combination of gas turbines - fuelled with kerosene - as well as diesel engines instead for cost reasons.

The cost concerns of nuclear are obvious. The reactor costs much more to build than a diesel engine. But on top of that, maintenance and eventual disposal of redundant reactors present unpredictable costs.

Nuclear cars: A number of concept cars were proposed after WW2, although none were ever produced. Most famous of these was the Ford Nucleon in 1958, which was to be run from a small nuclear reactor in the engine - based on the assumption that this would one day be possible.
Nuclear planes: During the Cold War, both US and USSR researched possibility of building nuclear aircraft which would be able to carry bombs and stay in the air for extended periods of time - the idea was superseded by the advent of inter-continental ballistic missiles.

Nuclear trains: Russia has reportedly expressed interest in the idea of nuclear-powered locomotives over the years; in 1956 the USSR’s ministry of transport suggested such trains could be used in remote areas of Siberia. In 2011, another project was said to have been*given the go-ahead

But there is a plus side. The initial price of a nuclear-powered ship would be considerably more, but because commercial uranium is cheaper than conventional fuels, the fuel cost for a nuclear ship is much less, says John Carlton, professor of marine engineering at City University, London.

Nuclear-powered vessels can go years without refuelling, covering great distances. The Savannah was capable of circling the planet 14 times at 20 knots without needing additional fuel.

But despite the massive practical obstacles, blue-sky thinkers are starting to again discuss the concept in an age of concern over climate change and consistently high oil prices. Nuclear power ships emit no CO2 and greenhouse gas. Wheatley says that makes them pretty attractive.

“In due time it will happen, the prospects are reasonable for a resurgent of nuclear power, there is a future for nuclear power ships, it’s just a matter of time.”

But several challenges must be met.

Ports with facilities for accepting nuclear waste and refuelling ships with uranium would need to be built.

And the fiendishly complicated issue of insurance and accountability when an accident occurs must be settled, Dorfman says.

There are countries that refuse to accept the docking of nuclear ships. “Significant regulatory agreements would need to be signed before anything could happen”, says Dorfman.

And most of all, the gut-level scepticism about floating nuclear reactors must be met. It might require more than a publicity voyage or two.

As far as I know the Savannah is tied up in Baltimore.

Thought it was in Charleston SC?

I fueled across the dock from her in Baltimore a few years ago. The article also says she’s moored there.

What do you guys think of this ship? I personally think it’s just a failed PR attempt by the government to try to convince the public about the merits of atomic power, which I am not too big an advocate for. I think most people still think that the China syndrome can really happen. I think most people think nuclear plants can turn into the Fat Man or Little Boy by a kamikaze Cessna pilot. Then is my favorisite when radiation is reported using various units such as curies, sieverts, rad, and rem, jumping from unit to unit without really explaining what each unit means, how radiation sort of dissipates with time, what effects various doses have on life, or that most people on earth are subject to natural radiation all the time. I don’t think the NS Savannah did a very good job dispelling any of these myths or educating the public.

Besides all that, I think the NS Savannah is a very interesting ship. Now that I know that it is moored up close to my home I think I’m going to go down to Baltimore to check her out during my next time off. I would love to find out the technical stuff about her reactor, especially the operating temperature and pressures of the primary and secondary loops. Years ago someone was telling me the steam in the secondary was super heated. It didn’t believe him so I need to find out.

Nice find Tugboater and thanks for sharing.