The exact configuration of the T boat I worked on for one month. The “escape” hatch wasn’t intuitive like another set of steps and required effort to reach and access. Even if one heard an audible alarm, had knowledge and was capable of expending the effort while inhaling smoke one still ended up in the same area as the primary escape. Hence, for all practical purposes there was no separate second means of escape.

FYI - it would be quite rare for anyone to stand anchor watch on a yacht being sailed for fun. We’ll do it if conditions are nasty, but much more likely is we try and find a good spot to anchor in the first place. It also isn’t unusual for the boat to be left empty while everyone is ashore for dinner or shopping.
Now if I had paying passengers crammed like sardines in a hold with limited exits and it was my JOB to run the boat…damn straight someone is up/

It also isn’t unusual for the boat to be left empty while everyone is ashore for dinner or shopping.

Get real. Anchoring off Santa Cruz island has nothing in common with anchoring in a basin near your favorite yacht club for dinner and drinks.

I am sure it does not, but even so most couples on a pleasure cruise are not standing anchor watches in benign conditions. See this incident, the people on the sport fisher were sleeping

Reportedly, they were. I agree that on a pleasure yacht, it’s a personal choice dictated by the circumstances. I anchored off the south side of Santa Cruz island while instructing a couple on their sailboat who were preparing to go cruising and wanted some professional coaching. As effectively the master on board and after checking the weather, I let everyone go to sleep. I was a beautiful night, little wind, calm water and no change in the forecast. Big mistake.
At about 3 in the morning, all hell broke loose and I was awakened by the anchor chain banging loudly on its roller, a strong wind was gusting from the south pushing steep waves into the shallow cove. Luckily for me, the anchor held but the boat was hobby horsing violently and I didn’t expect it to hold much longer. The wind had spun us around 180 degrees bringing our stern dangerously close to the beach. Needless to say, I motored out of there while instructing the owner on retrieving the anchor and headed away.
An embarrassing lesson learned on my part. I never anchored anywhere off that island without an anchor watch ever again.

After a quick skim of Subchapter T, am I correct in understanding that this vessel is not required to meet SOLAS requirements? Specifically photo-luminescent (glow in the dark) signage? Based on that photo I think you’d be hard pressed to find this exit in the dark, with or without smoke. 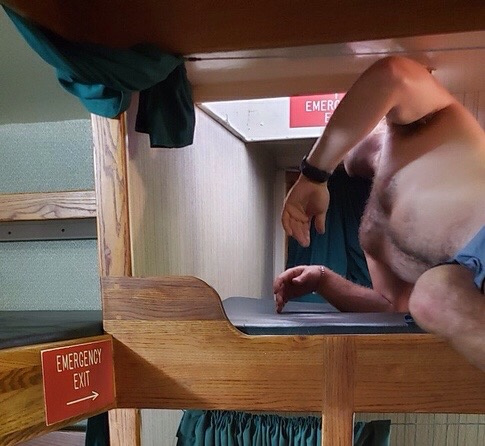 I think that is correct, no SOLAS. I don’t know much about the regs in this case but from this thread my understanding that boats grandfathered in don’t have to meet current Sub Chapter T regs.

I didn’t dig into it but from quick look I don’t think that exit meets current regs.

The offical NTSB Accident Number for this tragedy is DCA19MM047. The docket does not appear to have been opened yet. Once it is, you can find it by going to:

and searching on the Accident Number.

I believe the hull was glass over ply.

6 posts were split to a new topic: Realism in Fire and other Shipboard Drills

What do you want to note about it? It was predictable. Has there been some evidence released about it?

A new safety alert will be issued by the CG (within days probably…). ’ Cause it’s in the news, not because of any proof… And that Safety Alert will be trumpeted as proof, otherwise the sagacious CG wouldn’t have issued it.

What is interesting is the lack of comment on maintaining a watch required by the rule ctony referenced. So does the lack of bullet point for that mean that wasn’t an issue?

Has there been some evidence released about it?

From what I have seen there has been nothing official released as of yet other than the cause of death for the victims was smoke inhalation. Everything else at this point regarding cause is pure speculation.

If they did keep a log, and records of training and drills, it got lost in the fire.
Safe to say the uscg has inspected the other two boats, and I am curious to hear if they found a deck log and records of drills/training on board those two boats. 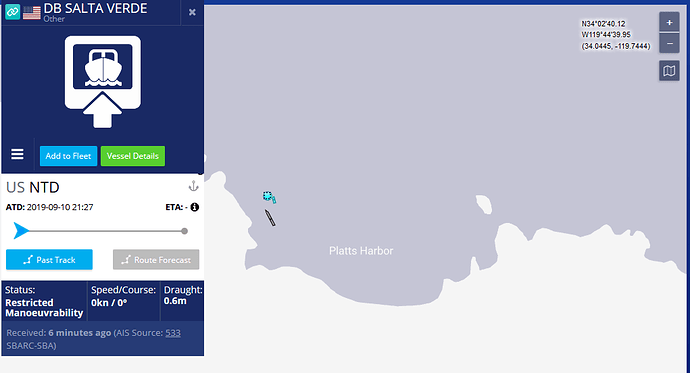 WASHINGTON - The Coast Guard assistant commandant for prevention policy, Rear Adm. Richard Timme, announced Wednesday that he has convened a formal Marine Board of Investigation (MBI) to investigate the loss of the small passenger vessel Conception .

The Conception caught fire and sank in the early morning hours of Sept. 2, 2019, just off Santa Cruz Island in California. Only five of the 39 people onboard survived.

A commandant-directed formal Marine Board of Investigation is the highest-level marine casualty investigation in the Coast Guard. The marine board consists of four members who will investigate all aspects of the casualty including, but not limited to, the pre-accident historical events, the regulatory compliance of the Conception , crewmember duties and qualifications, weather conditions and reporting, safety and firefighting equipment, and Coast Guard oversight.

Separately, the Coast Guard Investigative Service, the Federal Bureau of Investigation, and the Bureau of Alcohol, Tobacco, Firearms and Explosives are supporting a Department of Justice investigation and will work in close coordination with the US Attorney’s Office. The Coast Guard’s Marine Board of Investigation will coordinate directly with DOJ before seeking additional information from a witness, seeking new evidence or holding public hearings.

“ The Coast Guard is deeply saddened by the tragedy that occurred near Santa Cruz Island,” said Capt. Jason Neubauer, chair of the Marine Board of Investigation. “Our hearts go out to the victims, as well as their families and friends. The Coast Guard will conduct a thorough and detailed investigation to determine potential causal factors associated with this tragedy.”

During the course of the MBI, panel members must decide:

A MBI is a lengthy and detailed process that may take a year or longer to complete. It consists of witness interviews, public hearings, and evidence collection and analysis. However, the Coast Guard does not have to wait for the Board’s final report to implement urgent and necessary safety actions.

“In some instances, our marine casualty boards identify pressing safety issues related to vessel stability, the engine room, or lifesaving and firefighting equipment,” said Neubauer. “In those instances, we issue safety alerts or bulletins to ensure a wide spread dissemination of the most recent safety guidance. All of our safety notices and lessons learned from investigations are also publicly available online through our Coast Guard Office of Investigations and Casualty Analysis website.”

The Coast Guard issued just such a safety bulletin September 10, urging mariners to:

The safety bulletin is available online.

An e-mail has been set up for witnesses or anyone else with information about the vessel or the marine casualty. This e-mail will be checked regularly. The e-mail address is: accidentinfo@uscg.mil.

What do you want to note about it? It was predictable. Has there been some evidence released about it?

I simply wanted to note that it is the first safety alert issued about hazards of carrying and recharging consumer grade lithium batteries on board passenger vessels. Other safety alerts and studies focused on carrying such batteries as cargo, or the use of lithium batteries in onboard power supplies. There is one mention of concern in the USCG Proceedings of the Marine Safety & Security Council:

The only other mention is an alert about the Samsung phone fires in 2016.

IMHO, we have here an example of an “emergent hazard,” that is, one that arises from multiple factors, each of which appears benign in isolation but are concerning when taken together. The total amount of lithium on board from 33 individuals’ phones, laptops, tablets, video cameras and dive lights must have been significant. Even if we discount the probability of thermal runaway during charging, the amount of lithium could have contributed to the speed and intensity of the fire. Again, just an observation, I could be wrong.

They’ve been up there for a few days now. Last night the local news was saying that the weather hasn’t been cooperating for them to raise the hull. They were anticipating raising it this morning, haven’t heard any more updates.

Up to 267 posts here and with a report out mostly stale info, so I’m starting a new thread.