I was a regular caller at Busan years ago and the pilot boarded a fair way into the port.

Are you talking about Old Pusan or New Port?

At New Port the pilot station itself is somewhere just east from the end of that first breakwater.

That’s not to say the pilot came from the pilot station, he might have hopped off an outbound further in but that’d be a longer run for the boat.

So you’re saying the pilot boarded after the ship had entered the port, steaming at 8 kts and within sight of the pier?

In this case not likely because the pilot boarding area further out is in well protected waters but it’s not uncommon in “breakwater ports” for the pilot to get on inside. In small ports the pier is sometimes close. Eight knots might be little hot especially if there’s no room to slow down or make a turn to bleed off the speed.

In small ports the pier is sometimes close.

Some South African ports come to mind. But even then, this fubar is hard to explain away.

I know better than to tell the story of how I came sliding in that one time, half-fast ++, because I’ll get a lot of well you shoulda looked at the chart a little closer and not come in so fast. Yeah, well no shit.

We have all been there.It’s called experience and what not to do because we have done that and won’t do it again. Most of us knew/know what happened here before the simulations were demonstrated. Some very good mariners on this site that can see through this incident. Yes, hindsight is 20-20, but this one is a no brainer. Always preached to my mates, Speed Kills.

So you’re saying the pilot boarded after the ship had entered the port, steaming at 8 kts and within sight of the pier?

I have no idea of the pilots qualifications and how he got aboard this very big ship. But it seems speed was much too high and that was the fault of the Master. What was the hurry?

What was the hurry?

KC has the answer.

A post was merged into an existing topic: A Master’s Guide to Berthing - & etc

A post was split to a new topic: A Master’s Guide to Berthing - & etc

…I was taking the ship across the bay to the yard and the pilot got cancelled, too windy. Had to anchor. It was like trying to steer a ping pong ball…

The somewhat erratic AIS-speed changes of Milano Bridge, inside the basin, let me think:

Could it be that, when they discovered the implications of the forgotten ballasting, already inside the port, they just had no options to go anywhere?

Some helpless full ahead did no good at lower speed; the strong lateral movement of the stern destroyed their hopes…

I did some calculations on the shortest stopping distance of the Milano Bridge when decelerated by one tug that should be pulling with full power and in line with the ship’s center line. From the link shown I used for the calculations the data of the 3200Hp Z-peller Harbour Tug as used in Busan with a maximum bollard pull of 42.5 tons.

Beware, these are rather rough calculations by lack of all the data. For example the backing power is unknown, I assumed a ship with a stopped engine. Also the friction resistance was left out. At these low speeds and the fact that the speed factor (V^2) will go down quickly this is not very important.

First was calculated which power is required to stop the ship in one ship length of 365 meters.

It can be calculated that for a modern tug with a maximum bollard pull of 80 ton that stopping distance is 564 meters and the time required 376 sec or about 6.27 minutes With a good sized quay slot this would be about right.

Looking at the figures I have the idea that for this type of mega ships the present tugboats are unsuitable, larger power is required to control these ships in the right way especially under adverse circumstances.

5 posts were split to a new topic: Strength of Deck Fittings and Tug Bollard Pull

Braking a ship has always been a difficult exercise where many things can go wrong. The track reach in the full astern stopping test should not exceed 15 ship lengths. However, this value may be modified by the Administration where ships of large displacement make this criterion impracticable, but should in no case exceed 20 ship lengths.

In the late 80’s a paper was published suggesting that an immediate “Full Astern” from full sea speed was not the most efficient or shortest method of stopping a ship. The preferred method was to reduce engine speed until it was slightly below ship’s speed, as the ship’s speed falls further reduce ahead revs until below ship’s speed. The theory was the braking effect of this was greater than that given by the propeller rotating astern with headway on the vessel.

Another method to reduce the ship’s speed with about 70%, while at the same time also reducing the track reach, is to make a Williamson turn or a full circle, providing there is sufficient room available. Also slewing the ship, turning the helm from hard over to hard over the other way before the vessel starts to swing, is used to reduce these large vessels’ headway. It is advisable to use the rate of turn indicator as then the first signs of movement can be seen on this instrument before the human eye can detect the start of the turn.

These days the combination of slow-speed two-stroke engines and fixed pitch propellers has been identified as the origin of the unacceptable length of stopping distances in cases of emergency. Also the Milano Bridge probably falls in this category as the engine speed and the rpm are the same, in this case 74. The disadvantage is that when the fuel supply is shut off the water flow due to the ship’s speed will resist the stopping of the propeller. This has to be forced by injecting air or even water into the cylinders. It takes quite some precious time between the stopping order and the moment that the engine can be started in the astern position. The picture shows that only after 5.5 minutes of the total stopping time of 12 minutes, the engine is giving full astern power. Up to that time the ship does an inertia stop, losing speed mainly due to hull friction, after that it is a real crash stop. It’s worthwhile to note that the speed curve, after that the full backing power is available, does not show a sudden extra decrease in speed. This is explained further on. Only after 7 minutes of the 12 the revs are up to -50! 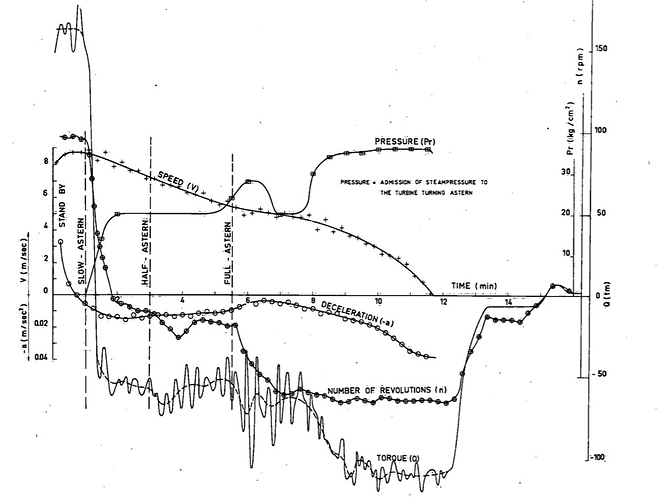 According to this paper the stopway is very little influenced by engine maneuvering and developed power while going astern although it has more effect with a slow speed. The slight influence of the astern power may be explained by the effect of suction of atmospheric air in the propeller. Elimination of the kinetic energie is accomplished mainly by means of the hydrodynamic hull resistance and less by engine backing power,

Typically when approaching the pilot station or anchorage we start slowing down about 10 miles out, that gives 7 miles on the program and than 3 miles to get down from 12 kt to the 3-8 kt speed required to pickup the pilot / anchoring.

Fastest way to get down from 12 kts is put the ship in a turn. The ship will turn faster therefore slow down faster with an ahead bell.

That all makes sense. I never experienced a crash stop, which is for the better. Always slowing down from a distance, I believe it was 6 or 8 miles but then these ships were so much smaller and the speed between 10 and 16 knots with the exception of one ship I was on that did 21 knots. It was a turbine ship and braking was troublesome.

Have you ever tried slewing? I am curious how that works brakewise.

Below 5 knots (if a bowthruster is equipped) hard rudder in one direction and the thruster in the opposite to counter the rudder can put a decent “barn door” drag on her.

Have you ever tried slewing? I am curious how that works brakewise.

Typically we endeavor to slow down in advance but it’s not always practical. For example in some ports if you’re going too slow sometimes another ship will jump ahead and steal your pilot and your tugs. Big delay.

On the other hand the ship can be 1.2 miles from the pilot station, coming in just right and port control will call and tell you to stop the ship and hold 1 mile from the station. Zig-Zag works good rubbing off speed but big turns are more effective then small ones, problem being for one it can confuse meeting ships as to your intentions.

One vessel I sailed in had two 12 cylinder MAN main engines. Putting the telegraphs to the harbour full ahead position started the slow down programme and about 60 to 65 minutes later the ship had slowed to 16 knots. It was a bit like driving a car where you had the steering wheel and a blind deaf person had the accelerator and the brake.
I went into fog in the English Channel and things were going to go South if we stayed at 27 knots so put the telegraphs to stop. That worked just had to beat of the engineers with a stick.