How the hell do they do it?

I have always been amazed that these cranes can be carried by ships at sea then moved ashore. 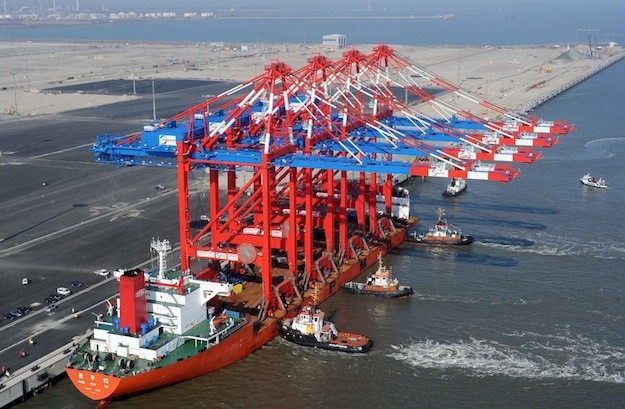 The massive Super-Post Panamax container cranes are capable of handling vessels up to 25 container rows wide, meaning the cranes, and port, will be able to accommodate the world’s largest containerships — Maersk’s “Triple E” class containerships will measure just 23 container rows wides.
Each crane weighs in at 1,750 tons with a usable jib length of 69 meters and a load bearing capacity of 120 tons. 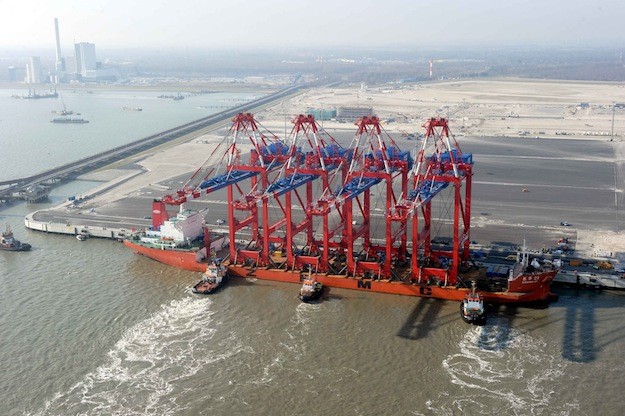 Container Terminal Wilhelmshaven has ordered a total of 16 of these massive gantry cranes that will eventually line the Wilhelmshaven quay wall. The first phase of development, which is expected to go into operation by August of this year, included the order of eight of these cranes that will span a 1,000m section. A second container vessel carrying four more cranes for the first phase of development is expected to depart from Shanghai soon.

“We view these container cranes as an investment in the future,” said Marcel Egger, managing director of EUROGATE Container Terminal Wilhelmshaven GmbH & Co. KG and member of the EUROGATE Group management. “Currently the world’s biggest container vessel with a load capacity of 15,550 TEUs has 22 container rows on deck, while all other mega carriers, including the 18,000-TEU ship on order have 23 container rows on deck.”

The container gantries will be moved ashore one by one during the coming weeks and made ready for trial operation.

Of course we know they can, but how in the hell do they maintain stability during a transit!

Magic but these guys claim to be able to do it with technical skills and planning.

Look at that ship passing under the Gate, it ran into weather that rolled the ship until the ends of the crane booms were in the sea. Their concern was seawater damage to the cranes. I think I would have had other things on my mind at that time.

I agree about the rolling the booms under. I’d probably be looking hard at the lifeboats and trying to think of how in the hell they could be safely launched.

We have moved a few of these on our barges. On a trip from LA to Dutch our tug went backwards for 2 days in a strong headwind, a lot of wind effect that high up!

Saw one of those ships last summer off the coast of West Africa. Vessel had a Chinese name, and the AIS said it was going to Egypt.

I was thinking the same thing, how do they keep that think sunny side up?

I’d like to see a video of them offloading these things, just another part of the evolution that I find amazing.