The question for me is how do you test this? I’ll try any number of headings and speeds in heavy seas to find one that eases the ship best, but stopping the engine to try this method could just as easily put the ship into a catastrophic roll that shears cargo off the deck. I’m familiar with the method I just don’t think I’d have the stones to try it for the first time unless forced to do so by losing the plant.

As far as testing, car ships routinely shut down and drift waiting for berth availability if the weather is suitable. One thing to be avoided is going through all the trouble of having the engineers prepare to shut down only to find it’s too rough to drift.

Over the years of doing wxobs I’ve gotten better at estimating swell / wave period. It’s good practice to compare rolling period observed / calculated. I’ve gotten so I can call it in advance most times.

I’m going to stick with thoroughly watching the weather and staying as far as possible from danger.

Preaching to the choir.

2 Likes
Offshore Tug Bourbon Rhode in Distress After Getting Caught in Hurricane Lorenzo
Kennebec_Captain October 9, 2019, 11:53am 2

I have no experience on this type of vessel but in general the issue is the point where the window between going into it slow enough vs loosing steerage becomes too small.

The other issue is in a TRS the fury has no specific direction. In confused seas pointing into the wind and heading in to the largest seas is not necessarily the same thing.

I have been following the discussions here with interest, and sometimes distress, and have some experience of dealing with adverse weather on an offshore vessel. In the early days in the North Sea when storms approached we used to be sent for shelter, usually in the nooks and crannies of the Shetland Islands, but we found that the approach of a “weather window” would require us to return to the location, with it still blowing a hooley, and this resulted in damage to the ship and sometimes the loss of the cargo, so in the end we would just hung about and wait for things to improve, doing what the fishing industry called “laying and dodging” usually without any damage. I also had the opportunity of testing the capability of my ship to ride out adverse weather with the engines stopped, since we were looking after a rig well north of the Shetlands for the duration of a well, with no cargo on deck. We found that with the engines stopped the ship would lie with the weather on either quarter and would be comfortable with dry decks up to a wind speed of about 50 knots.

Lying with the weather on either quarter is in line with my experience. The raised forecastle and accomodation block causes the vessel to weathercock but this exposes deck penetrations on the back deck to the full force of the sea.

I can see taking seas onto the deck instead of the bow could be a problem. But strictly speaking not “the full force of the sea” as the ship yields to the seas to some extent.

Largest monetary loss for a maritime incident at the time. 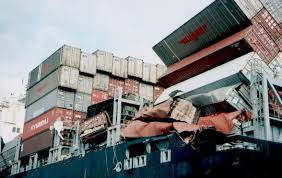 This is from Outside magazine Monsterwellen - It’s several stories weaved into one but one story is about the APL China incident which went against conventional wisdom.

The peril of the sea that modern merchant mariners are most likely to face, navigational wisdom holds, isn’t a monsterwelle but something known as “synchronous rolling,” so called because the natural roll period of the ship falls in sync with that of the waves.

The ship’s captain did exactly what all captains are trained to do: He hove to, immediately turning into the oncoming waves and slowing down, letting the ship ride up and over.

The ship took the heavy rolls while the ship was hove-to into the seas. At first everyone assumed the crew was lying about what happened.

When lawyers questioned the officers in Seattle, what they heard strained credulity. The scuttlebutt at the longshoremen’s union hall had been that the ship had lost power and gotten caught in the trough between waves. But the officers claimed that the engines had failed after they watched the container stacks fall. Before it ever lost power, the ship had rolled wildly, inexplicably, they said,

The article explains how it was learned it was a case of parametric rolling which was mostly unknown to mariners:

Like the lawyers representing the cargo owners and their underwriters, France was at first skeptical about the story recounted by the China 's crew. The details didn’t make scientific sense.

APL China’s captain’s testimony about what happened while hove-to.

A seasoned mariner from India who’d been captaining container ships for 15 years, Guard was an exceptionally expert witness, France said. In a deposition lasting three of the six days that the China spent in Seattle, Guard reconstructed the voyage day by day, then, as the time of the disaster neared, hour by hour, then minute by minute, corroborating his testimony with entries in the logbook. While that testimony isn’t in the public record, one very telling quote from it is. Just before the containers began to fall, the ship had suddenly become “uncontrollable,” Guard testified, "as if there were a devil in it

If Parvez Guard was to be believed, the China , already hove to, couldn’t have fallen prey to synchronous rolling. Furthermore, the waves were too close together to sync with the ship’s roll period. But in 1973, experiments conducted with a scale model revealed that the hull shape of container ships made them vulnerable to a kind of rolling rarer and quite possibly more dangerous than synchronous rolling: “parametric rolling,” so called because it occurs not when a ship’s roll period is in sync with the waves but when the waves come exactly twice as fast as the ship rolls.

According to models had the captain just shut down in the worse of the storm no contains would have been lost.

If such a ship in such conditions had lost power, it would have drifted into beam seas and, because the waves were out of sync with it, rolled no more than 15 degrees not enough to snap the lashings.