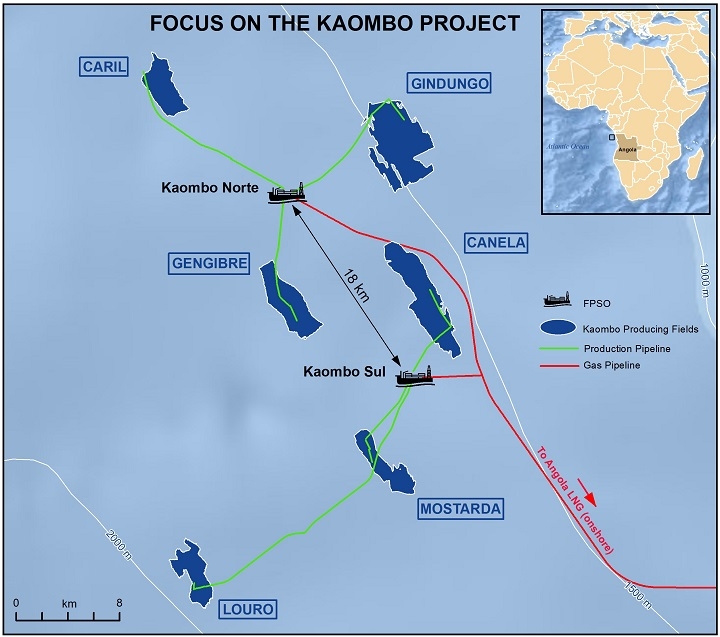 Total has started up production on Kaombo Sul, the second Floating Production Storage and Offloading (FPSO) unit of the Kaombo project, located on Block 32, 162 mi (260 km) off the coast of Luanda, in water depths ranging from 4,593 ft to 6,562 ft...

I was involved at a very early stage of this project, namely the arrival of the two VLCCs at Sembawang Shipyard for conversion to FPSO.
I attended on board as MWS on both for the final voyage from AEW to Sembawang and to approve the mooring arrangement at the yard, where they were expected to spend >18 months afloat without any propulsion or winch power.

Sept. 2014: VLCC Olympia (320000 dwt) leaving Eastern Working Anchorage, Singapore for Sembawang Shipyard to be converted to an FPSO. Here in Johor Strait, passing Pulau Ubin to Stbd. and Changi Point/Loyang Marine Base on port side:

Moored at Sembawang Shipyard, with all new mooring ropes and all bollards tested for allowable load:

Escort tug attached for the passage through Johor Strait:

Good pictures thanks for the share. I enjoyed learning a little about this region.

I think this photo might be of the project? If I am incorrect let me know?

Yes you are right. That is the Kaombo Norte, ex Antarctica, under conversion. (Still moored at the same place as when I left her)
PS> The white “structure” you see there at right is the gambling boat Leisure world:

They also converted one of the icebreaking Aframax tankers into an FPSO:

I bet the sister ship, which remains in tanker service for the time being, is also an interesting candidate for FPSO conversion - that ice class hull has lots to give for corrosion and the diesel-electric power plant is useful in the second life…

That would be this one:
https://www.offshoreenergytoday.com/tag/la-noumbi/

That is the least amount of processing equipment I have seen on any FPSO. May be explained by the low oil and high water content in the well stream. Low associated gas content is also evident from the flare arrangement, although not mentioned in the text.

Working in shallow waters in the Congo River mouth with a 16-point anchor mooring spread and off-loading arrangement at bow only.

What type of mooring system provides the greatest amount of production capacity at moderate depths?

The system you describe above with the 16 point - is that called a Catenary type system or something else?

Yes it is a catenary spread mooring system, with high hold Stevprise anchors and probably heavy chains. This system is suitable for permanent moorings in shallow water and benign conditions.

The Congo River mouth fits that description, but it also have hard bottom and VERY strong current. (I know from moving rigs and working with construction barges there back in the 1980s)

I would suppose that there will be more anchor legs in the up-river direction, which would be stern of the FPSO, to allow for easier mooring of export tankers connecting to the bow with a single hawser.

PS> The “bible” for mooring systems, anchors and anchor handling is the Vryhof Anchor Manual, which can be downloaded free here:

Vryhof is the trusted partner to most offshore industry's leaders, delivering innovative and customer-focused anchoring and mooring solutions. We are committed to the highest standards of safety and integrity. We are proud of our legacy and...

What type of mooring system provides the greatest amount of production capacity at moderate depths?

That depends on what you consider “moderate water depth”?
Not an easy thing to answer, since it also depend on the type of vessel/structure to be moored, whether permanent (years) or temporary(weeks/months) and what is the purpose/ operation to be conducted. Of course also on the weather conditions, swells and current, as well as bottom conditions. (Rocky, hard, medium or soft soil)

For any long term mooring Metocean study, Geotechnical study and Mooring Analysis is carried out based on 10-, 100, or even 1000-year return conditions.

PS> You may want to watch a series of videos from Vryhof, which is quite explanatory: http://insights.vryhof.com/blog/chain-inspection-with-mats-sohlström-

Thanks for all the good info. Based on what I have read FPSO has good growth potential in the next several years.

The FPSO market is expected to grow strongly in the next few years, according to Rystad:

Norwegian oil and gas intelligence firm Rystad Energy expects 33 FPSO vessels to be sanctioned from 2019 to 2021 as oil and gas activity picks up.


Incl. in harsh environment and even in Arctic waters:
https://www.forskningsradet.no/servlet/Satellite?cid=1253963285497…target…

The potential in the US is not as good, although more deep water fields are likely to be developed in the years ahead. Whether it is from regulatory reasons, or something else I don’t know.

So far only two are operating in US waters:
https://spe.org/en/print-article/?art=809

Thanks for interesting articles. I have never understood why they use second hand, old (20 years +) VLCC hulls to put new, expensive FPSO modules on. I think hull new buildings are better and that the shape should be like a life buoy:
http://heiwaco.com/fpsonew.htm .

Anyway, the cargo oil tanks must be accessible for maintenance, when other cargo oil tanks are full of cargo/gas, so it is important that the IG system is correct. You cannot use an old SOLAS type IG tanker system on an FPSO.
http://heiwaco.com/fpsosystem.htm

I can assure you it is interesting to look for structural cracks inside an oil tanker VLCC cargo tank, with the surrounding tanks full of cargo:

SBM is very active building standard hulls to be fitted out with more or less standard processing equipment to suite the market for fast track development of fields around the world:

Dutch FPSO operator SBM Offshore has signed contracts with China Merchant Heavy Industry (CMHI) for the construction of up to four FPSO hulls. The contract consists of a firm order for one unit and options for another three. The hulls will be built...


The old standard was that every FPSO was tailor made for long term contracts in a specific field.

If reused in another field most of the processing equipment had to be changed, or modified to new specific needs.

This could also apply to the mooring and offloading method and equipment.

It seems the new SBM Offshore FPSOs are just double hull pontoons with 18 cargo tanks and no propulsion. They will be towed around to the various fields of operations. Mooring and electric power systems will differ.

What is the “shelf life” of a FPSO?? Shell would like to know:
https://www.hartenergy.com/exclusives/shell-develops-real-time-evaluation-technology-fpso-brazil-31746

An FPSO is coming to a gulf near you:

Mitsui and MOL have participated in a long-term charter business operated by MODEC for the purpose of providing a FPSO for use in the Area 1 block.

Well, Mitsui and MOL are getting very old and never understood the offshore biz even if it is shallow waters.

I’ll tip them off that they should contact you for some good advise on everything.
I’m sure you’ll set them straight and teach them a thing or two about the offshore industry that nobody else know, or understand.

Thanks! BTW, how far is this shallow water, 32 m depth Area 1 block from shore.

Here’s your answer:
https://www.compelo.com/energy/projects/area-1-offshore-development-mexico/
MODEC is waiting anxiously for your advise.

Thanks. So the FPSO has capacity 900 000 barrels and the daily production is 90 000 barrels, so there will be offloads almost every week. But they start slowly - only 8 000 bod. There is also a pipeline to shore … so what is the purpose of the FPSO? And then there is 75 million cubic feet of gas a day to handle. Any idea what is done with it? Just burnt off?