Technology developed during World War Two is to be used as a back-up for GPS.

The General Lighthouse Authorities (GLA) have announced that they have installed a system called eLoran in seven ports across Britain.

The GLA say many critical instruments on ships use Global Navigation Satellite Systems, and if they fail the consequences could be disastrous.

Read an article in the latest Marine Link. Guess there was public comment about a US reboot back in March. H.R. 1678 is the Bill and on the Govt site it says there is a 1% chance of it being enacted. I wonder how accurate that is. I suppose there wasn’t much in the way of public comments . Too bad really. This is a much needed backup system.

A bi-partisan group of legislators led by Congressman John Garamendi (D-Calif.) has introduced a bill that would require the U.S. Secretary of Defense to establish a backup for GPS within three yea… 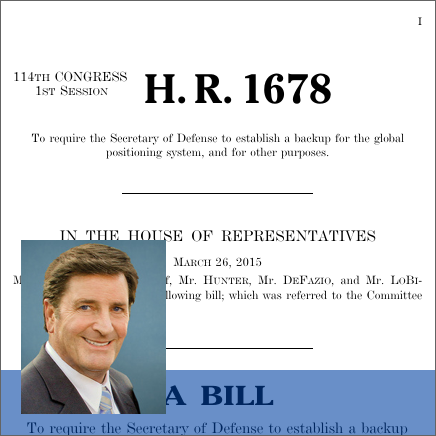 National Positioning, Navigation, and Timing Resilience and Security Act of 2015...

To require the Secretary of Defense to establish a backup for the global positioning system, and for other purposes.