I’ve often seen the more common type at sea, sometimes very intense, but never the reverse kind. Any of you ever witnessed it? 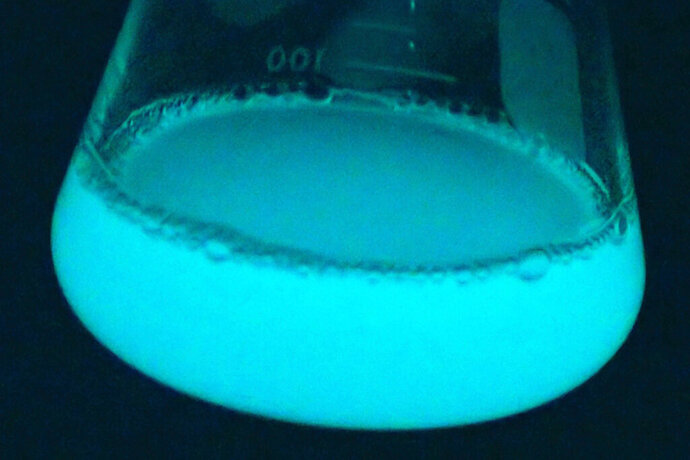 They Couldn’t Believe Their Eyes: The Ocean Was Glowing.

Satellites previously detected a giant bioluminescent bloom in the Java Sea. Researchers found a boat crew that sailed through it.

it’s what they were drinking tossed over!!

Note; The Java Sea is the body of water NORTH of Java and South of Kalimantan. (Borneo)
This phenomena happened in the Indian Ocean according to the article:

Then it hit her. From horizon to horizon, from stern to bow, the sea all around them was glowing as their 52-foot-long ketch passed south of the Indonesian island of Java on a moonless night.

The satellite observations revealed that the glowing patch south of Java, Indonesia’s most populous island.

Hahaha. Quite a feat to be visible by satellite!

It is a common phenomena seen especially in warmer waters, but then only when waves, fish or dolphins etc. “stir the water” containing the algae that cause it.
It was part of Norse Mythology under the name Moreld:
Moreld is a light phenomenon in the ocean caused by bioluminescence in some plankton species . Moreld is visible in the dark when there is turbulence in the water, and is particularly widespread in the autumn. In Norwegian waters, the fire is mainly caused by dinoflagellates from the genera Noctiluca , Gonyaulax and Ceratium .

The term is derived from Norse mǫrueldr , [1] a compound word of marr “sea” and eldr “fire”. It is closely related to English (especially Shetland dialect ) mareel , Icelandic maurildi , Swedish mareld and Finnish merituli .

Article is paywalled for me so didn’t read it but I have seen this one time.

I can’t recall the where or when except I was C/M on a car ship, don’t remember even what ocean were were in.

What I do recall is it was early on the 4x8 watch, a clear, dark night, no moon, the weather was hot, humid and no wind.

Early in the watch I went out on the wing for a look see and I noticed relatively intense phosphorescence in the bow wave and along the side of the hull. Enough that I mentioned it to the AB and he went out for a look too.

Came back inside and a little while later it was if someone was slowly turning up a rheostat, the entire sea, as far as could be seen, starting glowing green.

Very strange and disorienting sight. Never saw it before or since.

Your reply shows that you did not actually read the article. You are referring to the common form of phosphorescence. Almost all of us who have spent any time at sea are familiar with the “stir the water” kind. The article describes something totally different.

You have seen it then. That’s exactly how the article described the phenomena. It could be seen by satellite covering a large area of the ocean.

I have seen many spectacular phosphorescence events, including one off the coast of South America where the ocean was full of huge balls of baitfish that looked like full size hot air balloons. They would light up when larger fish attacked the ball or when our tug got too close, then turn off again.

But I never saw anything like what was in the article.

I’ve seen several spectacular displays. Only one that comes close to what the article is about was a trip across the Gulf to Quatzi. It was flat calm and new moon dark. The water wasn’t bright but more visible than usual. Hard to describe but eerie looking. Flying fish, fish schools and dolphins made their presence known.
Another was a trip from Riohacha to Santa Marta The only brilliance was the dolphin trails and fish balls as you described.
Back in '76, I was on a seismic vessel for Mobil. We were experimenting with some of the first pneumatic long gun arrays. 40 air guns strung out behind us made spectacular flashes one night when the phosphorescence was high. Wish I had the means to video back then.

I never thought there was any point in telling anyone because I figured who would believe it? In fact it didn’t even seem believable to me at the time.

For thousands of years, sailors have told of nighttime seas that mysteriously glowed a milky white or luminescent blue, stretching out to the horizon. Referred to as a “milky sea,” the tales date back at least to Greece and Roman … Continue reading →