Or at least the Low Level Alarm set to allow realistic roll and resulting sloshing in the tanks/sump. What is the use of an alarm set for operation in calm waters only?

Are we sure they have off engine electric pumps?

I thought that originally from an article earlier in the thread. Looks like my original assumption of off engine LO pumps is incorrect.

From the manual that was linked:

The main lube oil service pump is mounted on the free end of the engine and
is driven by means of the crankshaft through a gear.

The GenSet is as standard equipped with an electrically driven pump for prelubrication before starting and also for postlubrication when the engine is
stopped… The voltage for automatic control must be supplied from the emergency switchboard in order to secure post- and prelubrication in case of a critical situation.

The manual also has a blurb about an electric cylinder lubricator. Something I haven’t seen on a trunk type engine.

Also from the manual:

A monitored engine start (without monitoring of lube oil pressure) within one
hour after stop of an engine that has been faultless in operation or of an
engine in stand-by mode.
This kind of engine start has to be triggered by an external signal “Black
Start” and may only be used in exceptional cases.

Manual start of the engine at emergency start valve at the engine (if applied),
without supervision by the SaCoS engine control. These engine starts will be
applied only in emergency cases, in which the customer accepts, that the
engine might be harmed.

All 4 on the bus PMS has no backup engine. Probably wouldn’t want them to try and auto start if you were getting low LO pressure alarms.

Whether the power was sufficient to supply only hotel load, or also essential equipment is not known,

One would expect the E-Bus to supply stuff that was critical for blackout recovery and other emergencies.

I was responding to @Tupsis as to why the assumption that the problem was something complex. In my experience at least a recovery from low lube oil pressure is quick and more generally the assumption is that simple problems can be solved quickly.

In this case a better rule can be made by paraphrasing Clausewitz:

Everything is very simple at sea, but the simplest thing is difficult. These difficulties accumulate and produce a friction, which no man can imagine exactly who has not been to sea.

Is it known to what values the low and high lube oil alarm levels were set? Under for a ship ‘normal’ circumstances, including stormy weather that is, with a rolling, yawing and pitching ship and with no list, oil sump levels should not be a concern. What happened is weird in my humble opinion.

What I think is weird is the assumption that a cruise ship can “handle” bad weather and then being surprised when rough sea and high winds cause a previously unknown latent error to manifest itself.

Almost as bad is when stuff happens and the passengers are somehow surprised that going to sea, even on vacation, poses an element of risk.

Someone recorded a bunch of VHF audio from the incident. Worth a look, but sadly only for the Norwegianally inclined: 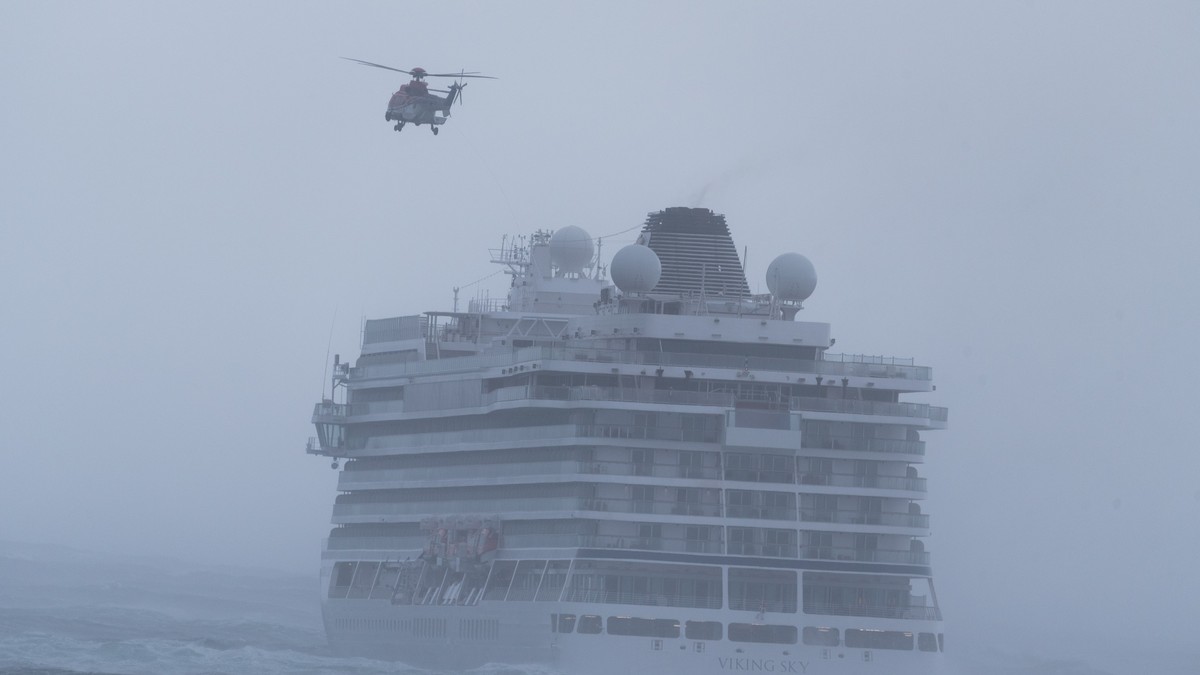 sadly only for the Norwegianally inclined:

You mean you have something better to do than transcribe it for us?

I do understand Norwegian and, although it is difficult to hear, what is most impressive is the calm voice of the Pilot. I agree full with this statement:

Impressed by the calm of the communication

Operational inspector Andreas Bull at the Main Rescue Center in Southern Norway has heard parts of the sound recording, and is impressed by how calm the communication is.

- Isn’t it really easy to get stressed out in such a situation?

- I suppose this is people who have been out for a winter night before. I want to believe that they are experienced who are able to communicate as calmly as this, he says.

Of course the Pilot is “Nordlending” (From Northern Norway). They are known to be pragmatic and used to handle rough weather.

You mean you have something better to do than transcribe it for us?

The transcript by NRK translate pretty well i G.T.

Automation in particular creates greater distance between people and the world around them, making them more isolated from it, and less able to notice or take effective action if things go wrong. People can be lulled into a false sense of security by confusing the reliability of technology with its robustness in dealing with novel or unexpected developments.

Perceived value
• The more a course of action appears to support a goal that we regard as important or highly desirable, the less risky it will appear to be (or the more we will overlook the risk normally associated with it)

Perceived familiarity
• The more a circumstance or action seems familiar, the less risky it will appear to be.

So the question is; how do we reconcile this?
I can see two options:

I’m afraid the trend is pointing towards the last, no matter how we old timers feel about it.

Hmmm.
A few years ago. Before all the modern hi tec BS.
One of the basic fundamentals of rules for a Marine Engineer.

Keep the plant running, contact the bridge, before shutting down.
Why, no point saving the engine if in doing so you loose the ship?

Why would the Bridge say no? It would be highly unusual to say no. Even when not saying no? The Bridge still requires warning.

Modern engines with auto shut down by passing this step is in my opinion not a good thing.
Which is why on any ships bridge with this type of engine. There is an alarm system readout. Emergency shut downs and emergency overrides.
The ship deck officers should know What they are, what they mean and how to use them.
Typically there are some auto shut downs which can be overridden and some which can’t be overridden.

When safe to do so shut the plant down. It’s vital to overall ship safety not to shut down until the ship is safe.

Those of course might lead to catastrophic failure. Rather than just engine damage.
Although oil mist might occur after running with loss of lube oil for some time.
Once upon a time long ago oil mist detector response was slow down to DS. Keep running so lube oil kept flowing and cooling continued.

This ship was almost lost due to an auto shut down feature which could and should have been overridden. By an engineer in consultation with the bridge or in extremes by the bridge.

It may be the trend.
This incident. Show why the trend may be a hazard. Should wake the authorities up and be a reminder why the human engineer on watch exists.

Automation or not I was thinking more in terms of plain old ordinary safety margins. If the ship is said to be able to handle 8 meters seas then set the operational limit to 6 meters. Not always possible but the ship will spend less time in heavy seas which is risk factor.

I wrote this nine years ago but it applies here as well:

Lesson learned - avoid heavy weather. Hidden flaws, the so-called latent condition… are more likely to reveal themselves when the ship is being tossed about in bad weather, just when you can least afford to cope with it.

It is not only the vessel that encounters heavy weather, it is the vessel, crew and cargo. Operating vessels and their crews near limits increases risks and chances of failure, - but the path of failure may not be the one expected.

Doesn’t most ships today have UMS/E0 Class?? (= unmanned engine room for extended periods)
This applies to ships with automation to operate in UMS/E0 mode during normal at sea or manoeuvring conditions. Max duration is 18 hrs. (LRS/ABS) or 24 hrs. (DNV-GL)
This is subject to a lot of preparations, rules and regulations:
http://www.machineryspaces.com/unmanned-machinery-spaces.html

I believe it is possible for the Engine crew to leave the ERC on Friday afternoon, Duty Eng. make a round to repeat the checklist on Saturday and Sunday, which reset the time to Monday morning. (??)

It’s been a while since I’ve been on a UMS ship.
Back in my day. They were not UMS all the time and certainly not in pilotage waters. UMS over night when Full Away usualy with a designated nite on duty engineer. Who would conduct a set of rounds and do a log around midnight.
The Alarm would sound in public crew areas of the ship and the duty engineers cabin.
Required to be answered within I can’t rember how many minutes or the Engineers alarm would sound calling all engineers to the ER.
Things may have changed.
I doubt very many passenger ships run UMS and even those only well of shore.
I would be very surprised if this vessel was running UMS.

Although some European vessels have the ECR on the upper deck. For some strange reason.

On the subject of calm communications from engine room to bridge.

About 03:00 we got a call from downstairs asking we reduce to 2/3 speed. “We have a slight problem”.

After about an hour and no communication at all I asked the OOW if I should perhaps wander downstairs and speak to the Chief Engineer. The OOW agreed so I strolled downstairs and was greeted by all the engine room crew (both on watch and supposedly off) with faces as long as your arm but doing nothing apart from looknig glum… One of the main engines was stopped. The Chief pointed to the stopped engine and told me to look along the inboard side…

There was a con rod sticking out the side of the entablature!

Although some European vessels have the ECR on the upper deck. For some strange reason.

The strange reason is that it is easier to escape from the ECR if it is above deck. (Refr. Bourbon Dolphin) Besides, you cannot see or hear anything better from an enclosed and air-conditioned ECR by it being within the E/R. Access from the ECR to the E/R from above deck is via direct staircase.

I doubt very many passenger ships run UMS and even those only well off shore.
I would be very surprised if this vessel was running UMS.

The V.S. has UMS class but I agree, she is unlikely to have had unmanned ECR during this incident, especially since she was on a coastal passage in bad weather and it was middle of day.

PS> She also had class notation “Safe Return to Port” (SRtP), which should make a total stoppage of main power supply near impossible. I would think that there will be a review of the requirement to obtain that notation after this. 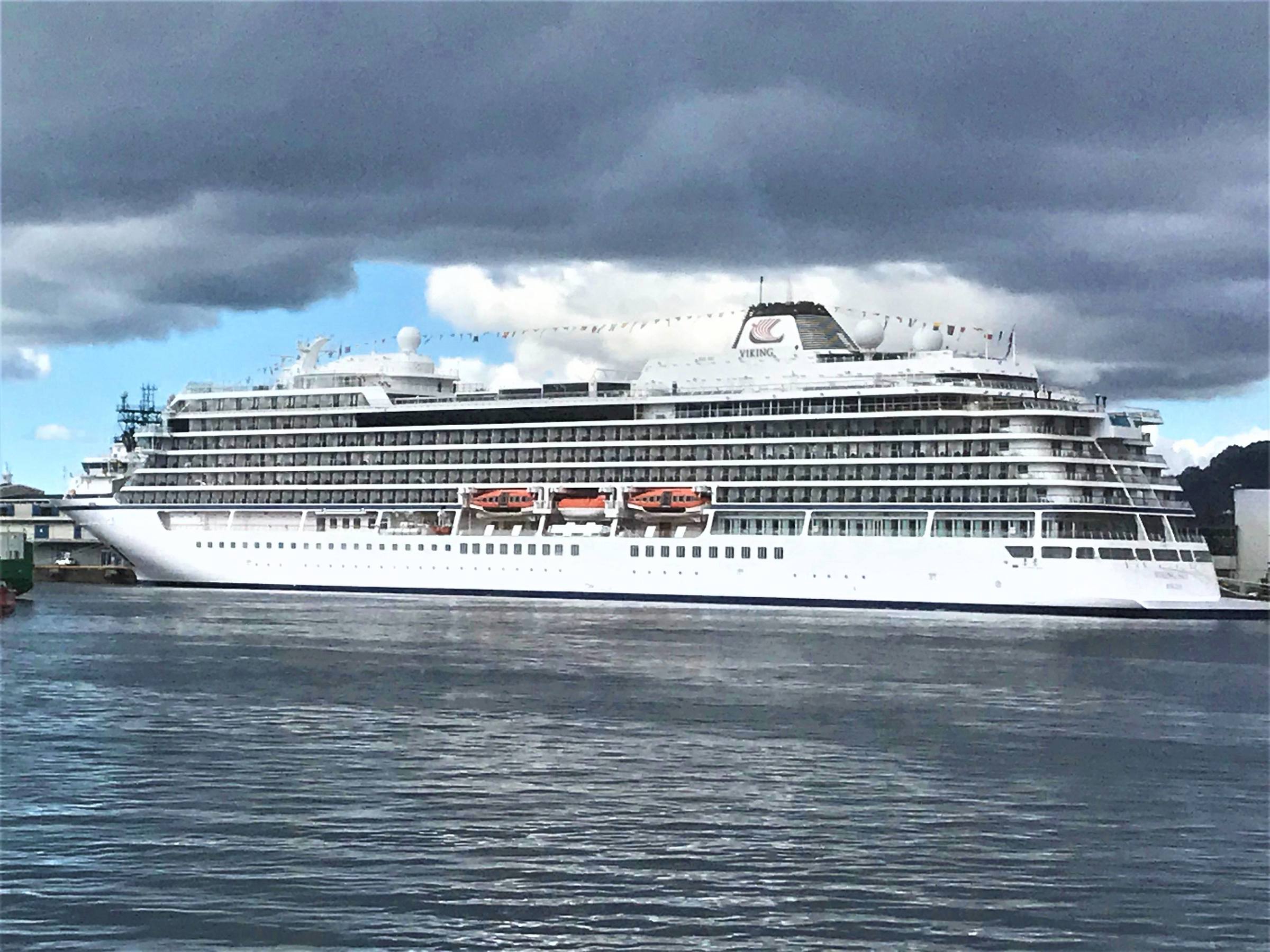