do any cruise ships have proper helidecks so the choppers can actually land?

I suppose that if they had one that it would be impossible to safely land in stormy weather on a helicopter deck of a pitching and rolling ship. Winching under these circumstances is the only practical method.

No helideck, or even suitable landing areas. Some cruise ships (as well as other vessels) have dedicated winching areas, sometime marked with a circle and “winching only”. I have not seen any in the overhead shots of this vessel. In any case, the pilot and rescue swimmer picked the winching zone based on the conditions at the time. They did try to use two choppers simultaneously, but found that too risky.

They had all the luck of the world that the anchor kept the ship off the rocks and so prevented a disaster that was about to develop.

That is fact. This could have been a real catastrophe if they hadn’t held, or if they didn’t manage to get one engine going to help ease the strain on the chains fairly quickly.

I suppose that if they had one that it would be impossible to safely land in stormy weather on a helicopter deck of a pitching and rolling ship.

These pilots are used to land and take off from heaving/rolling helidecks and in higher wind speed than here as a matter of routine, but that is on rigs and vessels with trained HLOs etc.

In the Statfjord field they shuttled personnel between the Floatel and platform for shift change, using 3 choppers in round robin in 60 kts and more. At 70 kts. the danger of people being blown off the helideck ( !50 m. elev.) on Statfjord B got too great. The Pilots had no problems continuing. They landed to refuel and returned to shore.

This ship has azipods.

“The Promas system incorporates the propeller and the rudder in a single unit to increase the hydrodynamic efficiency.”

Very fancy way to describe them

Thanks for your info.

Hoping for a well educated engineering response. Your comment shines a lot of light. The El Faro suffered a catastrophic end when she lost lube oil pressure due to angle of heel in a hurricane. She’s a steam ship, I know. But her propulsion motor has the same lube oil needs (in concept). Now we have a ship built just two years ago and the ‘public statement’ from an authority is low lube oil related problems again. WTF??

So my thought is, was this ship in such dramatically rough weather, ALL her engines failed for the same reason at the same time? Why doesn’t the engineer on watch, if feeling the ship’s dramatic movement, load more lube oil in an effort to circumvent the sensors from ‘thinking’ the oil is lower than it actually is?? I can understand too high oil pressure, but that wouldn’t be a issue (would it?) if the sensors and computer technology is telling the guys on watch “is too low” or is that an oversimplification?

I can’t comprehend that this is the real reason, given the well publicized causation after the El Faro event. Or did everyone just thro their hands up in the air and not care???

This ship has azipods

Hmm. My impression of the promas system is that it is a traditional shafted propeller but instead of a fairwater cone on the end it has a cylindrical cap that has a concave dimple on its end that matches up to a bullet shaped protrusion on the leading edge of the rudder. Thus when the rudder is moved there is a smooth transition between the two. Creating greater lift by the rudder, more effective rudder performance, possibly more efficiency at speed as well?

That is fact. This could have been a real catastrophe if they hadn’t held, or if they didn’t manage to get one engine going to help ease the strain on the chains fairly quickly. 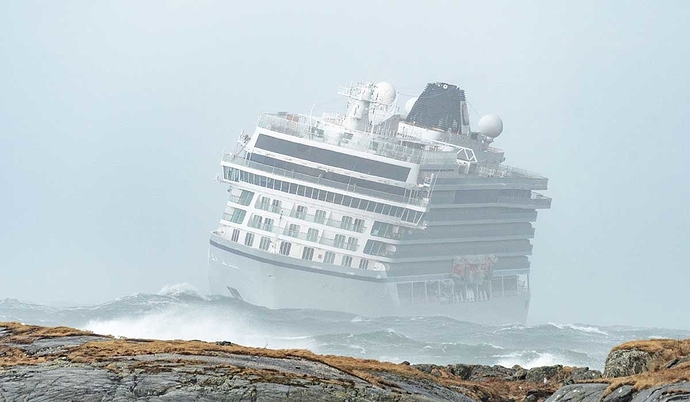 Probably anchored now as the wind is coming in from the front. I don’t suppose this picture was photoshopped? It looks unreal.

Not sure but it looks like the wind is blowing from left to right in both photos. In the next to last photo from the direction of the spray coming off the seas.

Yes, I suppose that with that large sail a storm wind can play tricks with the heading. Also the wind direction is not entirely steady all the time.

Watching this live on TV at the time she did turn a lot while the anchors were down, but behaved more steady once they got power on one engine restored and could help by using one propeller and rudder, as can be seen on the early overhead pictures from the helicopters: 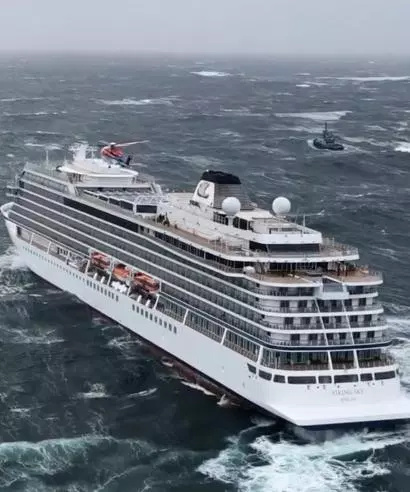 My guess is in this situation using the engine just to keep the head in the wind would be sufficent to reduce the strain on the ground tackle. One risk on a rocky bottom is breaking a fluke.

The conditions on board the two small vessels that was first on the scene and stayed until the end must have been horrendous.
Here the tug Vivax: 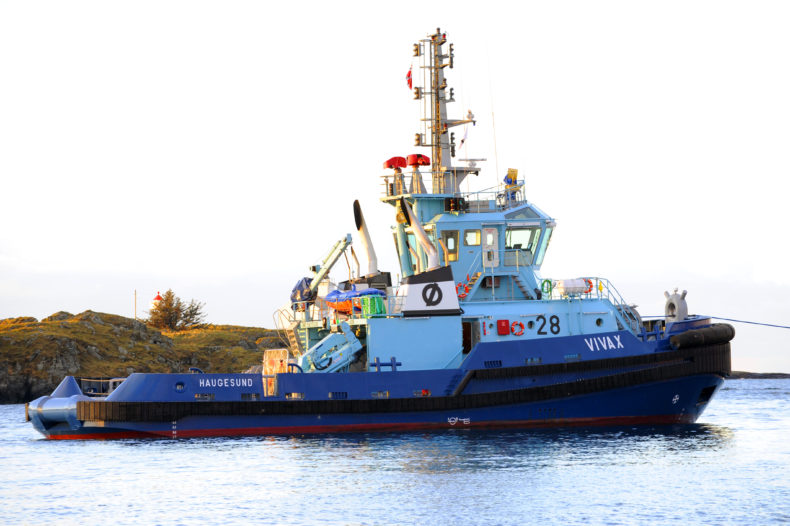 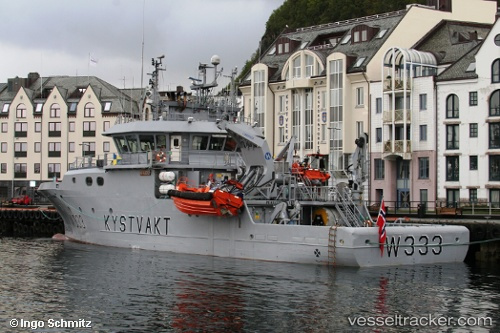 The Njord sustained minor damages due to being hit by a freak wave during the operation.

The Accident Investigation Board Norway closed its surveys on board the cruise ship “Viking Sky” on Friday. - We will now put together the information we have and see if there is anything that is missing, says Dag Sverre Liseth, department manager for shipping.

The cruise ship «Viking Sky» will probably leave Kristiansund tomorrow. According to the Pilot order, the ship will depart from Vestbase at 1430 hrs. The shipping company has previously said that they hope to get the ship back in service during April.

Nothing about their destination yet.

So my thought is, was this ship in such dramatically rough weather, ALL her engines failed for the same reason at the same time?

I can’t comprehend that this is the real reason, given the well publicized causation after the El Faro event. Or did everyone just thro their hands up in the air and not care???

As unsatisfying as it may be, I seem to be in same position as “still need more information”.

The project guide (application manual) for this engine (CR Tier III) is 470 pages long. It is heavy on the use as a geared drive application and light on the genset application AND there is a similar guide for the non-common rail system (Tier II, 272 pages) that speaks more to the engines use as a genset. Unfortunately they conflict a bit as to whether the engine is operating as a dry sump or wet sump. I’m assuming for now that it is more like a wet sump (as the Tier II guide shows) assuming again it was purchased as a “skid” with engine and generator mounted on a common foundation and the description below applies: (bold face added).

Regardless, the pump is never supposed to draw in air. If the sump is “built-in” so to speak the arrangement of pump suction in a well and location of alarms is more directly controlled by the engine builder whereas a dry sump would require the ship builder to build the “service tank” (as MAN calls it) including a pump suction well, suction piping, strainer, low level alarms , vents etc. More room for an issue to come up later.

Just as info, the manual shows it should be covered up to 7.5 degrees in dynamic pitching and to consider trim and list conditions (22.5 deg dynamic) could be simultaneous.

So really at this point I just have more questions.

Hoping they have looked into and will report on some of this as opposed to “oil level was too low”. I hope NTSB issues a report as well since they went to observe the proceedings.

This is all theory. It all depends on the prevailing conditions during an emergency such as the weather and sea condition, in case of flooding the list of the ship which could prevent life boats from being lowered, fire, black outs and not to forget panic. It is probably for this reason that the cruise lines advocate ‘the ship is your best lifeboat’ theory. 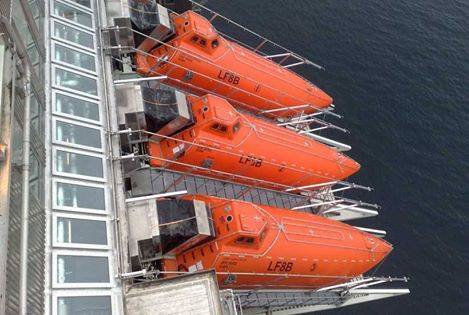 Nothing about their destination yet.

All scheduled sailings for the Viking Sky will be operating as planned from April 6.

So that I would think this is Copenhagen to Amsterdam as per the itinerary. This cruise states it is sold out.

She needs to get underway on the afternoon of the 4th to make Copenhagen early on the 6th.

4 posts were split to a new topic: Anchored Vessels Behavior in Wind

Topic is the Viking Sky incident and it is suggested that there was a lubrication oil problem. All engines stopped, ship drifted, nobody died, etc. The proximate cause of the incident is still not known. Design fault that could not have been spotted by due diligence? Crew negligence? Heavy weather? Was the Master competent? Was the ship seaworthy for an inland trip Bodö/Stavanger? Nobody has so far been arrested or jailed. Had the Master drowned, it would have been easy to blame him for everything. When cruise ship M/S Costa Concordia contacted a rock January 2012 and almost sank, the Master was arrested at once. He was later sentenced to 16 years in jail for having killed passengers, etc. I consider him innocent. I look forward to the investigation of this incident. Maybe we can learn something.I am surprised that the ship can continue trading before the cause of incident has been clarified.

Thanks for that. Excellent clarification. Ive read a lot of conflicting comments since the event. I have NEVER seen this installation on such a ship, usually this kind of thing is “media worthy” and I have seen nothing. Especially since she is relatively new.

However, maybe this sheds some light on the accident overall. Since she drifted into such shallow waters, perhaps we start seeing the truth?? Was her rudder appendage subject to grounding at some point?? This might explain why power to three engines was restored, but she could not get underway on her own. Three of four gensets on this size ship is ample enough to get her propulsion on. It seems a bit more than just a ‘lube oil’ issue.