Always heard shit said about the operations of Oceanographia and how they cheated and chiseled their way through the industry in Mexico. Anyone know if OCLLC still owns part of them? MEXICO CITY, March 15 (Reuters) – Creditors to Oceanografia, a Mexican oil services company at the center of an alleged fraud that forced Citigroup to cut its 2013 profit, have seized a ship that was used as collateral for debt issued by the company.

Norsk Tillitsmann, the Oslo-based trustee for some of Oceanografia’s bonds, is preparing to sell the ship, OSA Goliath, to recoup funds for lenders, according to a letter published on Saturday on the trustee’s website.

The ship was seized on Friday in Aruban waters on Norsk Tillitsmann’s request, the letter said.

A spokesman for Oceanografia, whose main business was providing services for Mexico’s state oil company Pemex, did not immediately respond to a request for comment.

Citigroup said last month it uncovered at least $400 million in bogus loans to Oceanografia at its Mexican subsidiary, Banamex.

Oceanografia had borrowed from Banamex using expected payments from Pemex as collateral.

Mexico’s government has taken control of Oceanografia and begun a criminal investigation.

The FBI and the U.S. Securities and Exchange Commission are investigating the transactions, people familiar with the probes have said.

OCLLC as in Otto Candies? News to me. But then again so was the demise of the Twinky.

[QUOTE=txwooley;133128]OCLLC as in Otto Candies? News to me. But then again so was the demise of the Twinky.[/QUOTE]

My understanding when I worked for them was that OCLLC was a major shareholding investor in Oceanografia which is why the Candies IMR vessels are near sisters to the Oceanografia IMR boats. They are all DeHoop designs from Holland.

pretty suspicious in my book but then again someone here must know the real story and I am all ears.

One of their contracted vessels, the Sampson was at the docks in Pensacola and is now anchored up in the offshore anchorage. 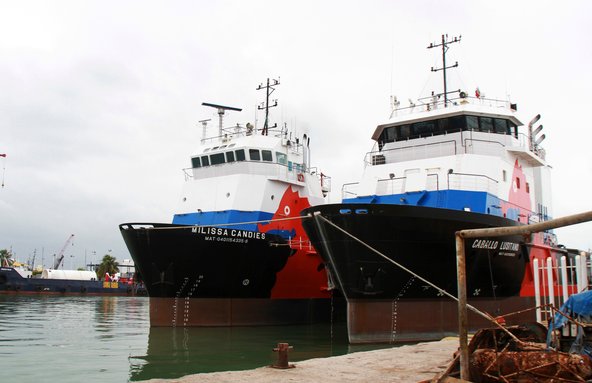 For some top Citigroup executives, it was a kind of little black book: an informal tally of Mexican companies that they feared could imperil the bank’s “crown jewel” — a sprawling retail lender called Banamex.

Using that list, which one top executive referred to as the “book of redlined clients,” the bank severed ties to multiple companies in Mexico in the financial crisis year of 2008, part of a broad scrubbing of risk throughout Citigroup, former executives said.

But a $400 million fraud at its Banamex unit that was discovered last month highlights the limitations of that kind of culling, and more broadly points to the challenges of finding solid lending clients in a country where the line between big business and political cronyism can become blurred.

The loss is also drawing attention to the longtime leadership of Citigroup’s Mexico chairman, Manuel Medina-Mora, 62, a star at the bank, where he is known for his dapper suits and corner-office polish.

Citigroup officials have largely blamed recent problems at Banamex on a combination of bad luck and bad actors. But a closer look at Banamex’s lending business reveals potentially more systemic challenges: The bank has been placing large bets on a few risky corporate borrowers.

The $400 million fraud involving an oil services company, Oceanografía, for example, erased 19 percent of the Banamex banking unit’s profits last year, according to one analyst’s estimate. Oceanografía, which is known in Mexico and in the corporate bond market for its checkered financial history, is one of Banamex’s 10 largest corporate clients, a person briefed on the matter said.

The bank’s problems, though, go beyond the troubled Oceanografía loans. Banamex officials were also caught short last year after roughly $300 million in loans to a handful of Mexican home builders suddenly soured. The loans, according to Moody’s Investor Services, amounted to about 3 percent of Banamex’s Tier One capital, a metric that regulators watch to determine a bank’s financial health. Many of the home builders’ assets are likely to have been “wiped out,” a lawyer for one of the troubled developers said. Citigroup officials say that they have built reserves to cushion any ensuing losses, noting that Banamex remains well capitalized.

The Mexican home builder setback, in which other banks also suffered losses, illustrates one of the peculiar challenges of doing business in emerging markets, where investments are often tied to decisions by government leaders. The problems for the Mexican builders, for example, began after a policy shift effectively killed the developers’ suburban projects, threatening their ability to pay back the loans.

Through his long career as one of Mexico’s top bankers, Mr. Medina-Mora has proved adept at navigating the political challenges, according to his former and current associates.

But the bank he built has been considered something of a “black box” — a highly profitable but not especially transparent unit that was run with great autonomy by its leader, according to current and former bank executives. Sometimes, though, that autonomy rankled other executives in New York, the people said.

Ever since Citigroup acquired Banamex in 2001, Mr. Medina-Mora made it clear that “I will take care of Mexico,” said one of the former executives who, like the other current and former executives interviewed for this article, declined to be identified.

“We dispute assertions that the management team is autonomous,” a bank spokesman said in a statement. “While Banamex is a subsidiary of Citigroup, it is absolutely subject to the same risk, control, anti-money laundering and technology standards and oversight which are required throughout the company.”

The relationship has worked well for more than a decade for Banamex, Citigroup and Mr. Medina-Mora personally. Mr. Medina-Mora has climbed to the top of Citigroup’s ranks: He was named the bank’s co-president last year. Yet with each new set of responsibilities he assumes at Citigroup — head of Latin America, head of consumer banking for North America, head of consumer banking worldwide — Mr. Medina-Mora has always retained a leadership role at the Mexican banking unit, raising questions about whether he is stretched too thin.

Serious concerns about oversight at the Mexican unit have rarely surfaced, at least in part because a fairly stable national economy has helped Banamex generate strong returns. In fact, Banamex has better returns than Citigroup as a whole, with a 2 percent return on assets, compared with about 1 percent at Citi, according to Michael Mayo, an analyst with CLSA.

But lending to corporations is not a big growth area for Banamex or other banks. Corporate lending has been growing at a far slower pace than consumer loans, according to analysts.

More fundamentally, there are a limited number of borrowers that the banks deem creditworthy in Mexico, and many of those companies do business with the government.

“It is a reflection of the oligopoly we have in the Mexican economy,” said David Olivares Villagomez, a senior credit officer at Moody’s in Mexico City.

The 2008 efforts by Citigroup executives to reduce risk among corporate clients in Mexico led to a further consolidation of Banamex’s lending book, according to several former executives with knowledge of the matter.

As the book of so-called redlined clients filled up, there were fewer clients to whom Banamex was willing to lend, the former executives said.

That may help explain why Banamex had such a large exposure to a single oil services company, Oceanografía. But it does not explain how the bank ended up extending $585 million in short-term credit to a company that had warned its own bond investors that it was “from time to time subject to various accusations, including accusations of corrupt practices.”

Oceanografía has long been the subject of speculation in Mexico over its quick rise after 2002, which some suspected was a result of ties to high-ranking Mexican officials. These connections, however, have never been proved. Since then, the company has won multiple contracts to become an important supplier of marine engineering services to Mexico’s state oil monopoly, Pemex.

Oceanografía’s fortunes, however, changed sharply last month after it became the subject of a new government review that resulted in a suspension of government contracts to Oceanografía for the next 20 months. Banamex had advanced as much $585 million to Oceanografía through an accounts receivable program.

The program was supposed to work like this: Banamex would advance money to Oceanografía to provide services to Pemex. The oil giant would then pay back Banamex, verifying invoices provided by Oceanografía to confirm that the work had been completed. In theory, Banamex was relying on Pemex’s ability to pay back the bank.

The bank said Tuesday in a statement: “While we continue to investigate what took place in Mexico, we are working to identify any areas where we need to strengthen our controls through stronger oversight or improved processes.”

The fallout from a fraud scandal involving a small Mexican oil services company is threatening to undo one of the most important things Mexico has attempted in decades: reforming the energy business.

The story of corruption at Oceanografia, a contractor for Mexico’s state oil giant Pemex, is not out of character in a billion-dollar industry such as energy, especially one accustomed to little oversight and treated as a national treasure, as it is in Mexico.

Oceanografia allegedly created as much as $400 million of phony bills for work it had not yet done and used those receipts to borrow money from Citibank’s Mexican subsidiary, which was left holding the bag of useless paper. The company apparently has a history of booking phantom work and using political connections to obtain juicy contracts (including possibly the son of a former Mexican president).

And that’s not all. Oceanografia has defaulted on debt, has a chief financial officer allegedly under investigation for laundering money, and a chief executive officer, Amado Yanez, who has become famous for tweeting about nothing important while the company faced a crisis.

The government seized control of Oceanografia, but the deeper the mess goes, the uglier it looks for Mexico’s political establishment. It all came to a head on Tuesday when lawmakers for the opposition National Action Party threatened to hold up opening Mexico’s energy business to private investment unless the government comes clean about how bad the case is. Robert Gil, a PAN lawmaker, displayed legislative brio when he said: “We can’t assure Mexico that the law regulations will be comprehensive if we don’t know what problem we need to solve: What happened with Oceanografia?”

Such concern is understandable. After all, several PAN politicians have been linked to Oceanografia’s dealings. Worse, Mexico’s attorney general’s office has admitted delays in the investigation because it cannot yet say who’s responsible for what in this scandal.

But holding up energy reform laws is reckless. Oceanografia’s crony business, no matter how bad, is arguably the legacy of an inward-looking oil industry that was isolated for too long. Prolonging a status quo that breeds corruption on the grounds of investigating corruption is no solution. Mexico’s leaders need to find a better response to energy industry graft. To put it another way: Oceanografia won’t be the only rodent to come out of a cupboard that has been closed for more than 70 years.

The Oceanografia case is a test of how serious Mexicans are about revamping their energy industry. Mexico’s Federal Audit Office didn’t have the power to sanction a private company like Oceanografia when it investigated its dealings in 2006. For its part, Pemex needs to clean up its act in how it hires, pays and evaluates the work of its suppliers. In other words, Mexico needs tough regulations and a willingness to root out corruption if it wants to revolutionize energy.

Without reforms, Citigroup’s troubles will become a red flag for investors and financiers eager to do business in Mexico. And the economic boom that many expect to come from Mexico’s oil business could lead nowhere. If Mexicans need to be told about the disappointment that follows when an energy boom goes bust, they can ask Brazil.