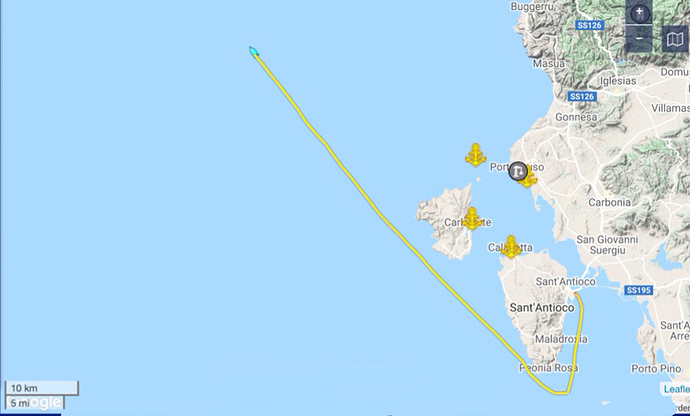 As you were! The utility vessel JIF Helios is returning to its home base Sete, France again. So far there are no recent progress reports about the status of the salvage of the CDRY Blue available.

Today, the Italian authorities declared the removal of all liquids from the ‘CDRY Blue’ as completed.

In a few days, the owner/insurer will ask tenders to decide who will remove the ship (or the wreck), and how she would be removed.

Then, the Italians must approve… an often-lengthy thing; nobody will be responsible if…

Not really, now, she is at 41.4°N / 6°E, far away from all terrestrial AIS-receivers (her antenna is not very high ASL); about halfway between Sant’Antioco and Sète.

On MarineTraffic, she is the only vessel on this route shown as ‘Tugs and Special Crafts by Satellite’.

Yes, that figures. The position at which the data stopped is about 45 nautical miles from land. Not a bad range for a rather low antenna location. She will reappear on AIS when nearing Sète. Of course it also depends on the local propagation conditions of radio waves. I remember that almost every time after we entered the Persian Gulf we could reach Kuwait on VHF from a distance of 100 miles, some times even more.

Often, offshore, you will receive vessels, up to many hundreds of miles away.
Indeed, they will not show up on your screen with a distance limit. However, the signal is present.

This should have to do with temporary reflections in the lower atmosphere.
Looking in text mode, arranged by distance, you will see them. This is not serious, maybe half an hour later, they will disappear, and others will show up.

6 posts were split to a new topic: Atmospheric Ducting

Today, the local newspaper has some ‘no-news’:
The monitoring of the ship for environmental problems continues, by the Italian Coast Guard AND by Smit Salvage.

Nothing about her future removal…

Today, the local newspaper writes:
Some 15 companies were invited, by the owner/insurer of the ‘CDRY Blue’, to submit proposals for the removal of the ship/wreck. Now, experts from these companies are inspecting the vessel and the rocky bottom.

Proposals are expected for mid-February.

It seems that they are in no hurry. Maybe waiting for the big storm to free it from the rocks…

Easier to remove the small pieces after Mother Nature does the grunt work.

Easier to remove the small pieces after Mother Nature does the grunt work.

The expression smashed to smithereens comes to mind…

My son was on the ship, there was no cargo. They dowloaded the coffee in Cagliari and headed to Alicante for another cargo of coffee.

Thank you for the info. I suppose that having no cargo on board makes it easier to salvage the ship. No mention was made so far by the authorities that the ship sailed in ballast. I hope that they were not lightly ballasted because that could be an explanation why they were thrown on the rocks by waves and wind.

Does your son know the progress of the salvage. It is very silent.

There was strictly no traffic around CDRY Blue on AIS in February. The local newspaper had no news.

Mid-February, they should receive the propositions from the salvagers, but they did not specifiy which year…

Hi, he still doesn’t know anything about the stage of the salvage work. The ship’s chief mechanic responsible for the recovery of the ship remained with the specialist team. My son was on duty in te engine room when they failed, around 9:15 pm. As can be seen in the filming of the coast guard, there is a large break in the starboard at the engine compartment, in the tunnel area.
The ship was empty they had unloaded coffee in Cagliari and although they had received the storm warning, the ship’s owner sent them for another coffee race from Alicante until the end of the year. From what I understood from my son, it was a mistake of piloting, although in the press it was written that the ship failed due to the storm. Now the crew (non patents Romanians) are fighting with the shipowner to receive their wages, and insurance money.

Dan, is this your son Vlad? >>>
https://www.castedduonline.it/vlad-marinaio-santantioco/

His words by GoogleTranslate >>>
“Thanks to the coastal authorities, the army and everyone involved who managed to make the effort to save all the crew members.” Thanks on Facebook are from Vlad Cumpanasu, from Romania, one of the members of Cdry Blue, the ship stranded on the coast of Sant’Antioco.

“It all started like a normal day in weather conditions,” he says, “nothing unusual, but since we all know all the accidents happen at night and during the storm, we were in the control room and checking the clinometer. In an instant the needle started dancing from one maximum to the other. Then the smell of smoke and salt water mixed with the fuel was released and then screams them on contact with the rocks. I remember the alarms, the waves that hit the ship all night and the frightened colleagues. "

Yes, he is my son. After being rescued from the ship by the Coast Guard helicopter he wrote a post on the facebook, which was taken over by the Italian press. He is a student in the last year at the naval academy and was on a cadet trip.

‘Cdry Blue’ is still on the rocks; more heavy storms and bad seas passed by.
End of February, they received 15 proposals to remove the vessel. They are still examining.

For now, the corona virus has quasi shut down Italy and they have other urgencies.

Update (from the local newspaper of today):

Every day, the Coast Guard looks at the vessel for dangerous substances in the water.
That’s all!

The proposals for the removal, as ship or as wreck, are lost in the corona shutdown, no news.
No bad weather forecasted…