Captain gets four years in prison over fatal BC Ferry sinking 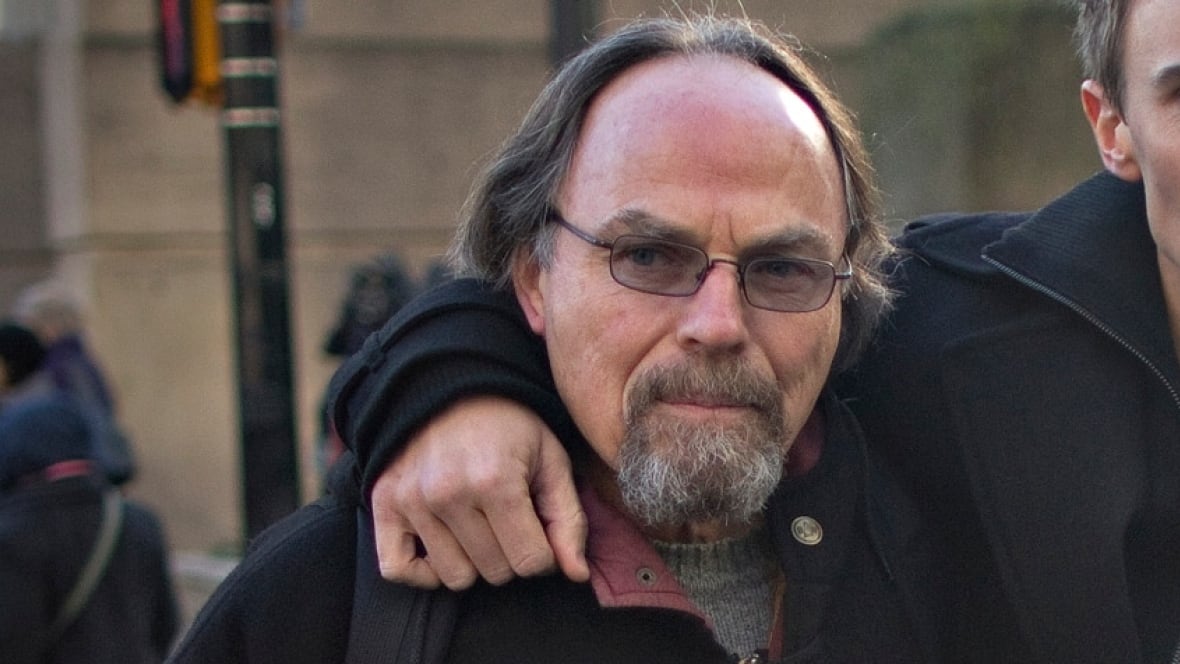 The former navigator of the Queen of the North ferry is out on bail, free again after having been sentenced to four years in prison for his role in the deadly sinking.

The former navigator of the Queen of the North ferry is out on bail, free again after he was sentenced Monday morning to four years in prison for his role in the deadly sinking.

Karl Lilgert’s defense lawyer filed an appeal at 3 p.m. Monday, just hours after a sheriff took Lilgert into custody, leading him out of his sentencing hearing in Vancouver.

Defense lawyer Glen Orris indicated at the time of Lilgert’s conviction that he would launch an appeal. Orris claimed that the judge failed to properly instruct the jury about the elements needed to prove criminal negligence causing death.

At 3:40 p.m., with $10,000 in bail being processed, Lilgert was spotted running down Hornby Street with television camera crews in pursuit.

More than seven years ago, in March 2006, the Queen of The North went down after striking land at Gil Island, off B.C.'s central coast. Two passengers never made it off the ferry.

Lilgert was convicted last month of two counts of criminal negligence for causing the deaths of Gerald Foisy and Shirley Rosette.

In B.C. Supreme Court in Vancouver on Monday, Judge Sunni Stromberg-Stein handed Lilgert the four-year-sentence, and also a 10-year ban on operating vessels.

In delivering the sentence, Stromberg-Stein said the “egregious” nature of the crime called for a strong sentence, as it was not an accident or lapse in judgment.

During the course of the trial, the court heard Lilgert was distracted, possibly by the presence of his former lover, quartermaster Karen Briker, who was the only other person on the bridge with him.

Lilgert testified in his own defense, telling the jury he was busy navigating the ship and ordering course changes as he was challenged with rough weather and unreliable equipment.

But Stromberg-Stein said it’s clear Lilgert’s relationship with Briker was a factor in the sinking.

[QUOTE=Steamer;113296]How about changing the title of the thread … the captain did not “get four years in prison …”[/QUOTE]

The cretin still deserves 10 years at least for such dereliction and pathetic excuse making. How utterly UNPROFESSIONAL of him!

I want the truth of what was really happening up on the bridge, I can’t seem to figure out why a straight answer was yet to be given!

[QUOTE=rshrew;113319]I want the truth of what was really happening up on the bridge, I can’t seem to figure out why a straight answer was yet to be given![/QUOTE]

That is most indeed true sir! Something very unmentionable was taking place up there for the mate to run smack straight into the island like he did! 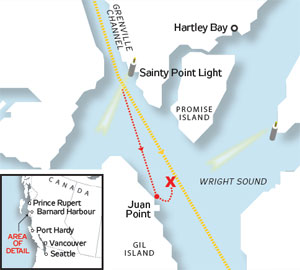 The yellow dotted line indicates the 1.3-mile course correction the Queen of the North
usually took when entering Wright Sound to avoid Gil Island. The red dashed line shows its actual
course when it struck Gil Rock off Juan Point and sank. (Map by Superfuture)

it’s an awfully long time from the point where the turn “should” have been made…what on earth were they doing up there?

AH FUCK IT! I’m just going to post the obvious conclusions of us Inside Passage experienced mariners that have been ongoing ever since that fateful night. I know it is what we all are thinking anyway.

[B]Navigator was either fighting or having sex with former lover on bridge of B.C. ferry the night it sank, Crown tells court[/B]

VANCOUVER — Karl Lilgert was either having sex or a heated argument with his former lover on the bridge of a B.C. ferry the night it hit an island and sank, the prosecution alleged at the man’s criminal negligence causing death trial.

During the final day of testimony — which has spanned three months and involved numerous witnesses, experts, calculations and maps — Crown lawyer Michel Huot finally delivered the accusation the court had been waiting to hear.

Huot accused Lilgert of fabricating his evidence, saying he was distracted from his navigation duties by his former lover — the only other person on the bridge when the Queen of the North crashed, setting off an evacuation where it’s believed two passengers were left behind.

But Lilgert insisted under repeated questioning that he was paying attention and that he made course alterations to avoid Gil Island in March 2006.

The trial has already heard that Lilgert and Karen Briker had been working alone together for the first time since they broke off their relationship.

“The relationship the two of you shared,” Huot began, “the attraction was powerful enough that whether it was sexual activity or an argument or a discussion coming out of the breakup of the relationship, that’s what occupied your attention that night, not navigating the vessel.”

Huot earlier suggested that Lilgert knew Briker would be on the bridge that night so he cut his break short and relieved Second Officer Kevin Hilton early so he could be with Briker on the bridge.

“And when you got to the bridge, whatever happened between you, whether it was sexual, an argument, a heated discussion, you just weren’t paying attention to navigating the vessel,” Huot said.

“I’m suggesting that I was navigating and paying attention to the best of my ability,” Lilgert responded.

The crash set off a frantic night-time rescue where boats from the nearby community of Hartley Bay and a coast guard vessel helped save 99 people from the Queen of the North. But there were 101 people aboard and Gerald Foisy and his common-law spouse Shirley Rosette haven’t been seen since.

Lilgert told his trial earlier that he made two course alterations. The first came three minutes after Sainty Point at the end of Grenville Channel — a key course change necessary to avoid Gil Island, while the second alteration was made to adjust for the effect the wind was having on the vessel’s course, he said.

Lilgert testified that he decided not to alter course at Sainty Point like normal but chose to delay for three minutes because a tugboat towing a log boom and another vessel — which the Crown has called “the phantom vessel” — were in the area.

Electronic navigation evidence already presented to the court shows the ferry did not alter course after exiting Grenville Channel and crashed into Gil Island.

“The vessel travelled in a straight line without an alteration from Sainty Point to … just before the island,” Huot pointed out to Lilgert.

Lilgert said he does not understand why the electronic data didn’t show the course alterations he said he made.

The Crown showed the jury maps that depicted the crash site and the route that the ferry would have travelled if no course alterations were made at Sainty Point.

The route lines up very closely with the point of impact, which the Crown said came from GPS data from an RCMP boat that attended the crash site.

“You hit this exact same impact point that you would have coming out of Sainty Point and never changed your course,” Huot said.

“Of all the places,” he continued, “that you could have hit all along the coast [of Gil Island] … you happen to hit the same spot, with all your manoeuvring, that you would have hit had you just never turned.”

Huot went on to suggest that Lilgert, whom the Crown has described as an experienced mariner with over 24,000 hours at sea and 6,000 hours as an officer, would never have made the decisions he said he did.

The court previously heard about the standing orders on vessels like the Queen of the North as well as collision guidelines in the Canada Shipping Act.

Those guidelines specify certain actions that a navigator like Lilgert should have taken in the situation he was in.

The inclement weather, the other ships in the area, the course alterations, the trouble Lilgert said he was having with the radar, each one of these issues, Huot suggested, should have compelled Lilgert to call either the ship’s Master or the Second Officer. But Lilgert said he did not.

Additionally, the court heard that the collision guidelines suggest reducing speed when travelling in low visibility, which Lilgert said he experienced that night.

The Crown showed the jury maps that depicted the crash site and the route that the ferry would have travelled if no course alterations were made at Sainty Point.
.
“I’m going to suggest to you that you have concocted virtually everything that you have testified about from Sainty Point until the point that you see the trees at the very least,” charged Huot. “It’s a fabrication.”

“I disagree with that,” Lilgert responded.

Lilgert’s defence team called one final witness Thursday who was a passenger aboard the Queen of the North.

The court learned that Edward Kennedy, who was travelling with his wife, saw what he thought was a “masthead light” of a ship travelling from East to West near Sainty Point.

Kennedy, who recounted many details of the night with precision, said he saw a light while he was standing on the deck waiting to board a lifeboat, but then the light disappeared.

Kennedy testified that he thought the light was travelling towards Grenville Channel — the same channel the Queen of the North had just sailed down. He said the vessel appeared to be travelling at a speed befitting a fishing boat, but not as slow as a tugboat.

The Crown did not cross-examine Kennedy and neither side called any more witnesses.

The jury has heard all the evidence for the trial.

Defence and Crown prosecutors will deliver their closing statements Tuesday and Wednesday.

Justice Sunni Stromberg-Stein said she expects to deliver her instructions on the law to the jury late next week or the week after, and then the case will be decided by the jury.

JUST PATHETIC! That scumsucking slug of a humanoid deserves more than 4 or 10 years even but LIFE WITHOUT PAROLE for what he did!

Who counts their sea time in hours? But I guess you sound much more crustier if you say you have “6,000 hours” of experience instead of “less than a year.”

[QUOTE=powerabout;113391]
the captains wife was in the jump seat…
Capt and FO got sacked ( forgot to open the throttle after rev thrust and wet runway) but in reality should have put the wife in prison to teach her a lesson
Plane was a write off[/QUOTE]

You really ought to spend more time researching the facts rather than posting this kind of bullshit. Here is a good place to start http://www.atsb.gov.au/publications/2009/behind-the-qf1-investigation.aspx after reading that, download the full report. You should have done that before posting garbage.

Look up the accident report and you will find that there were a lot of contributing factors, most of them focused on the airline’s training and procedures. The location or even existence of the captains wife is not even mentioned. As far as the accident is concerned, she could have been at home or shopping in Paris.

The aircraft was repaired and flew until March of 2012 when it was retired to storage in Arizona.

[QUOTE=Steamer;113420]You really ought to spend more time researching the facts rather than posting this kind of bullshit. Here is a good place to start http://www.atsb.gov.au/publications/2009/behind-the-qf1-investigation.aspx after reading that, download the full report. You should have done that before posting garbage.

Look up the accident report and you will find that there were a lot of contributing factors, most of them focused on the airline’s training and procedures. The location or even existence of the captains wife is not even mentioned. As far as the accident is concerned, she could have been at home or shopping in Paris.

The aircraft was repaired and flew until March of 2012 when it was retired to storage in Arizona.[/QUOTE]
Ha ha
first 400 to ever land in Bagnkok in the rain!!