Offical forecast looking about as good as it gets.

Local authorities in San Antonio reject salvor´s plan to throw some (a little) of the ship´s grain cargo overboard.

Apparently not having much luck getting the fuel off. Not a lot of other news in the local press, but this seems to be overplayed a little bit. 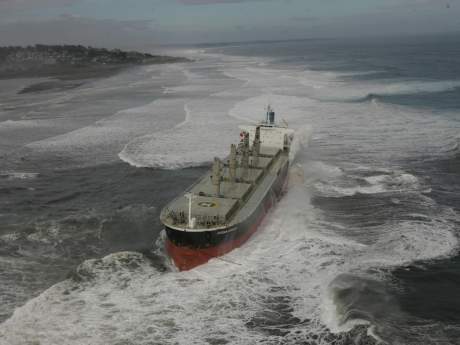 Weather is improving around here. Spring is well on the way.

Salvors attempt to remove 4000 t of grain by blowing it ashore through a flexible pipe, but having difficulty arranging it.

No oil removed yet. If was betting man, I’d bet they are simply trying to lighten enough to get ship off beach in one go.

Support barge enroute up the coast from Puerto Montt. 23 of ship’s crew were reportedly still in town.

Starting to get a bit warmer here. Kind of “mud season” in the bottom half of S. America.