That’s a good point. I knew something was missing but couldn’t think what it was.

On the GC run from Asia to the Panama Canal when off Southern Calif it was not uncommon to be able to pick up TV signals from the LA area. Like VHF and radar only ducting could explain getting a TV signal that far out.

With LORAN A the signals reflected off the ionosphere could be used but required a so-called skywave correction.

Yep, that was pretty common. It seemed like around 0400-0500 AST, we’d start hearing about how the cook needs more grits and whatnot.

Like VHF and radar only ducting could explain getting a TV signal that far out.

Most of the long distance skip in the old analog TV frequencies was due to sporadic E skip. When I lived in Santa Marta, Colombia back in '74, for about 6 months almost every evening, a couple of Florida TV stations would come in. They would last 1 to 3 hours, fading in and out.

Ducting mostly happens just before or after a front moves through. It’s more prevalent during spring and fall. It’s not uncommon for me to be fishing in Matagorda Bay Tx and hear Tampa Bay Pilots on the VHF.

Most of the long distance skip in the old analog TV frequencies was due to sporadic E skip. When I lived in Santa Marta, Colombia back in '74, for about 6 months almost every evening, a couple of Florida TV stations would come in. They would last 1 to 3 hours, fading in and out.

Ducting mostly happens just before or after a front moves through. It’s more prevalent during spring and fall. It’s not uncommon for me to be fishing in Matagorda Bay Tx and hear Tampa Bay Pilots on the VHF.

Yeah, I remember being a day or two out of Japan, eastbound and listening to a broadcast from Sacramento. 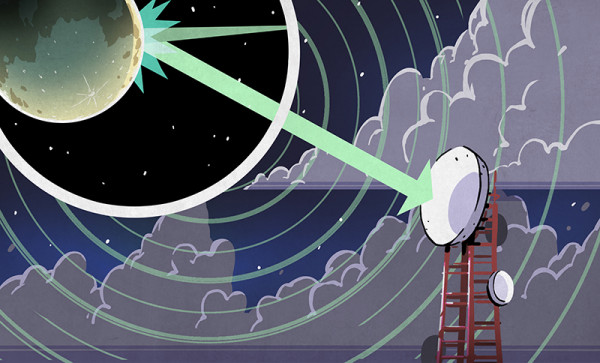 It has to be hard to be a kid interested in radio these days. When I was a kid, there was a lot of interesting things on shortwave. There wasn’t any cable TV (at least, not where I lived) so …

This is the discussion:

Another part of the ionosphere is the E layer and it is subject to having sporadic ionization. These ionized areas will reflect radio signals up to 1,400 miles. Sporadic ion clouds in the E layer are measured using ionosondes, and you can find maps showing where these ion clouds are.

E skip tends to come and go quickly, but can also be very strong. Sporadic E skip is thought to be responsible for the 1939 reception of an early Italian TV transmitter in England, for example. In 1957, a high-band (channel 7 to 13) signal was received via E skip in Arkansas. The transmitter was 2,300 miles away in Venezuela.

Normally, TV signals don’t bounce off the atmosphere because the MUF is too low, but certain weather conditions (temperature, density, and humidity) will cause the troposphere (the lowest layer of the atmosphere) to refract it. When a temperature inversion occurs (warm air over cool air), the troposphere can form a duct that can transport signals over a thousand miles.

Ducts have a tendency to form between the same two points and in some parts of the world, they will last for months at a time. Viewers often get accustomed to watching distance stations.

MUF (maximum usable frequency) as an indication of how dense the ionosphere is. TV signals have a pretty high frequency, so to get refraction in the F layer, the MUF must be very high.

The amateur radio sites have a huge amount of information and links to propogation software. Chasing long distance contacts (DX) is a major part of the hobby.

People may be somewhat less familiar with radio wave skip or skywaves in this age of FM and cable TV but many people still have experienced it at some time. As far as ducting getting VHF signal at longer then usual ranges might be a bit of a surprise.

But it’s not the wtf moment that happens with marine radar ducting. For one thing typically the radar is set on the 24 miles scale, the range can be measured and it’s gives an impossible result. The second oddity aside from the range is the scale of the display is wrong.

Mariner’s likely don’t expect to see half the length of Baja Peninsula on the 24 miles scale. And the return is a nice fit with the (small scale) chart. It’s a display of the coast with all the detail, not the mountain tops further inland

steamer, tengineer, yaught sailor & more all get the point. Maybe by and by we’ll exchange our call signs (those that have them). today the dark path, following the terminator is a common vhf (and other) pathway for DX. Skip refers to acually utilizing a skip off the ground and again off the troposphere. Ducting keeps the radio wave in the sky (between e and f layers) till it decides to come to earth again. Nothing unusual and entirely explainable. Hey, … the truth is out there !!
Now who knows about the “lady be good” and their possibly reading "through the back side of the loop?)

reading "through the back side of the loop?

With the old loop antenna, heading toward the signal source will give a course indicator deflection toward the source, if the antenna is rotated to the backside the deflection will read away from the source and give a false “on course” reading. Very confusing and difficult for a teenager in a dark plane with an engine out at night over a featureless and black desert.

One of the old 1940s RDF manuals will give a good explanation.

By adding the circular sense antenna signal to that of the polar diagram the true direction can be easily found. The resulting diagram is also called the heart shaped diagram.

By adding the circular sense antenna signal to that of the polar diagram the true direction can be easily found.

The ARN-7 ADF used on the B-24 incorporated a sense antenna … the Lady Be Good reported that the ADF was not working properly and they requested a DF steer from a coast station but for some reason they did not understand their position. The direction to the coast was not “easily found” by that crew.

dark path, following the terminator is a common vhf (and other) pathway for DX.

Was hoping someone would mention that.

As a side note – On a whim I tested for an amateur license a year or two ago. Looking at some sample tests had shown me I should be able to comfortably pass the Technician test, which I did. The testers pointed out that I could take the General without paying an extra fee, so I took that and passed. I failed the Extra by three questions, and it was the dirty details of propagation that did me in.

Ducting in general is not unusual, occurs about 25% of the time off California and about 50% of the time in Gulf of Oman. But how often does land hundreds of miles away display on the radar on the 24 mile range? I’ve seen it twice in my career.

Having land hundreds of miles away give a good return on the radar 24 miles scale may be entirely explainable but it’s not particularly easily explained. I didn’t understand it the first time I saw it and the second time I saw it an quick and simple explanation did not come readily to mind at the time.

There are two possible explanations for this phenomenon.

Anomalous propagation is an atmospheric condition that bends RADAR beams. This causes objects that would not normally appear on RADAR to show up on the screen. It can occur that the RADAR beam bends downward, striking objects that are normally beyond the RADAR horizon.

The RADAR beam bounces off something that is so far away that the set has sent out more pulses before the echo comes back. It is displayed as though it belongs to a later pulse, much closer than the real object is.

It’s both I assume. But what are the chances that the phenomena will be understood by the mate on watch the first time it’s seen?

Why couldn’t you explain it to the Dutch Weather Bureau?

Here’s how it goes:

The ship is hundreds of miles from land. It a beautiful clear sunny day. Nothing in sight.

The radar is on the 24 miles scale. On the radar the mate sees what must be a squall line. He has a look. Nothing there.

In my case the first thing that came to mind was not pulse repetition interval it was wtf???

Why couldn’t you explain it to the Dutch Weather Bureau?

We were on not a very good footing with the Weather Bureau because each mate on a selected ship was rated for the quality of his weather reports. They seemed to know our weather situation better then we did.

I remember that on one occasion the first mate was reprimanded by the captain because his rating had dropped from Excellent to Good. The mate argued that good is good but the captain spoke the famous words: ‘Good is not good, good is bad’. That statement sang around the ship for a couple of days…

The mate argued that good is good but the captain spoke the famous words: ‘Good is not good, good is bad’

Sounds like the USN enlisted evaluation system, at least as it was in the seventies. In theory 3.0 out of 4.0 is a pretty good eval, but in practice 3.6 is quite a bad one.

There are occasions when it will be difficult to determine if what you see on radar are real echoes. Always get a second opinion for what is displayed by the radar. That second opinion is gained by looking at adjacent radars to determine if they are “seeing” the same thing. Especially comparing a 3 and 10 cm radars on the bridge is very suitable for this purpose as there behaviour will be very different in terms of refraction.

A multiple-trip echo is harder to detect. It could be done by changing the p.r.f. which at a 24 mile range will be about 3375 pps. Bringing it down to for instance 590 pps the range will be about 137 NM which will remove the false return echo. Thus a change of the p.r.f. shifts the location of a multiple-trip echo and helps to identify it. In fact it is a simple modification but I donot expect it to be implemented in the near future… For the Navy it would be another matter I suppose.

Come to think of it you can always try to switch to different ranges because then other p.r.f.’ s are used.

It is common on the Lakes, too. Seeing all of Lake Huron on the 96mi scale or either end of Superior in excellent relief. Also, the refraction of lights is a neat thing. I have observed Manitou Isl, Stannard Rock, Caribou, Copper Mine, and Whitefish Point at the same time.

When we still used the SSB and WLC Central radio, you could hear Mobile on 405 at night. The Gulf was a different place by the time I got there in 2010.