Anyone Interested in a little history, The WW1 Gallipoli Campaign

People that took to the streets to protest the waste of US blood and treasure on what was sold as blood vengeance for 9/11 now not only vote, but volunteer and donate to the campaigns of those that stood up in Congress and gave their blessing to those conflicts.

So, you have an issue with a specific group: anti-war voters in 2001, who subsequently supported any politician, of one party, who voted for the wars. You consider them immoral. Wouldn’t any such voter be immoral, regardless of party?

You’re entitled to your opinion, of course. But if you only vote for politicians who are always right, or who always vote the way you want them to vote on every issue, you would never vote for anyone.

Historical example: In 1915, in WW1, Winston Churchill was the architect of the Gallipoli Campaign. A complete, utter bone-headed fiasco, with 250,000 allied casualties. By your standard, no British voter should have supported Churchill 24 years later, in WW2, when he led his country to victory, because to do so would have been immoral.

A personal example: I voted for P43 in 2000 because I was angry at the antics of P42. (Something about a gal and a cigar.) So, I based my vote on morality. But P43 was the architect of the wars that followed. Hoisted on my moral petard. Ouch.

most of the UK was against the Irag invasion ( made up from fake data), that had the largest street protest marches ever. 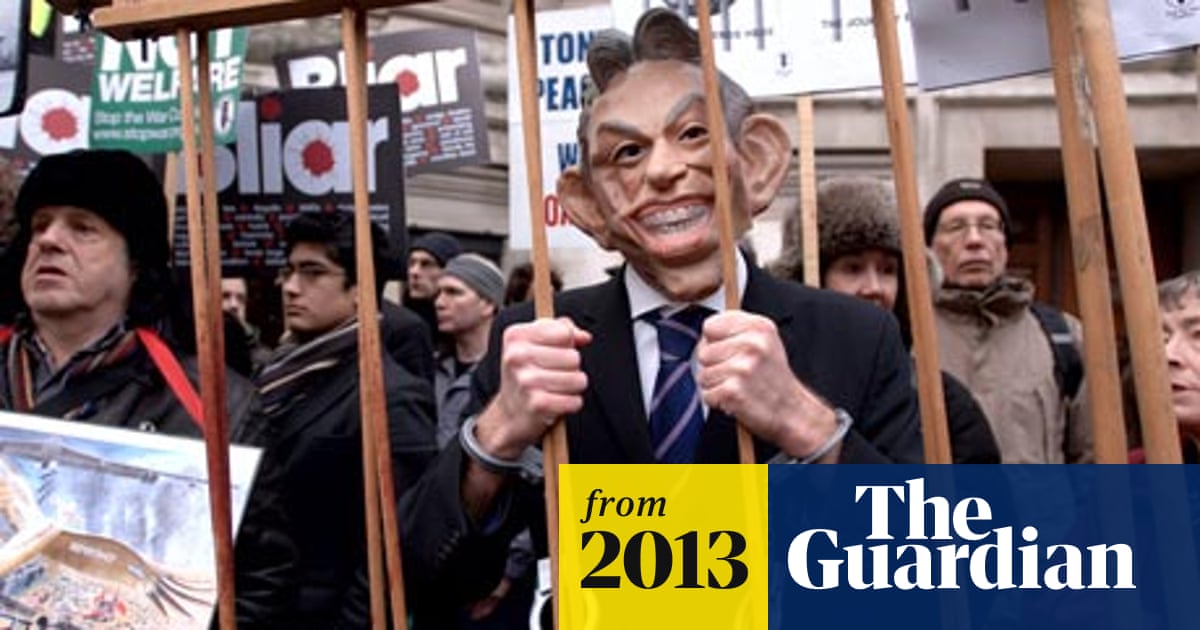 More than half of Britons believe Tony Blair was wrong to invade Iraq, while 22% tell YouGov he should be tried as a war criminal

those figures dont reflect the feeling there at the time…
For many it was the first time they had ever marched the feeling was so strong.

by 2013 they found out the data was fake just to start a war, that Bush followed.
Most believe Blair should be in prison for war crimes then and now.

the Gallipoli campaign was a plan that would of worked, got the enemy totally un prepared. The failure was the command on the ground decided to wait right when they had the upper hand which allowed the enemy to shift soldiers and guns around and pinned them down.
If you look at the area you can see it was the only plan and it was yards from working. Bone head local command trashed it. Aussies were bitter as they were stopped from advancing when they should of, their command was under the Brits.
8000 Aussies died

plan that would of worked, got the enemy totally un prepared.

The same could be said for every battle of WW1…

Since this is a nautical forum: the Gallipoli Campaign began when Churchill thought he could send an allied fleet charging up the Dardanelles to seize Istanbul, and with one blow knock Turkey out of the war. The trouble was, Turkey’s German naval advisors anticipated the attack, and mined the strait heavily in the preceding months, and installed heavy guns in the shore batteries. The allies lost three battleships and several smaller ships in a single day, to the mines. It was a turkey shoot. They turned back.

It was then that the British high command decided to make a land attack to flank the straits, which resulted in the bloody stalemate that was the Gallipoli Campaign.

My family lost two men at Gallipoli. Having visited the area I was amazed that the British and Anzac troops held out as long as they did. At Torre San Giovanni there is a full size representation showing trenches only about 8 yards apart. It would have helped if the troops had landed where they were supposed to but the buoys marking the area were swept away in the current.
The mines changed the planning and if the ships had got to Istanbul the concept would have worked.

they ships they lost were stripped down and used as sacrifices to break the cross channel cables and take out the mines, it wasnt a folly as you make out.
The land attack was yards from working but the command to stop or not advance caused the stalemate.
Ask any Turkish historian, they all know it would of worked had the allies just continued.
The halt allowed them to regroup and hold the allies off.

On the marine note, last time I went up the dardenlles 1989, our new black and white chart was surveyed in 18?? so we realized it was the same one as the used in WW1.
It had lots of updates.

they ships they lost were stripped down and used as sacrifices to break the cross channel cables and take out the mines,

What authority are you citing for this? The battleships that were lost were obsolescent, but they weren’t used as sacrifices to blow up the mines. I’m referring to Churchill’s own account of the battle: The World Crisis, Volume 2. Chapter 9. He wrote:

Churchill makes it clear the Allied navy had no idea the mines were there.

it wasnt a folly as you make out.

I didn’t’ say it was folly. I said it was a turkey shoot. Meaning, the mines made short work of the ships. Churchill felt that if Admiral de Roebeck had just kept going, the Allied fleet would have punched through to Istanbul. We’ll never know.

The land attack was yards from working but the command to stop or not advance caused the stalemate.

This is nonsense. Read Gallipoli by Carlyon, or any other authority on the campaign. The Turks held the high ground and had good supply lines. The trenches were in complete stalemate, until in November the Turks brought up modern howitzers. The worn-out Allies had no such artillery to respond, and were pummeled.

Winter was coming, and already soldiers were suffering frostbite. Winter storms would force the Allied fleet out to sea, leaving the army unsupported by artillery. The storms would wash out the landing beaches over which the Allied army got its supplies. The British generals knew it was time to leave.

Churchill took years of rightfully deserved criticism on that battle. Took a few decades to regain the trust of the people to lead his beloved country. He did much better later on.

This is nonsense. Read Gallipoli by Carlyon, or any other authority on the campaign. The Turks held the high ground and had good supply lines.

read turkish accounts, they dont agree with that.
When you visit you can see they had no defense of the cliff top looking into the dardenelles as they only expected a landing from the other side of the peninsula hence why it was a daring plan that almost worked.
Ozzie accounts all say they could of done it had they been allowed to and not delayed. The Turks agree it almost worked.

Sweeping the Dardanelles - Naval actions prior to the Anzac landing at...

By Mike Turner  On 18 March 1915 three Allied battleships were sunk by a line of 20 Turkish mines laid by the small Turkish minelayer Nusret in the Dardanelle Straits.

The ships were knowingly sacrificed to remove the known mine field, if they made it good, but they chose old vessels for a reason as did the French.

At an Admiralty meeting on 19th March, Churchill and Fisher agreed that losses were only to be expected and that four more ships should be sent out to reinforce De Robeck, who responded with the news that he was reorganising his force so that some of the destroyers could act as minesweepers. Churchill now told Asquith that he was still confident that the operation would be successful and was “fairly pleased” with the situation. (5)

Winston Churchill and obscure aspects of the Gallipoli Campaign (GALLERY)

Let’s look at the Gallipoli Campaign, the effects of which continue even today, through the eyes of Winston Churchill, one of the main actors of this war

Although the Gallipoli Campaign seemed like a failure from the British side, all of the ships Irresistible, Majestic, Ocean, Triumph, Inflexible, and Goliath, which were sunk or damaged in Gallipoli, belonged to the old class that was no longer needed.

Maybe if, at the very start, there hadn’t been ham-handed messenges to Flag-Mediterannean (VAdm Milne) to both aid the transport of the French 19th Division back to Europe from Algeria, cover/block the Adriatic to prevent the Austro-Hungarian Fleet from joining with the Italians (who thoughtfully decided in time that they were on the wrong side) AND prevent a breakout at Gibraltar by the Imperial German squadron of Goeben and Breslau, it may have ALL gone differently.

Goeben and Breslau ran across the Med TWICE before the Brits entered the war and then, far too late and with only a chance of success, a light detachment of the RN pursued them east to the Aegean where the Germans slipped through the Turkish Straits and, “…bearing more misery…than has ever been borne in the compass of a ship…” to influence the alliance of the Turks and Germans, barring the Russian Empire from supply and reinforcement by a warm water route, and eventually leading to Gallipoli and a host of modern day problems in that area of the globe.

Although the Gallipoli Campaign seemed like a failure from the British side,

Which ties into Afghanistan. Gallipoli lasted less than a year. We tried for 20 years in Afghanistan. Generals, and aggressive leaders like Churchill, by nature always think they can win, if they only have more time, or more men. If they didn’t think that way, they wouldn’t be very good generals. But at some point reality has to sink in.

The trait is not bad. Churchill made a great war leader precisely because he was always on the offensive, and kept thinking of new ideas to win. Many were useful. Some were not. But in total they helped Britain win WW2.

(One unhelpful thing: In WW1, as First Lord of the Admiralty, Churchill was against using convoys to protect merchant ships from U-boats. He thought it was a waste of naval assets. Always aggressive, he thought merchant ships should be armed to take the fight to the U-boats themselves. They were armed, and the U-boats kept sinking them, until a new FLOTA came in and began the convoys. Even at the outset of WW2 Churchill was still anti-convoy, but the Admiralty convinced him otherwise.)

The campaign was to control the Dardanelles which would allow access to pressure Istanbul, but that would have been another campaign later.

wikipedia
The Gallipoli campaign [a] was a military campaign in the First World War that took place on the Gallipoli peninsula (Gelibolu in modern Turkey), from 17 February 1915 to 9 January 1916. The Entente powers, Britain, France and Russia, sought to weaken the Ottoman Empire, one of the Central Powers, by taking control of the Turkish* straits.

While Tuchman’s “The Guns of August” is a great entry level read for the early weeks of WW I (including a familial take on the Goeben running for Turkey), I highly recommend Robert Massie’s “Castles of Steel” for a very readable and informative perspective on the naval side of WW I. It is the 2nd book (after “Dreadnought”) that takes the naval arms race between the UK and Germany as a casual factor for the war.

Personalities, families, crisis small and large, it is all in there! He does a thorough job with the water side of Gallipoli and how/why Churchill managed to “step in it”. They are not small books but are worth a read on a long hitch or by the window, feet up, bourbon in hand, during a rainy day at home.