Another Hurricane, Another Push to get rid of the Jones Act 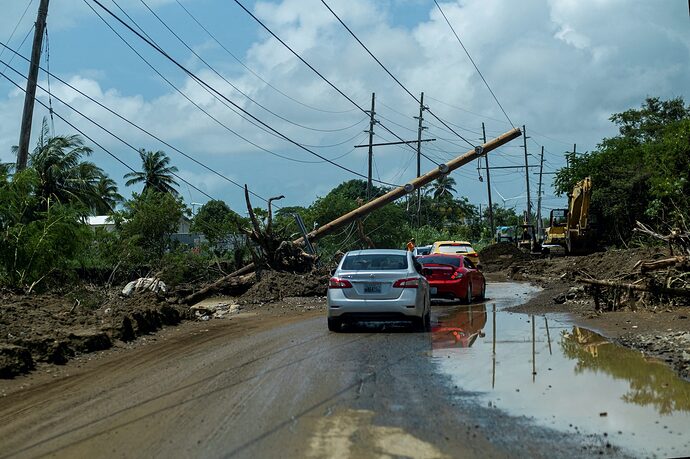 Puerto Rico’s Governor has sent a letter to President Joe Biden requesting a limited waiver of Jones Act for petroleum products and LNG as the U.S. Commonwealth continues to recover...

The tanker with a load of diesel is the Marshall Islands-flagged GH Parks ,

From the article: “As reports of the GH Parks parks began circulating online, a Jones Act articulated tug barge (ATB) belonging to Jacksonville, Floriday-based Crowley was delivering diesel to the island.”

This AIS position is from 23 hours ago. 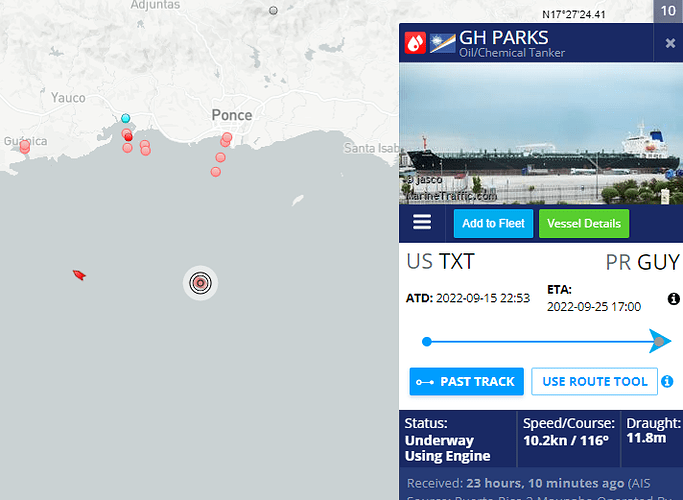 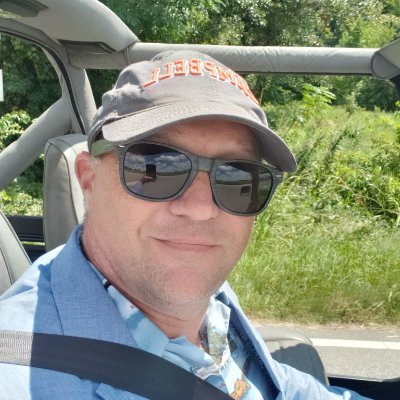 @mercoglianos
1/There is much more to the #JonesAct waiver request for #PuertoRico after #Fiona than is included in Gov Pedro Pierluisi letter. The media is being fed what the oil companies want them to say. Puerto Rico's Governor Calls on Biden for Jones Act Waiver gcaptain.com/puerto-ricos-g…
3 Likes
Truckie1794 September 28, 2022, 2:15pm 22

So BP charters the GH PARKS to load in Texas City and she departs on 15 September. The storm was only declared a tropical depression on 14 September and made landfall in Puerto Rico on 18 September. Now she’s just hanging out waiting for a Jones Act waiver. The timing seems sketchy.

The timing is perfect for the publicity stunt that it is. The news is full of pictures of desperate people lining up with gas cans to get fuel for their generators. The gas stations claim a fuel shortage and, voila, a tanker full of fuel shows up just off the beach but is prohibited from delivering fuel to the poor struggling peasants because of what they are being told is an out of date and cruel law.

Like the old saying goes, “Never let a good disaster go to waste.” The PR citizens are the victims of greedy, cynical, and treacherous bastards here and on the island.

The timing is perfect for the publicity stunt that it is.

Exactly! Would be great if there were a news organization that would look into and report on those details.

only declared a tropical depression on 14 September and made landfall in Puerto Rico on 18 September.

It’s very common for tanker cargos to get sold, and discharge ports changed, multiple times during a voyage. Sounds more like someone is gambling on a windfall if they can get a waiver.

Timing alone does not necessarily indicate ill intent. It’s very common for tanker cargos to get sold, and discharge ports charged, multiple times during a voyage. Sounds more like someone is gambling on a windfall if they can get a waiver.

Precisely, the tanker transport companies and oil companies play the game very well. BP is a master at arbitrage. Few people know that BP is one of the larger commodity traders on earth. To many people that would seem unfair…a major oil producer and refiner making bets on supply and demand. Of course the trading part of BP swears they never communicate with the supply and refining side of BP. It’s not just BP, Koch and others have been playing the same game for many years. Insider trading is a no lose situation. Take the money and pay the politicians to make sure no one looks too closely.

Just out of curiosity, how many here have written to any of the eight congress-persons to express our concerns? By write a mean a calm, professional letter, in temperate language.
I’m not interested in excuses why not, just do it, and yes, it may not change anything, but you miss 100% of the shots you don’t take.
Most of the public have no idea what the merchant marine is, let alone the Jones Act, they need to be educated, MARAD isn’t gong to do it, so if we don’t, we continue to fail, the U.S. flag merchant marine will die, and along with it our pensions, our jobs, our family’s health care, our family’s security, our children’s future, and everything else our jobs bring us.
To me, all that is worth an hour of my time writing a few letters.

@cpgrabow , you’ve come here before to espouse your supposedly researched Cato pieces on the Jones Act, so please explain the utter BS that is this article:
The Jones Act’s Harm in Real-Time | Cato at Liberty Blog

Harm in real time?? You, like every other news article states erroneously that this tanker not being permitted to offload is somehow preventing diesel from otherwise getting to “supply the islands numerous power generators.” Except that’s not true is it? As there is no shortage according to the receiving terminals, the governor, the Coast Guard, and the fact that Crowley’s tank barges are making deliveries and meeting demand. Therefore this foreign tanker is unnecessary.

So where is this “harm” you speak of? What “people of Puerto Rico must wait”, wait for what? Specifically what generators are going without fuel on account of this tanker not being permitted to fill tanks that are not empty?

They got their waiver.

Statement by Secretary Mayorkas on the Approval of a Jones Act Waiver for...

Can none of the MSC tankers provide relief? Most of that fleet just sits around right?

Therefore this foreign tanker is unnecessary.

If it’s unnecessary then why do people in Puerto Rico want to buy the fuel?

Presumably these yet-unnamed people are as uninformed and opportunistic as the rest of those writing vague inaccurate articles.

But you still failed to defend your published contention that this BP tanker shipment could supply generators with fuel that they aren’t currently getting, and because of that people are harmed. By all accounts that’s not remotely true.

Where did I say that? And how do you define “need”? Do we have to wait until people run out of fuel before there is a need? I assume people want to buy the fuel because they need it.

" a ship laden with 300,000 barrels of diesel fuel from Texas has arrived off the island’s southern coast that could help supply the island’s numerous power generators. Thanks to the Jones Act however, unloading the valuable and timely cargo would be illegal. …
…This is the Jones Act’s harm in real‐​time."

Your implication is that there was some un-met need for this fuel. At the time you wrote that, the fuel suppliers on the island were telling government officials and FEMA that they did not need it. Therefor no, it could not have helped supply the islands generators because they were already being supplied.

You assume people want to buy the fuel? What people. Every bit of news footage I saw of PR today showed people at gas stations filling their tanks…which means the gas stations have fuel…which they get from suppliers on-island…which had the fuel they needed from regular shipments from Crowley and other non-waiver Foreign vessels…thus making the GH Park nothing more than an irrelevant point of argument for those who despise the JA.

So someone is buying 300,000 barrels of diesel on a lark? For fun? And this diesel won’t be used to help supply generators? Anyway, if you are right and this diesel is unneeded and people don’t want it then whoever bought it will take a big financial loss.

People in Puerto Rico do NOT want to buy that fuel.

People in Puerto Rico just want to buy whatever fuel. They don’t know or care where it comes from or what ships bring it. Fuel is plentiful readily available in Puerto Rico.

To the extent that some gas stations may be out of fuel caused by storm damage, lack of electricity to run pumps, washed out roads, or whatever, that has nothing to do with the Jones Act. Nor can it be alleviated by a Jones Act waiver.

This particular request for a Jones Act waiver is a publicity stunt orchestrated by you anti-Jones Act evangelists. It’s pernicious misinformation.

If the average American were informed about the pitiful wages earned by third world seamen they would be shocked and want to expand the Jones Act.

If the average American were informed about the pitiful wages earned by third world seamen they would be shocked and want to expand the Jones Act.

Americans would feel so bad about those seamen that they would want to…throw them out of work?

Hey that’s a great point. I’m as curious as the next guy who consigned a load of fuel from a supplier that they knew would not legally be able to deliver it without a waiver that hadn’t been received yet, may not have been requested yet, and for a need that might not exist…but based on the definition of the term speculator, I’m going to go out on a limb and say it was a speculator.

If it ends up actually being needed, then it’s great option and that’s why waivers exist. But for everyone opposed to the JA to immediately and in advance hoist their flag and say “Look at this injustice, look at this vessel sitting right there, look at this harm!” is so disingenuous as to be discrediting.

Can none of the MSC tankers provide relief?

If I had to guess, it’s a matter of logistical hurtles that the Navy and Gov’t won’t overcome.

I was on one of the T-AO’s after a hurricane (who’s name I can’t recall) and we came down to refuel the Navy ships bringing relief equipment/personnel to Texas. So in theory there’s a way. But obviously their primary function is supporting warships, so someone would have to determine the humanitarian tasking supersedes the military readiness need.

Also the Kaiser Class capacity is something like 180k bbl for the single hulls / 160k bbl double hulls / and slightly less for the new Lewis Class. And that is split (maybe not 50/50…its been a while) between fairly dedicated Diesel and JP-5 tanks. I’d hate to see the Cargo Mates face if he were told to load diesel in the jet tanks for one run.

Why do you want to throw U.S. seafarers out of work? How much hold over Charley Koch does Putin have?