There is nothing cheaper than talk. It sounds great but until the IMO makes some major changes to SOLAS minimum firefighting equipment standards, this is not going to happen. I’ll head you off at the pass when you inevitably tout the benevolence of norwegian shipowners. These mega ships are run by companies that look more at the bottom line than the ‘right thing to do.’

I’m all for them upping the regulations in ge interest of safety but I won’t hold my breath while I wait.

I’m outside my comfort zone commenting here, but I have to remark this all sounds distressingly similar to the conversations going on about the loosening of the regulations governing offshore drilling, and the ones I heard in the computer security field years ago.

Those conversations taught me that there is no business case for spending on safety or security that will convince the hardnosed spreadsheet jockeys. Imagine yourself going up in front of an audience of venture capitalists and investment bankers with the following pitch:

In today’s short-term, rapid management turnover world, a nontrivial percentage of those spreadsheet jockeys will think “To hell with spending that money with no visible return. I’m going to make sure my golden parachute is properly packed and roll the dice.” Of course, they can’t say that explicitly because they’d get twitter bombed. So they issue press releases and put up Safety is Job One signs. Watch what they do and you’ll get the real message.

The simple fact is that a person either feels a moral imperative to preserve human life or they don’t. If they don’t, running a business can be pretty simple.

In international shipping nearly all ships are standard designs and built at a relatively small number of shipyards, mainly in N.E.Asia. This is especially so for large tankers, bulker, LNG carriers and Container ships.

You are right, they are designed, built and equipped to the minimum required standard as set by IMO and Classification Societies, with some flag state setting slightly higher requirements than others.

There are also a few Shipping Companies that set their own standard a bit above the min. requirements, but far and away the largest number are Asset Players, not old fashion Shipowners, who cared about their ships and crews.

Whether you like to hear it or not, Scandinavians are among those who set higher standards, (Maersk among them) but there are also Scandinavians among the pure asset players, who care for nothing else than the bottom line. (I could name some)

In the offshore, short sea and specialized shipping there are still a few of the old fashion Shipowners, who have themselves been at sea. They know ships and care about their crews, but they are also bound by the need to make money for their share and bond holders.
I don’t know if there are any of that type in US shipping, except for small tug owners maybe??

Are Maersk at a Black Swan moment?

MAERSK HONAM Mar 12 Update. Is Maersk too big to be safe?

Maersk issued statement saying that three bodies of those four missing were found, yet unidentified. Frankly, there was little hope from the very beginning, from the day when crew left the ship and… 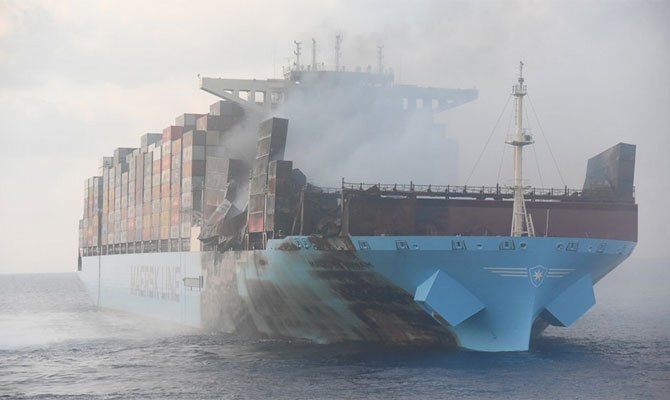 Salvors have found the human remains of three of the four missing crewmembers onboard the fire stricken 15,000 teu boxship. Maersk said it now assumed that the missing fourth seafarer was also dead taking the death toll to five from the huge fire...

How common are container fires and are they usually extinguished by the crew?

Likely data on the number of small fires is not available. Maybe an estimate could be made using the power law or the 80/20 rule.

When I worked in claims for MSC we’d see that reefer gensets, especially the ones that are long in the tooth or had been sitting for a while, caught fire all the time. These incidents were usually minor since they are on ships electrical power and are generally limited to a fried motor, but occasionally the unit would overheat and start burning the insulation. Since the crew would be out there checking temps regularly any signs of distress were usually caught early, but they still happened.

Activated Carbon was definitely the most frequent firestarter. It wasn’t handled as a risky DG back then, at least not by MSC, so we had a spate of events where the boat would call in saying a box in the middle of the stack was baking and they usually could not reach it. So it became a guessing game as to whether it would light off or not. Luckily the stuff tends to smolder rather than burn but in those cases your main concern was what was stored around it setting off moreso than the firebox itself.

Undeclared DG or intentionally mis-declared DG for a lower rate was an absolute plague in the company, but profits were good so the general opinion was not to ask questions. Close calls were far too common IMO.

Here is an update from the P&I Club Guard re; misdeclaration of cargo:
http://www.gard.no/web/updates/content/25186996/tackling-cargo-misdeclaration-a-first-line-of-defence-against-container-fires

Long and detailed, but very informative.

The fire on Maersk Honam is not yet fully extinguished and the vessel is not yet in port:

Maersk Honam Battling a Fire for Over a Month

The fire which erupted on board Danish-flagged containership Maersk Honam on March 6 still burning.


The cost to insurers is expected to be very large.
Maersk has declared General Average to reduce their exposure.
Steamer April 11, 2018, 2:27pm #51

“The fire which erupted on board Danish-flagged containership Maersk Honam over a month ago continues to burn. However, the fire remains under control …”

WTF is that supposed to mean? Does it mean the ship will keep burning until it is destroyed but rather than burn up in a few days it will take months of carefully monitored burning before it becomes a charred hulk?

Now that is what I call “spin.” It’s like saying the ship is flooding but the flooding will be managed until the ship sinks.

2 posts were split to a new topic: Container Weight Verifiation and other