Does ECDIS need a new approach?

It sucks that unless you have two separate ECDIS on the Bridge You still need to have Paper Charts So what’s the point on these newer Super ATBs and Supply Boats, The company will only buy one, Even though they just spent 50+ million Dollars on a Vessel.

ECDIS requirements stopped at 3000grt last I looked it up, so most supply boats dont require them under the rules?
Is that still true?

I agree the ECDIS with paper charts back-up is a bad solution. At least in my experience.

First there is the extra workload of ordering charts, keep them updated and drawing the tracklines on top of having to maintain the primary ECDIS. Not having that second ECDIS makes it difficult for the second mate / captain to do voyage planning without interfering with the bridge watch use of the single ECDIS.

The back-up ECDIS can be mounted near the chart table for easy access for planning.

not sure But it seems that anything that sells itself as a SOLAS vessel has to have it,

the 2 are for redundancy also costs go up as both need individual UPS, havent checked but I imagine gps antenna each etc?
ECDIS in DP2 mode…

Maintaining a full paper chart portfolio has costs as well

The ECDIS with chart back-up might be OK on some ships that always trade in the same area and not a lot of time is spend on planning.

For ships that trade over wide areas or jump from trade to trade using paper charts as a back-up probably just about doubles the already high workload. Also the ship can’t make a port call or change the route on short notice without the paper charts being physically on board.

As far as the premise of the linked article in the OP, I do agree the making the interface more user friendly would be a needed change. As it the a joining second mate can face a very steep learning curve just ordering and downloading the charts for example

The reports of ships just silencing the alarms is another indication.

I got a CD from the ECDIS class with a checklist to use as guidance for setting up the ECDIS. I spend almost three days in port one time and spend all my spare time to working up some checklist / procedures based on the manuals and CDs which greatly reduced our problems with nuisance alarms. UKC and depth contours not set properly are the cause of most of most nuisance alarms.

It’d been far better if that guidance had been provided to the crew in the first place rather than having to work up our own.

Alarms on the bridge are another total IMO/Class/Flag failure.
On DP vessels ( more gear and PC’s) cant tell you how many times 3 or 4 on the bridge are pulling panels everywhere to find what box some alarm sound is coming from.
I guess we got lucky that never happened at a critical time or the fault manifested itself to an operating issue.

Maintaining a full paper chart portfolio has costs as well

Not if the master requires the mates to do all chart work (inventory, ordering, correcting…) while on watch. You’re just not thinking creatively.

Well when else are you supposed to do it???

I was thinking of costs in general, not just ot.

For example being assigned to a new run but not being able to start on the paper chart side while on an ocean leg but instead having to wait to get the new charts during a coast-wise when workload is high.

Or things like wearing out the second mate on clerical stuff. Transfering track-lines / waypoints and chart corrections is tedious enough, knowing none of it most likely ever going be used can be discouraging.

And not just the 2nd mate, the C/M enters the chart orders, takes up my time as well as I often have to get involved.

Overall risk would be reduced if the focus was 100% on the ECDIS.

As one who sailed as second mate with a full outfit of about 60 folios of Admiralty Charts if my memory serves me right I wouldn’t wish it on anyone. I welcomed ECDIS and I believe it gives unparalleled situation awareness if used properly along with the bridge windows.
The ideal setup is in addition to the two units being visible from the conning position having a seperate station by the chart table so that passage planning can be done without hindering the bridge watch.

yes ECDIS was a great step forward with the the worst implementation you could possibly imagine.
Cant see it getting better on board with more automation and electronics.
IMO got to make a big jump forward to get control of this before crew can only work on one vessel after extra training

A post was split to a new topic: Ditch the GPS it’s ruining your brain #2

On that alarm identification topic, there are far too many alarms from the electronics that are difficult to identify and that destroy situational awareness.

Simple solution: all alarms must be accompanied by a voice announcement of what the alarm is, and how to silence it.

Great. What I wanted was one button to silence any alarm on the bridge and a display to tell me what equipment was in an alarm state. The watch keeping alarm buttons around the bridge could serve this additional purpose. It works in the engine room with often more than 450 alarm points and counting.

As one who sailed as second mate with a full outfit of about 60 folios of Admiralty Charts if my memory serves me right I wouldn’t wish it on anyone.

That sounds like the Champion class T-5E’s. Every time we changed op areas the 2M would grab the 3rds for corrections so he could concentrate on routes.

I welcomed ECDIS and I believe it gives unparalleled situation awareness if used properly along with the bridge windows.

What about this solution?: 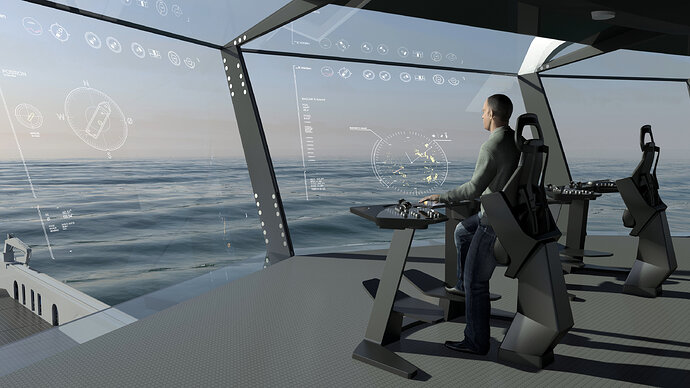