Speaking of outrage meth, I hear same sex couples referring to each other as husband and wife. I’m assuming their kids refer to them as mom and dad, not mom1 and mom2 or dad1 and dad2. Why would those kids be offended if others refer to their parents as mom and dad, the same as they themselves do? Why does the AF care? This whole rigmarole is a tempest in a tea pot.

Oh, and by the way, I think the training in question is mostly silly. I think the half the stuff they’re taking about will be forgotten in 20 years. Because society progresses organically, not programmatically.

What I’m commenting on is the effect of outrage media on the public, and how pernicious it is to society.

Why does the AF care? 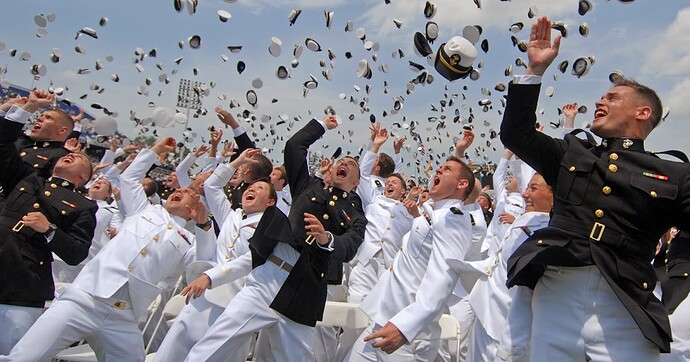 Anyone that has sat at a dining table on a ship with people from many cultures can understand where some standard of how to consume food would be nice.

So, show me the regulation on what moms and dads will be called.

I’m sure you’re correct that no such regulation exists. I would say mainly because until fairly recently, suggesting one should exist would get you laughed out of the room.

That fact doesn’t make it any less enforceable. Let’s say cadet 1 files a complaint with the D&I office claiming he/she/they/zi was triggered by cadet 2 talking about his own mom and dad’s nurturing ways whereas cadet 1’s daddy wasn’t around during the formative years. My supposition is that cadet 2 is going to have a problem. Doubly so if cadet 1 happens to be in one or more protected classes.

I don’t think cadet 2 saying “yeah I remember those slides and the ample context the trainer provided, but since it’s not in the regs, I’m not following that shit” is going to fly.

What I’m commenting on is the effect of outrage media on the public, and how pernicious it is to society.

As far as this, what I find much more pernicious to society is the actual topics that people are outraged about.

Caution! You have entered

Well, as a graduate of Air Force Officer Training School class 62 Bravo, I can attest to the fact that formal dining etiquette for aspiring officers was not only taught but enforced. Dunno about today …

In case you missed it the thread is about recruit training - not officer training school.

Sorry about that, go confused because the link to equipedia describes an officer-specific event, e.g., a Dining-In.

No worries, thank Freighterman for that one.

I didn’t claim that, did I?

But why don’t you require the same level of extraordinary proof when it comes to the “don’t-call-them-mom-and-pop” slide?

In response to my question as to why does the AF care about what recruits call each others’ moms and dads, you responded with this, featuring a photo of an officer graduating celebration. What’s the connection then?

“But why don’t you require the same level of extraordinary proof when it comes to the “don’t-call-them-mom-and-pop” slide?”

I never commented on mom & pop slides. Your question should be directed to whoever did so.

Your deflections are getting tedious.

The Royal Navy used to run a course called unofficially “ the knife and fork course” at Greenwich in London. Participants were sub-lieutenants and attended lectures by academics from London University, the Imperial War College and the London School of Economics. Officers could also take a course to improve a foreign language that they had previously studied. Mess dinners were held in the famous Painted Hall, and were conducted with strict regard to etiquette and tradition. One of the best after dinner speakers was Peter Fleming, brother of Ian Fleming. Peter Fleming was a skilled mountaineer with a fluency in a number of Asian languages. As a spook in WW11 it is possible he was some of the inspiration of the Character of James Bond.

Kings Point cadets used to get the “knife and fork course” with “labs” where they would bring in young ladies from nearby schools for social gatherings to observe if the KP cadets exhibited proper deportment. Don’t know if they still do this.

You can refer to someone’s mom and dad without knowing their situation because the overwhelming majority of people come from that situation.

It’s not rude, or offensive. Anyone claiming otherwise has surrendered to crazy bullshit. I say surrendered, because the people arguing otherwise in this thread don’t actually believe it themselves. They have capitulated out of cowardice.

People push non-gendered language with the goal of dismantling. They do not have a sustainable replacement. They have a theory that once enough people think that way one will magically appear. I for one don’t trust them.

The fact that this went anywhere but ‘Lol, what a bunch of crazy bullshit’ on this forum is disturbing. Crazy bullshit has always existed. Men in dresses aren’t new. Pretending we have to change our use of language as a result is.

Service Etiquette by Oretha D. Schwarz…ahhh, memories of 2nd copies and a sharp knife, cutting page by page to hide a walkman cassette player or a half pint of Beam. Good times, good times…

Holy crap! This thread is almost stupid enough to be a vessel manager.
Every generation claims the ones that come after are inferior, and yet society moves on.
The U.S. isn’t in downfall, inspite of what Fox and Sinclaire tell you.
Gen X fought two wars, and if the U.S. goes to war, the military will get a lot less selective about recruiting standards.

The biggest threat to U.S. war making capability is not the military, its lack of sealift

Edited to add; Emma could likely kick most if your asses