When I sailed third mate there was a written requirement to call the captain for any CPA of less than 2 miles. First time on the 00-04 watch I called the captain; I told him I was going to achieve a 2 mile CPA by compliance with COLREGS, he thanked me politely. The second and third times the response was increasingly less polite. At that point AB told me that the captain did not in fact want me to call. The captain never explicitly said this but it was implied.

The new third mate has a choice; if they go CYA and stick to the letter of the instructions this will likely result in subtle ( or not so subtle) disapproval and no promotion. This mate is qualified to work as a clerk at a DMV.

On the other hand, the third mate that develops the skills and good judgement required to operate safely in ambiguous situations and gain the trust of the captain, that officer will get promoted.

Same holds true with sailing master. There are many situations where it is not possible to both comply with every rule and regulation and operate safety. In those situations the key is to use skill and good judgement to stay out of trouble.

It’s just how it is in many places shipping.

Six years ago I too said I’m not doing it anymore and I don’t miss it.

Operating a RO/RO on a non-liner run at a high tempo requires that tasks that that might normally be left to more experienced senior officers have to be done by less experienced junior officers and they have to be brought up to speed as quickly and efficiently as possible.

Non-containerized cargo ops, navigation in unfamiliar areas, dealing with heavy traffic etc. These are the type of skills that must be transferred.

Precisely but it doesn’t appear to have filtered through to many in management. Old approaches like doubling up of watches are not workable.
Loading RoRo ships goes pretty smoothly when it is just cars. Throw in uglies like excavators, bulldozers, CKD’s and movable decks and it gets more complicated. Couple that with most of the ports worked by these vessels are in high traffic areas often in reduced visibility.
In the early days of VLCC’s when we were feeling our way with inert gas and crude oil washing where we required a mate on deck and one in the control room (by law in Europe) we had only three mates.
With just two mates on a feeder container ship as an exempt master with some longer passages the second mate had to be just as familiar with the loading program as the mate.
At least I didn’t need to concern myself about the pilot ladder.

After leaving the sea I started to inspection and vetting ships . I always refused to check and control the written and/or computerized working hours records because all fake due to nowadays short crews . I’m now retired but always in full disagreement with some STCW rules and tankers vetting systems.

The frustrating part is STCW reporting requirements happened just as owners decided to reduce crew. IMO, being toothless, never investigated the work/rest reporting along with number of crew onboard.
After all, who has ever seen an IMO/STCW inspector ride along and verify? IMO/STCW is an idea dependent on companies self regulating. It is all theatre. I have no knowledge of an IMO prison for violators, perhaps there is one but I have never heard of one.

I fully agree with your comments. A tanker is subject to thousands of periodic inspections ( Class, flag state, vetting, USCG , port state and so on). In my view the problem is that all inspections are based on existing flag requirements, minimum safe manning certificate including.
Irrespective of flag state, minimum safe manning is always totally inadequate and this should be changed in order to comply to IMO/STCW regulations.

It is not rocket science to escort someone to a bridge, if an AB is not capable of doing it they should not be an AB.

With respect to the security personnel escorting the pilot, the regulations require the transfer of a pilot to be overseen by a responsible officer and in this context the definition of a responsible officer is a certificated officer or a person of appropriate training. Overseeing of the pilot transfer by a member of the security team is good utilization of available manpower provided they are suitably trained to carry out that role.

From here: Where is the responsible officer?

Minimum Safe Manning is about sailing a mythical ship of a particular size from mythical Port A to mythical Port B. It does not take in to account the operational environment or tempo of a specific vessel. That is in the ISM Code/SOLAS Ch. IX.

Like many things, the problem isn’t the (non)existence of a rule, but the enforcement or lack of enforcement of said rule.

In the dim distant past they had People called “time and motion” experts “ who studied the most efficient way of carrying out tasks. They have seemed to disappeared but I dare any they would be totally confused if they were given the task of arranging the tasks onboard a vessel with modern manning and complying with the rules.

True but in my view it should be an easy task just taking into account the worst navigation situation which a ocean going ship can encounter whilst sailing. The same whilst discharging in port and/or during a ship to ship oil transfer ( as an example a VLCC discharging oil at LOOP and then ship to ship transfer) . Then comparing all this situations to all ( too many) existing laws and regulations. The result should be the crew necessary in the minimum safe manning certificate if we really want safe ships and not only economical interests which are also important but secondary to safety.

Great idea. The sky has just been treated to a wonderful display of flying pigs.

There are some very interesting comments in this forum that bring back many stressful memories. As I am new to gCaptain Forum I will briefly describe my experience. I am a retired Chief Engineer (two years retired) having spent 48 years in the Merchant Navy, 33 of those as Chief Engineer. My experience was on Reefer Ships, Container Ships, Cement Ships, and for the last eight years of my career in the Oil and Gas Industry working on AHTS vessels. The gripe in this blog has been covered many times and it generally falls on the deaf ears of those in the position to make the necessary changes that are required. We all know that this all started with the introduction of STCW back in the 90’s. The regulations from the start were unrealistic and it came along at a time when shipping was undergoing dramatic change in size of vessels, rapid port turn-around times, reduced manning, reduced hours of rest, stringent and frequent Port State Inspections etc. The Master became more than ever the “Meat in the Sandwich”.
He was often put in a position where he was “Damned if I do and damned if I don’t” situations. As Chief Engineer I have been in the same position many times also.
The major shipping companies changed their registry to FOC and this allowed them to then employ sub-standard crews from 3rd world countries. In some cases this back-fired with some fatal and expensive incidents but in the big scheme of things the company “Bean Counters” were happy with the new reduced manning, reduced wages and increased time of contracts agreements. It’s possible to become blue in the face on this topic but I’m not going to. I would like to finish by declaring my sympathy for those Masters, Chief Engineers and all officers presently in the industry. Not many of these I suspect will recommend a career at sea to their off-spring as used to be the case in the past.

If you’re sailing coastwise, on any ship, arrivals can be as nasty, too. I sailed on a tanker years ago where most runs were very short, an overnight in between after 24 hours in port.

Today, I routinely go aboard a cargo ship that calls at three ports in as many days. Everybody is tired all the time on arrivals and departures.

You summed it up very well. I asked my Filipino officers on one ship if any of their children were looking at a career at sea and none of them were. Most were paying large sums of money to private education providers to ensure their children had every opportunity for well paying occupations not necessarily in the Phillipines.

At least the 2nd Mate doesn’t have to follow the pilot all the way to the chopper: 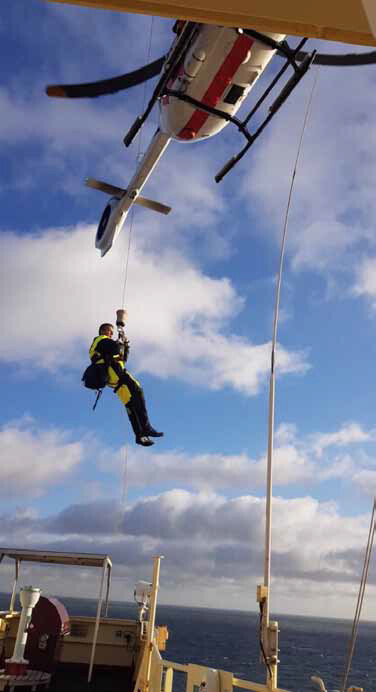