An what do the passengers on the foreign cruise ships do ashore?

I don’t know but they must be finding something interesting, since there are expected to be 232 cruise ship calls in Ålesund between now and 12/12-23:

Kaiområdene - Berth assignments Here you will find an overview of all registered cruise calls this year and the coming year. Please note that the berth assignments are not final and may change at short notice. Kaiområdene Stornespiren, Prestebrygga...

BTW; I see Fred Olsen Cruise’ M/V Bolette will be here on New Year’s Eve, before heading back to Southampton.

On Norway’s National Day, 17th May there will be two large ships in town, the M/V AIDAnova and M/V Iona. Some of the passengers and crew are usually invited to join in the parade and festivities in town. No, it is not a military parade but kids and grown-ups “marching” together: 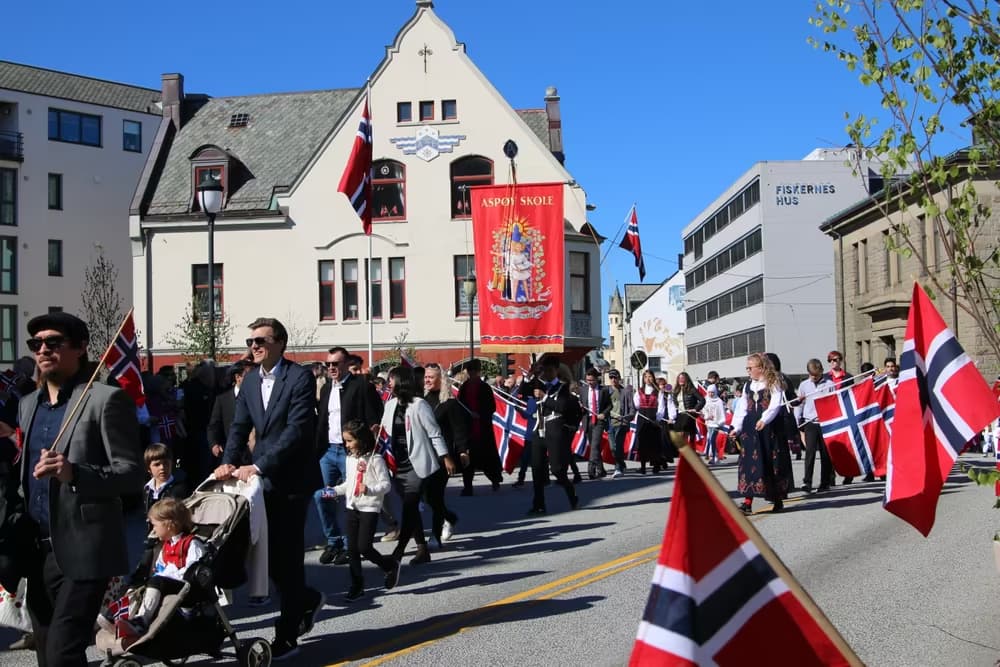 Here is a video from last year’s 17th May celebration in Ålesund (if allowed in your area): 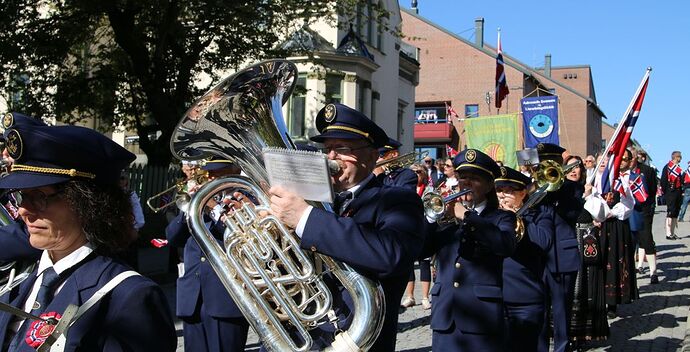 Last year MSC Gandiosa was here on 17th May: 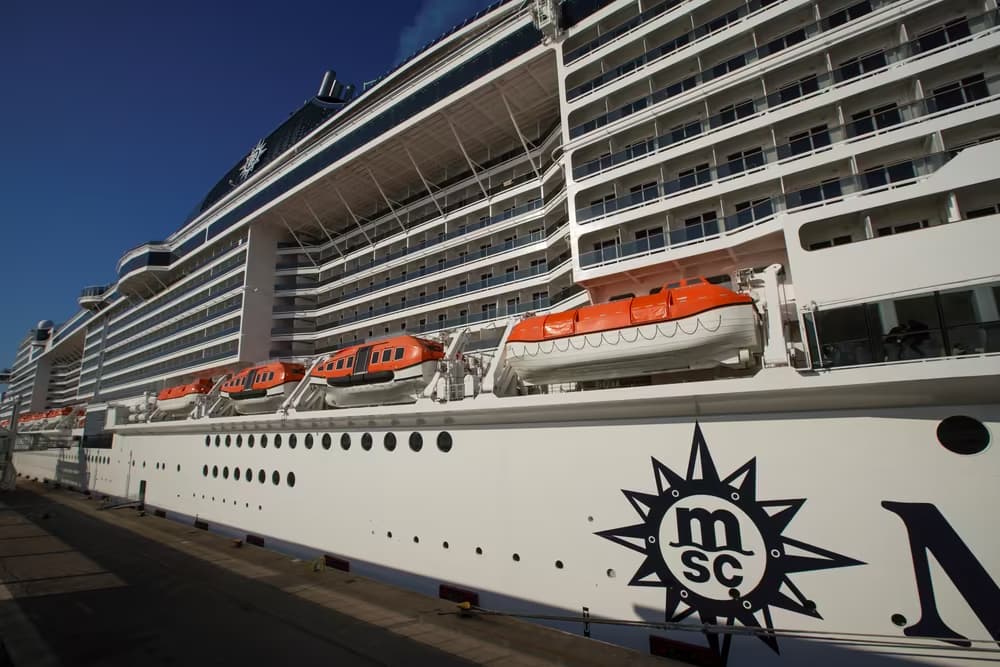 image1000×667 83.8 KB
MSC “Grandiosa” is 331 meters long and has room for over 6,000 passengers. The Italian-owned ship started operations in autumn 2019, just before the pandemic hit. It was for a while the only cruise ship in the world that was in almost normal operation, during the worst of the shutdown. On 17 May, the ship was in Ålesund, for the very first time.
PHOTO: ANDREW MEDICHINI NTB / AP
ombugge December 26, 2022, 3:25pm 366 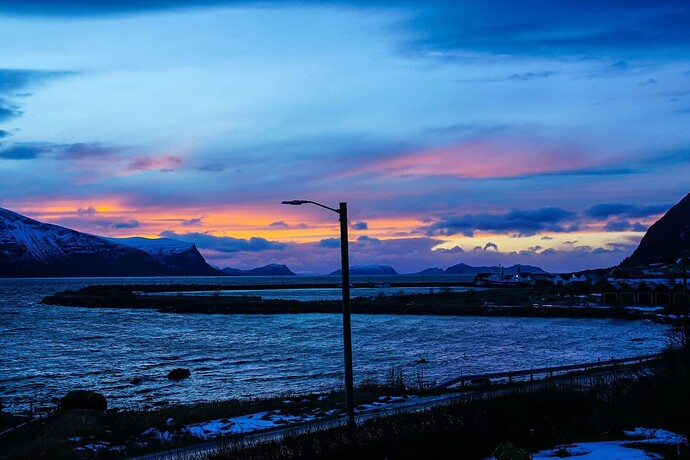 A Christmas necessity:
Before: 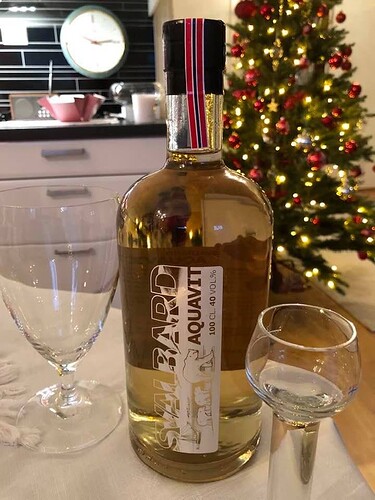 Sorry, no “After” pix. (The empty is in the recycling bin) 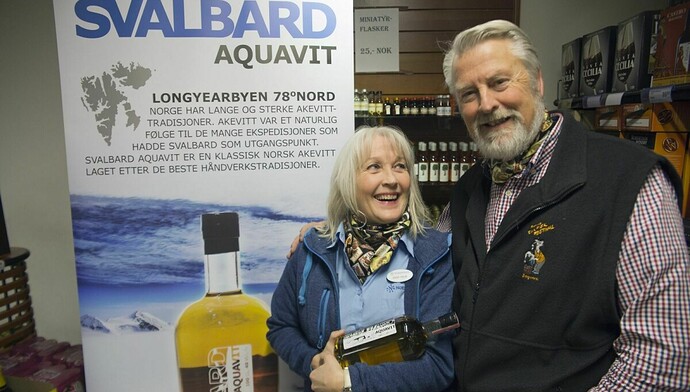 (+) Giving the water of life as a farewell

Vigdis Folde has spent seven years in Svalbard and at Norpolet, but is moving next summer. As a parting gift, she is giving the archipelago its own aquavit.

The Svalbard Aquavite contains the herbal plant “Sjørbuksurt” (Scurvy herb) which is full of vitamin C. It is an important plant of the cruciferous family, which grows quite a lot around Svalbard, and which was vital to the old trappers.
The leaves of this plant are full of C vitamins. These very scurvy herbs ended up in Svalbard Aquavit, which is made especially for Svalbard.
Herbs from the Barents region have been used, such as watercress, rose root and scurvy herb.
All fauna in Svalbard are protected, but thanks to a dispensation from the Governor’s environmental agency, in 2013 Det Norske Brenneri was allowed to go out to the bird mountain at Diabas (between Longyearbyen and Pyramiden) to pick scurvy herb.

It was Jan Haugan (pictured) and botanist Rolv Hjelmstad in Urtekilden who were responsible for the harvesting, and ensured that the right plants were brought from Svalbard, where all fauna is protected. 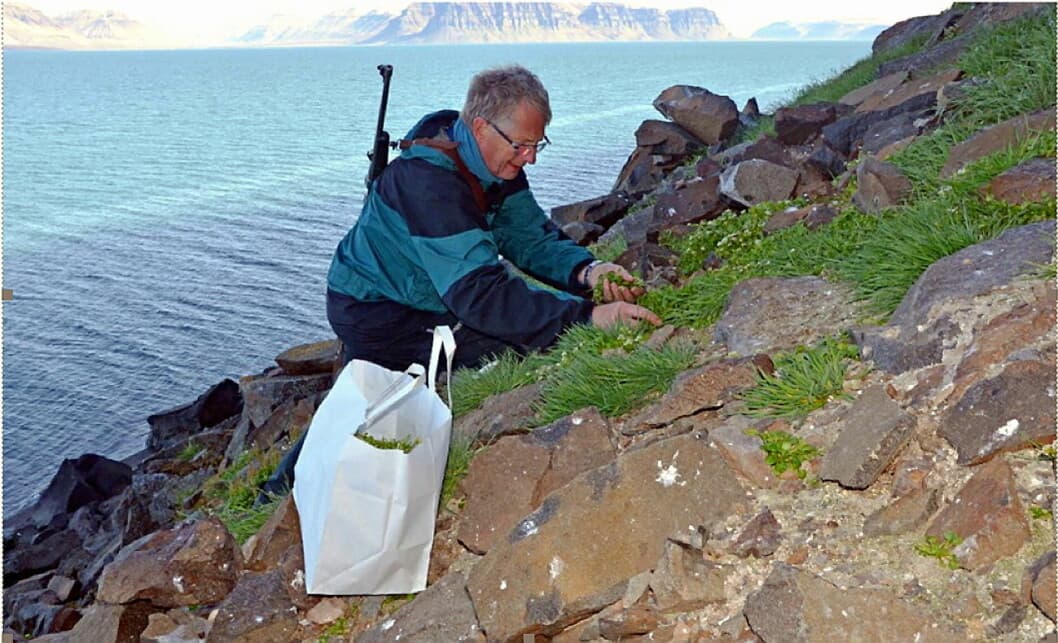 Note: On Svalbard everybody has to carry a rifle when outside to scare off, or in worst cases,shoot, polar bears.

Looking for a job where you get plenty of fresh air and spectacular view while working??
The workplace for the next few months could be here: 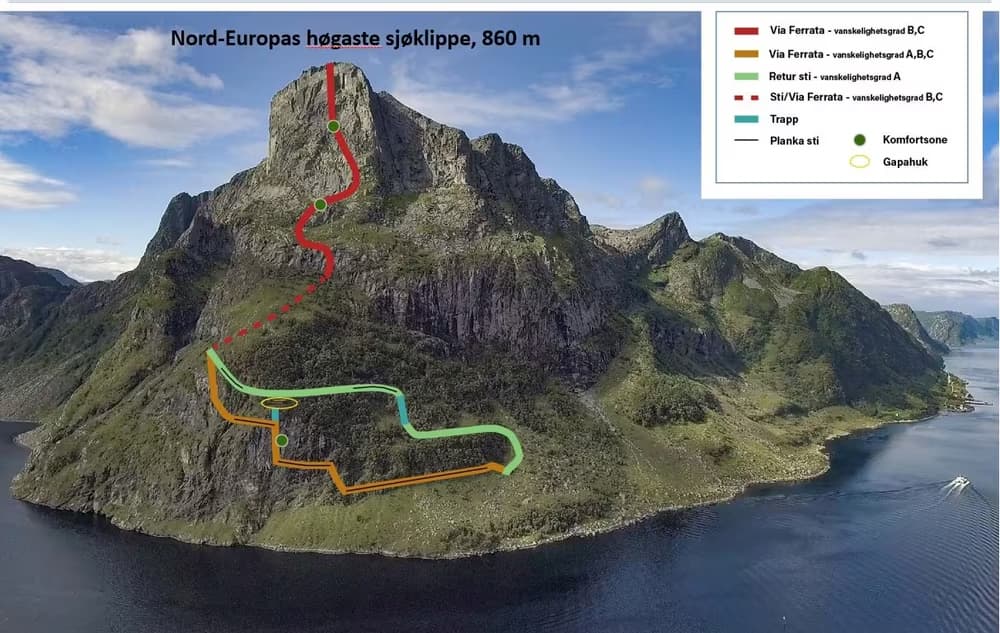 image1000×633 92.8 KB
This is what the entire route of the Via Ferrata Hornelen looks like. PHOTO: IVEST CONSULT 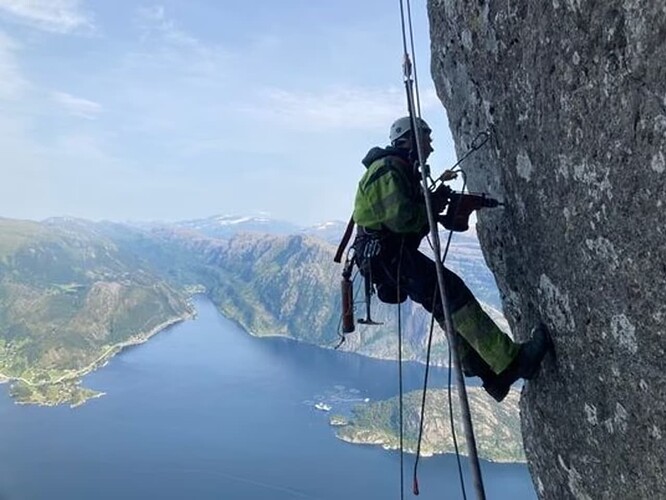 Accommodations are provided near the workplace: 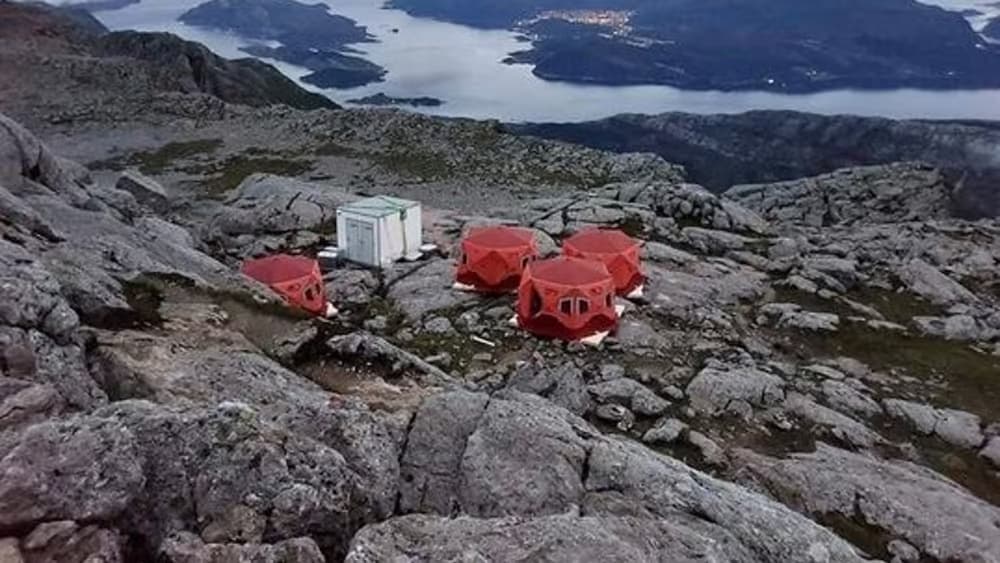 Safe places are arranged along the route if you feel the urge to take short rests while working: 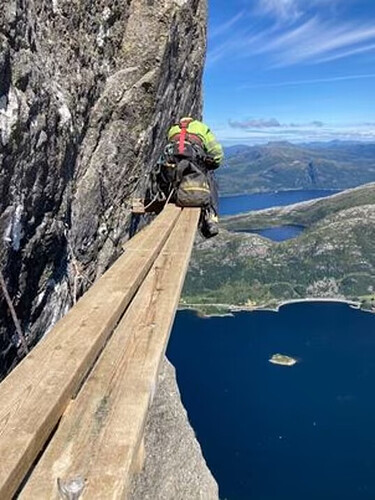 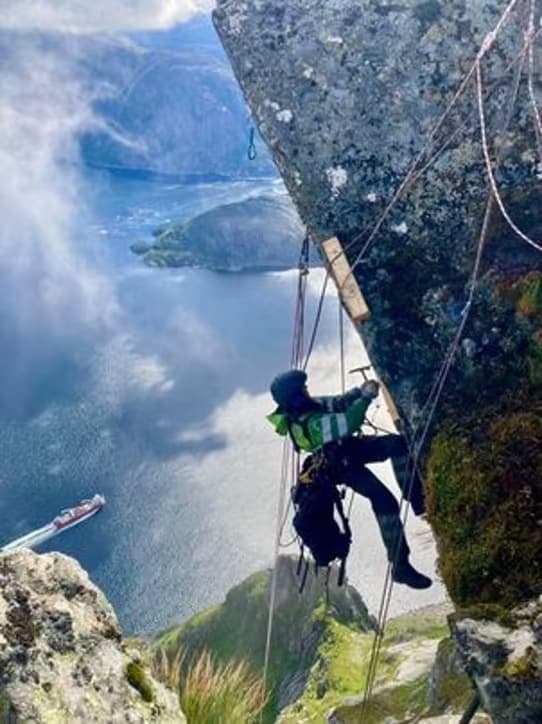 image542×724 51 KB
They may hang high, but they are not particularly sour.
PHOTOS: NORGES BOLTEFOND

Oh sorry, it is too late to apply for job on this particular project. Via Ferrata Hornelen was completed and opened for business this last summer.
But if you would like to try it’ll be open for climbers again this coming summer. 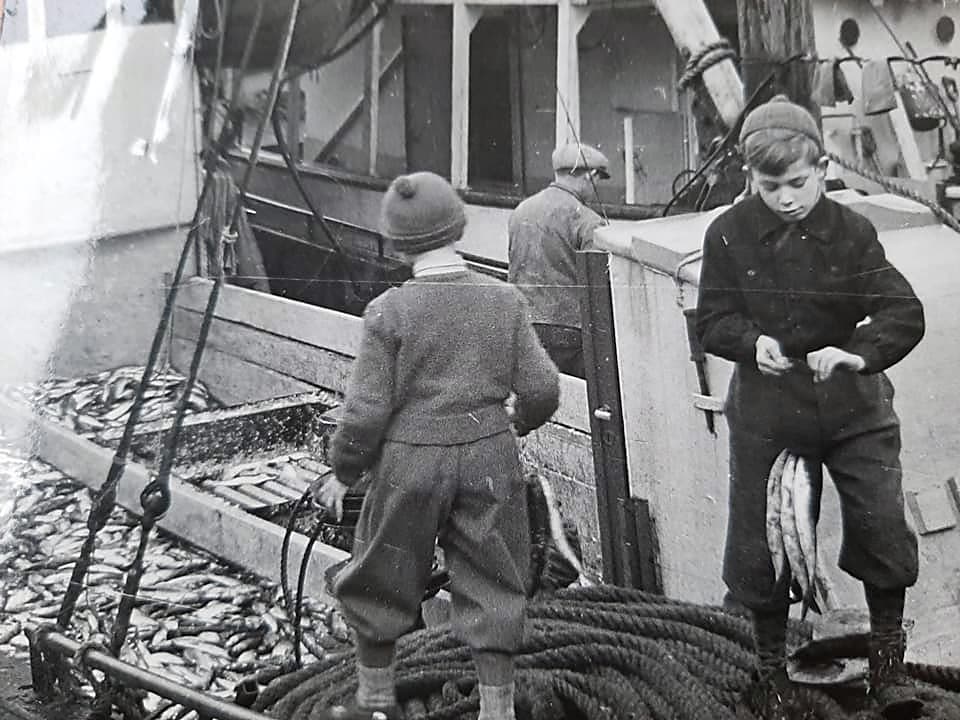 PS> No, I’m not in the picture, but used to do this every winter herring season from the age of 8 -12.

Nice clear and calm afternoon in Ålesund with the temperature hovering around 0C: 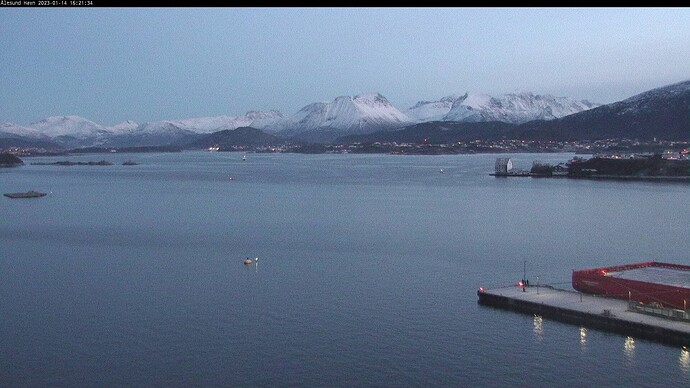 On Friday 20.Jan. at 19.04 hrs. a sound, light and film show will be staged, using the buildings around “Brosundet” as the canvas, telling the story for the next generation of the dramatic night in 1904 when most of the town went up in flames: 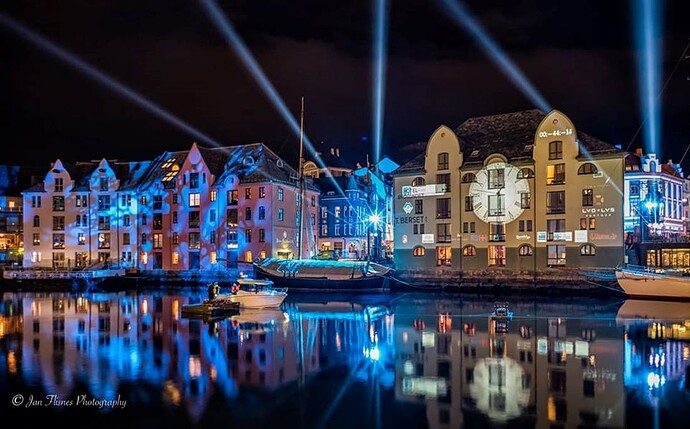 This is what the same area looked like after the fire: 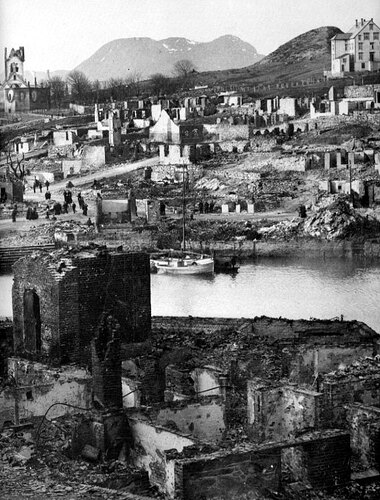 A wider view of the devastations: 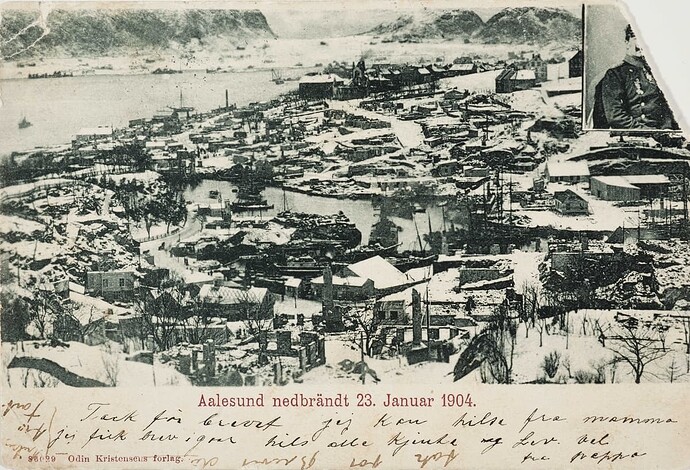 From the Ålesund Fire Brigade’s history:

From 1871, fire preparedness in Ålesund was significantly strengthened. Then a permanent fire brigade was established and they got their own fire station at Lihaugen. Here there was also a 24-hour tower guard who sat and scouted out over the city to look for smoke and fire.
In 1897, Lihaugen was expanded with i.a. stable for the fire horses. Now it was the fire horses who took over the job of pulling the carts.

Until the turn of the century, the number of firefighters increased cautiously. In 1904, there were over 22 permanent employees, 20 call crews and 230 men in the civic fire brigade. During the great City Fire on 23 January 1904, 860 houses burned down, including the fire station at Lihaugen and two so-called spray houses. A provisional fire station was therefore set up at Aspøy old school in Kirkegata. They stayed here until the new fire station in Storgata was completed in 1907. The following year, a so-called secondary fire station was also built in Kirkegata 35. 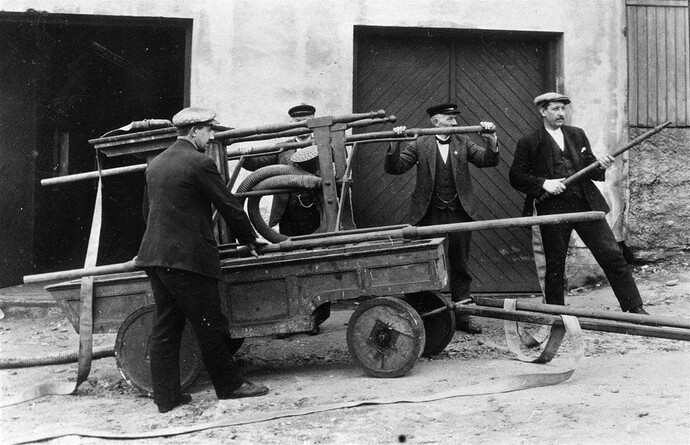 Initially temporary prefabricated barracks were shipped in from Germany to house the people and get some commercial activity started again: 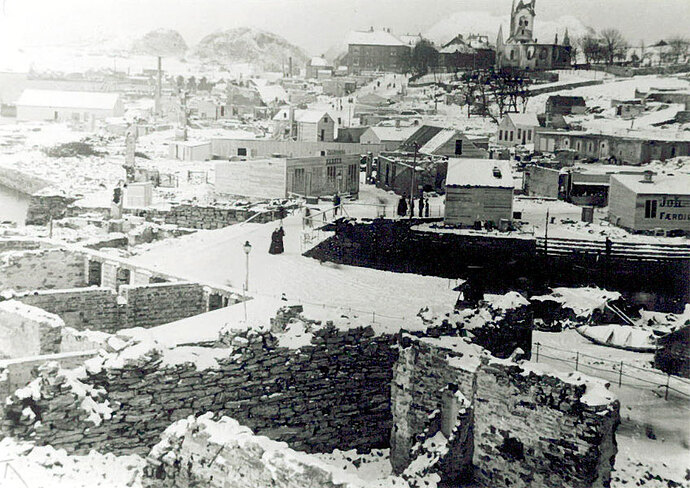 The town was largely restored by 1907, but this time no wooden houses were allowed within the town center. This was thanks in large part to the generosity of the German Kaiser Wilhelm II who had been a regular summer visitor to the Norwegian fjords and Ålesund in the years before the great Ålesund fire. He is still revered here, with one of the main streets named for him.

The area around Brosundet looked much like it do today (top picture) but the use of the buildings have changed from fish processing to shops, offices and hotels: 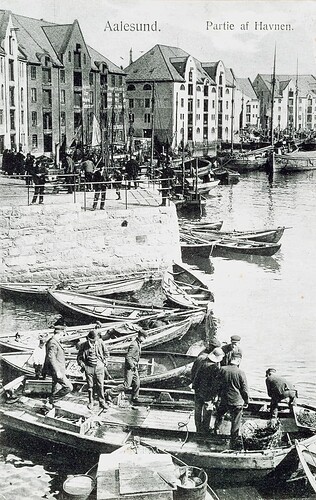 PS> There will also be a “Fire walk” starting from where the fire started (in a Cannery on the South west side of town) and to where it eventually blew itself out, near the then town limit in the east.

One wooden building that survived the fire; 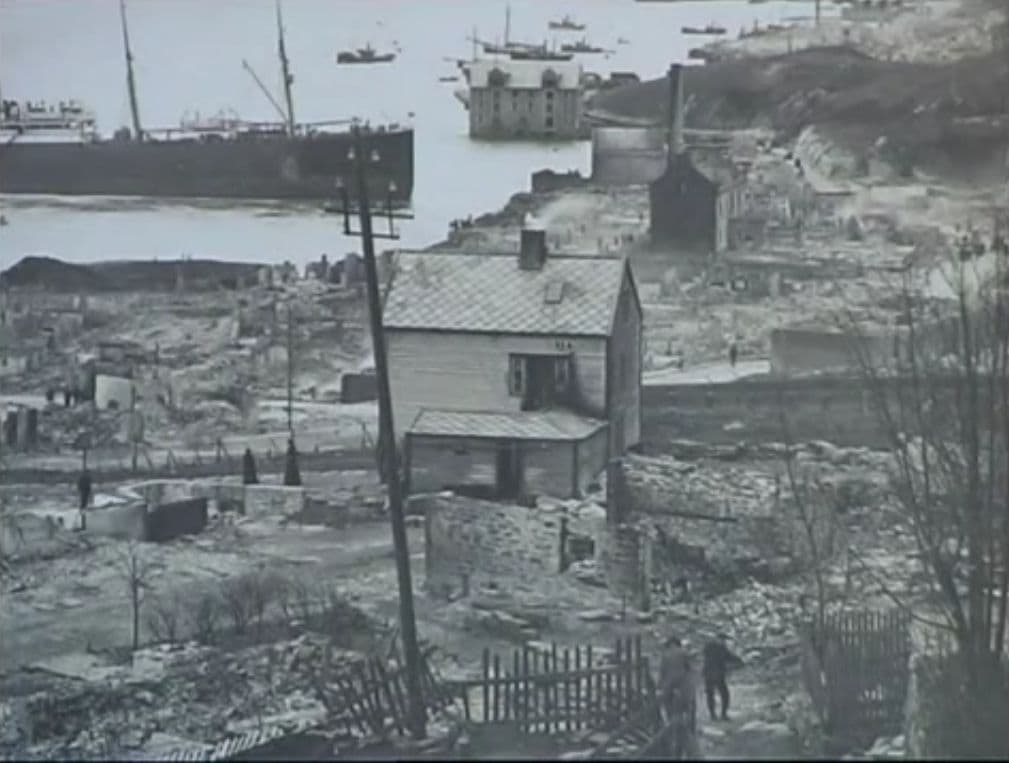 It is now a museum: 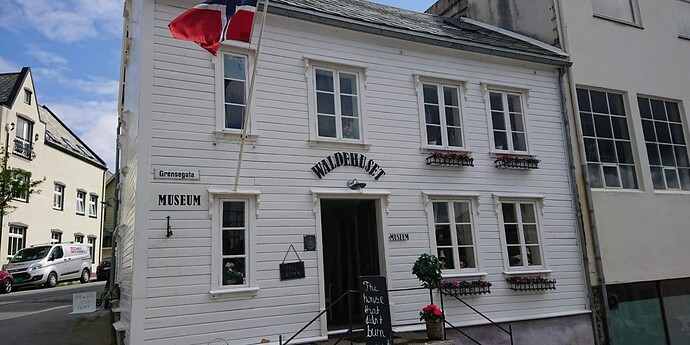 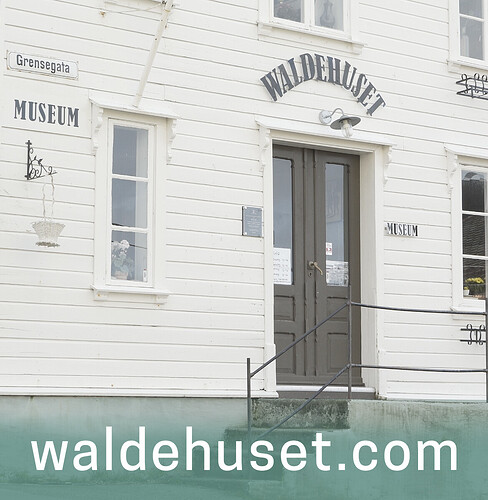 PS> The more likely explenation for the survival is that the owner, who run a milk shop in the house, splashed milk on the walls.

It has been said that “Norwegians are born with skis on their feet”:

But they do take them off some times.

Norway, all you ever need (or want) to know.
Some (not so accurate) Facts about Norway: 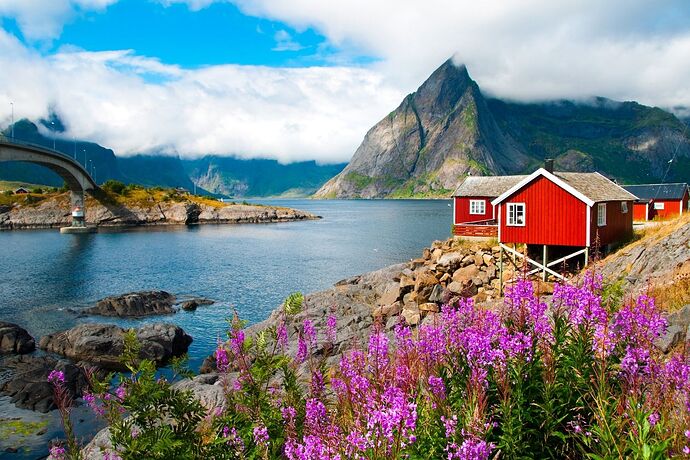 34 Fun Facts About NORWAY You Should Know

Seeking some facts about Norway? Norway happens to be one of the safest and most beautiful countries on earth! It's a fascinating part of the world filled

As seen through the eyes of an American living in Canada 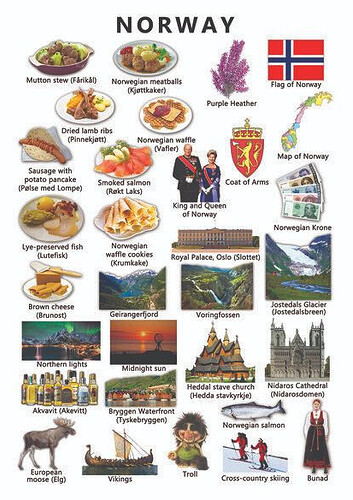 A poem (by another American): 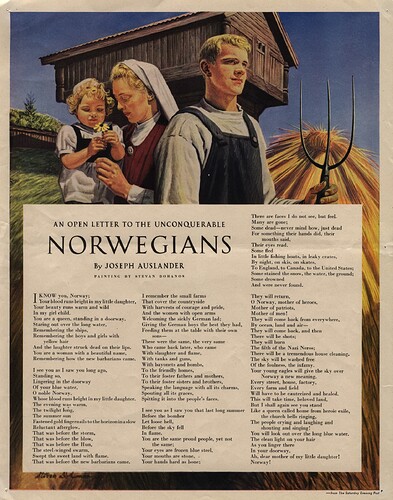 The commemoration of the Great Aalesund Fire is done for this year.
Next year will likely be more elaborate, since it will be 120 years since the fire.

Arve Tore Flem has made a compendium of pictures from the aftermath of the fire: 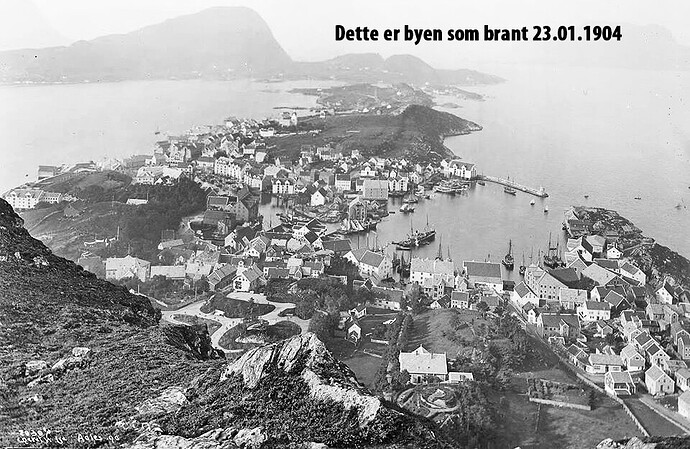 Spring will soon be here (I hope) which is the best time to visit the Norwegian fjords and coast line.
Especially in late April, May and early June, when the snow is still low in the mountains, waterfalls are at their most spectacular, the grass is fresh and green in the fields and the fruit trees are blooming:

It is also the time of year when the contrasts from south to north is most striking.
Come on a trip with Hurtigruten from Bergen to Kirkenes in April and judge for yourself: 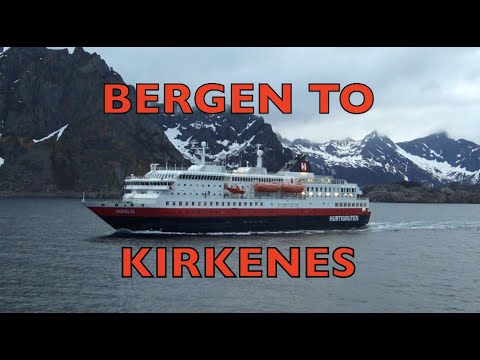 Of course, if your main aim is to see the Northern Lights spring is NOT the best time to visit Norway. (the ‘auroral season’ is September 26 –March 31):

The cruise line’s Northern Lights Promise means that your dreams of seeing the aurora borealis firsthand will come true on your sailing or it will give you a second one for free.

The steps gat gets you from the City Park to the lookout point “Fjellstua” on the “City Mountain” Aksla her in Ålesund has been mentioned before and the view from there is probably one of the most photographed in Norway.

If you haven’t got the opportunity to vist Ålesund, or the stamina to walk the steps, here is a video to let you experience it from the comfort of you easy chair (without silly music or too much commentary):

Its soon that time of year again when the cod comes into Borgundfjorden to spawn.
Several boats are offering fishing trips to catch your own dinner, which you can get the cook in your hotel to prepare for you.

But none are as iconic as the “Storeggen af Aalesund”, a replica fishing boat from the 1800s: 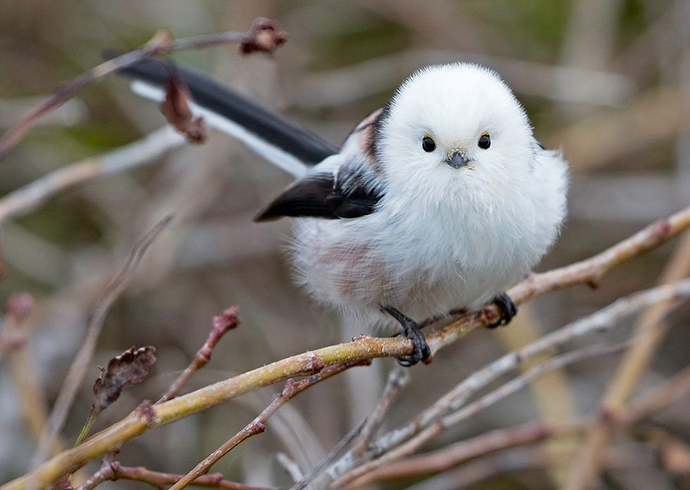 Experience art and culture on the west coast of Norway

It is available for fishing trips in March 2023: 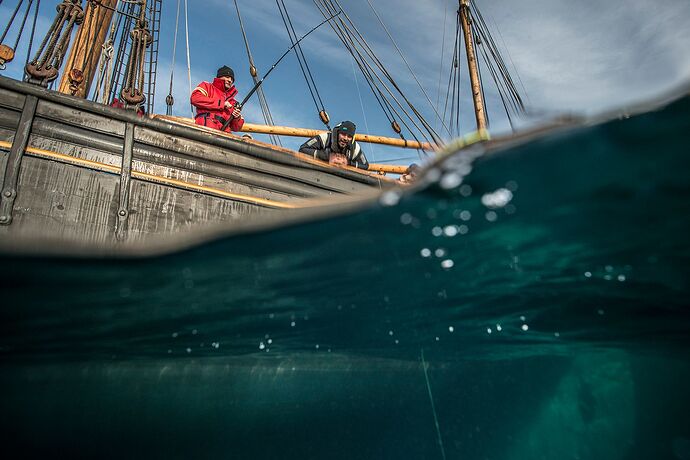