At the same time Norwegian salmon rivers are being invaded by an unwanted species; Pink salmon or humpback salmon, which is a species of anadromous fish in the salmon family. It is the smallest and most abundant of the Pacific salmon.

Must save the wild salmon with an intelligent trap 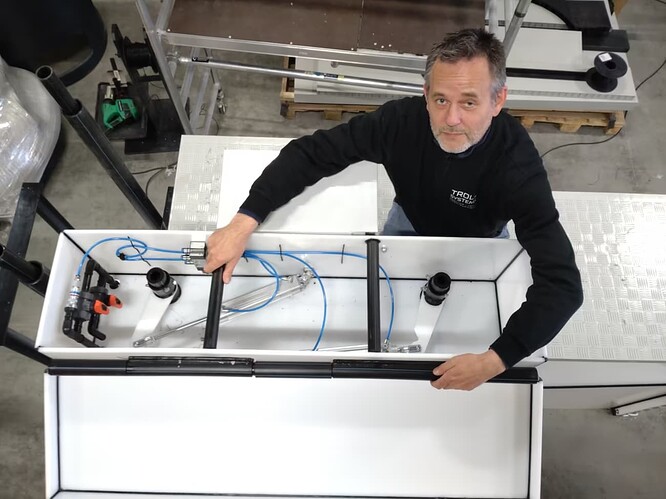 image1300×975 86.2 KB
Rune Rørstad from Ålesund is collaborating with, among others, Huawei on a system that will stop humpback salmon from invading Norwegian salmon rivers.

The Norwegian wild salmon is endangered and under strong pressure from many quarters. One of the new threats is the invasions of the alien species humpback salmon that disrupt wild salmon reproduction: 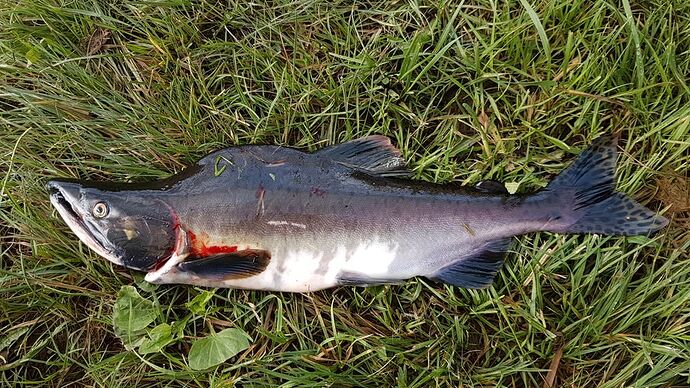 This comes on top of the escaped farmed salmon. Humpback salmon spawn every two years, and river owners and salmon fishermen hold their breath before the 2023 season. It is expected to offer a humpback salmon nightmare in several places.

Rørstad is the leader and largest owner of the company Troll Systems AS. Their job is to create the infrastructure itself.
Huawei is responsible for the camera technology, while a third company, Simula consulting, is developing the artificial intelligence.

Furthermore, an effort is also needed to operate the “fishing trap” during the spawning season.

From Sunday 26 June, the company will in a couple of days drive equipment from Bodø, to Berlevåg, which is located in the far north of Finnmark. There the scheme will be tried out on farmed salmon.

From smp.no today (behind paywall) Google translation with a little help

PS> Maybe useful to stop invasive species, like Atlantic farmed salmon, in US rivers?
Oh forgot, that probably wouldn’t be allowed if Huawei equipment is involved.

Something that probably is more interesting to most: 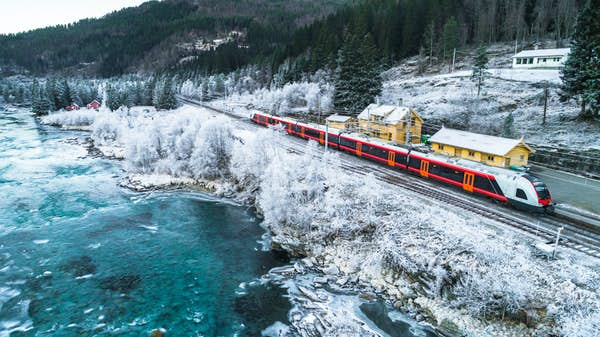 The Bergensbanen, or Bergen Line, is a wonder of the world as well as a matter-of-fact way of linking Norway’s two most important cities. 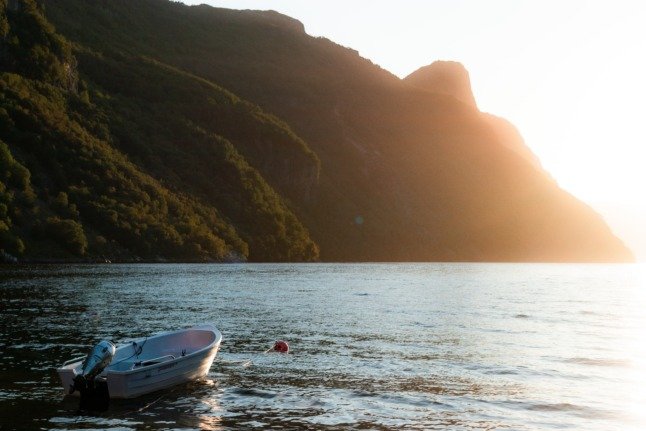 Adapting to life in Norway can take some getting used to and requires a generous pinch of patience and perseverance. With an honest effort, you'll get there, but even then, some things will leave you scratching your head. 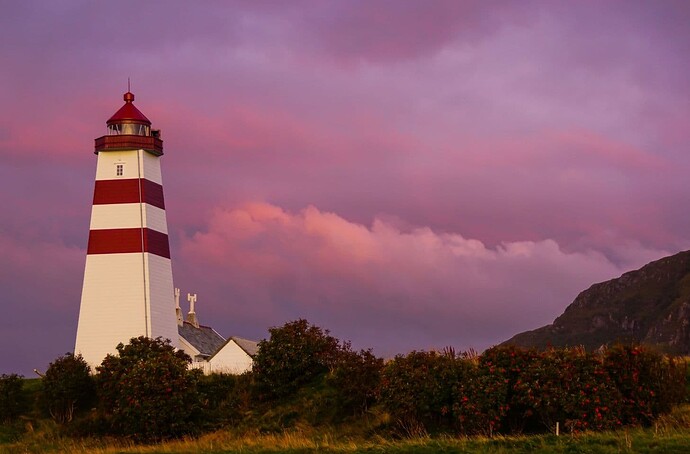 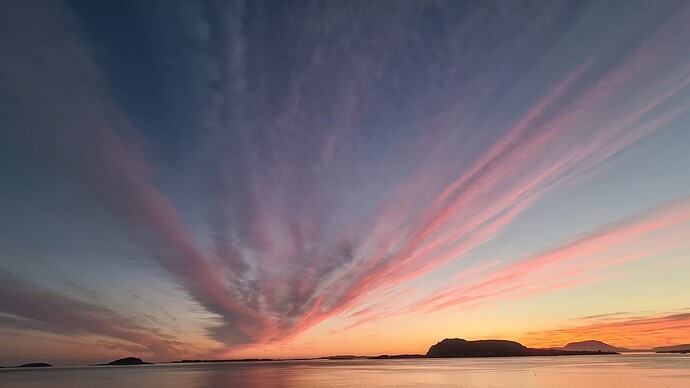 One of those ships would have been ideal for shipping freshwater to the gulf states . The headwaters of our fiords are freshwater so the ship just needed to ballast with cheap bunkers at the other end.

Unfortunately the gulf state found a different solution; in stead of flaring the associated gas from the oil production they gathered it, piped it to the coast and used it to evaporate seawater, thus making cheap fresh water without being dependent on anybody else.

BTW; less GHG emission, since they didn’t have to ship water over long distances in fuel burning VLCCs.

Actually there were plans at the time of the tanker crisis to ship fresh water from Norway to Southern Europe/North Africa/Middle East, using VLCCs.

The plans to export water from Norway have been revived recently:
No, not the expensive bottle glacier water from Voss, or ice cubes cut from glaciers, sold at ridiculous prices at exclusive bars in NYC, Las Vegas and Dubai etc.

The water would first go through a turbine to make cheap renewable electricity for households and industry:

PS> Some of that energy could be used to produce “Green Hydrogen” as fuel for the VLCCs.

The tankers to be moored, loaded (and refueled?) near the power stations, with a minimum of infrastructure required, as there are deep water close to shore and all along the fjords: 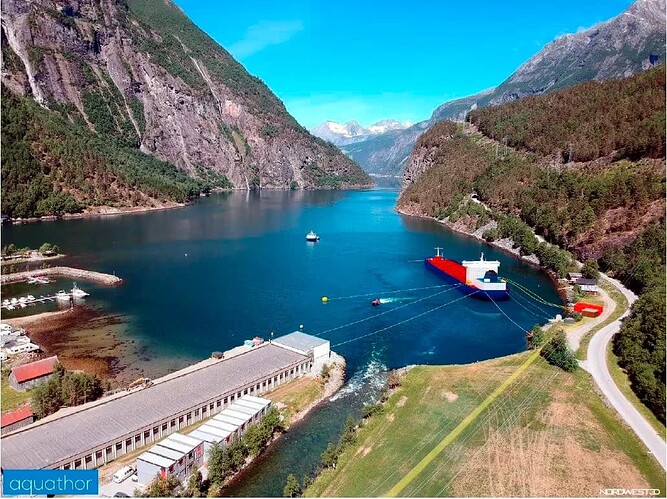 The water sources are from melting snow and glaciers, collected in reservoirs high in the mountains and piped (or in narrow tunnels) to power stations near the fjords and is “discarded”.

It is clean, so no expensive rinsing process needed. (Silt filtering is done before the turbines)
The water is still potable after passing through turbines and being transported in clean coated tanks over long distances.

The hydro station presently supplying an aluminium smelter is fed from a lake formed from melt water like your Norwegian hydro. The hydro station is inside the mountain 600 metres below the lake. The turbine hall is cut out of granite and the tail races exit in a fiord very much the same as your picture but there are no buildings or people there. 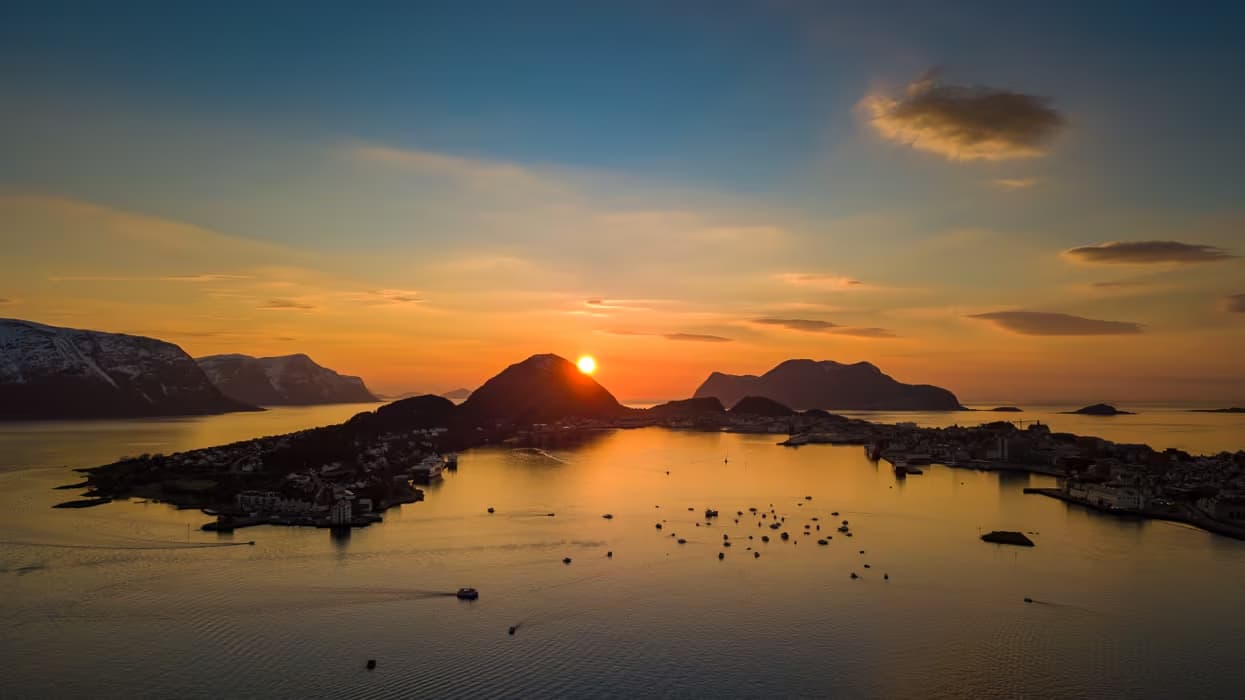 This beautiful photo was taken by Kenneth Hjelle in early March and shows a number of boats fishing for cod during the Borgundfjord fishery as he sun sets in the west, between Sukkertoppen and Godøya.

Norway has a lot of hydro power stations and usually a lot of rain and snow to fill the reservoirs that drives the turbines, creating cheap electricity for the consumers and for export to the rest of Europe.

This year has not been a normal year, however. The South and East of Norway has been dry, with little snow in the mountains, causing the reservoirs to be at a very low level: 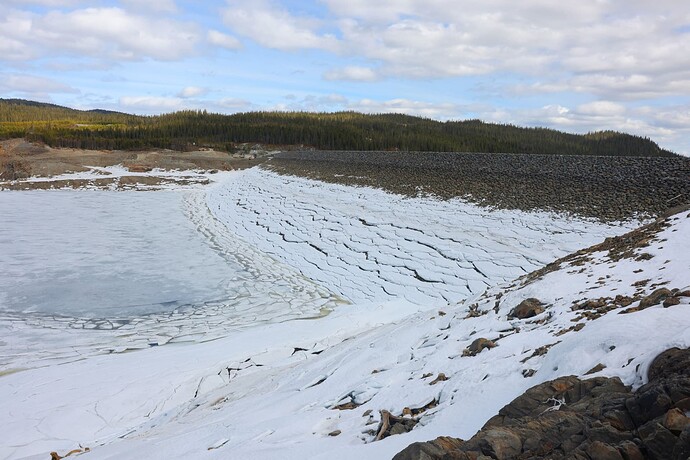 image1920×1280 237 KB
Little precipitation and little snow in the mountains means that the water level in Dokkfløydammen in Nordre Land is very low.
Photo: Ørn E. Borgen / NTB Photo
Consequently the price to consumers where up to NOK 2.80 per kwh

At the same time, due to large snowfall in the winter: 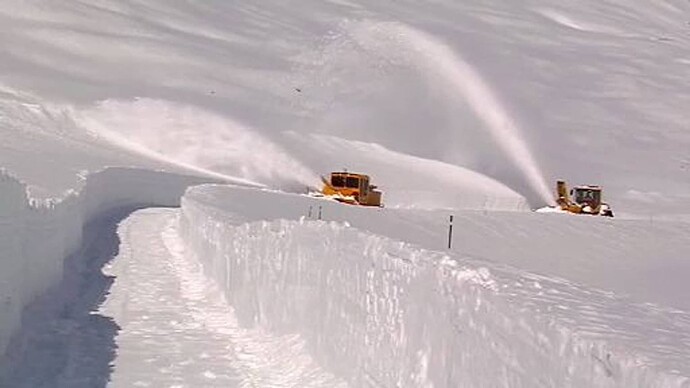 image1920×1080 71.2 KB
And due to the warm weather now, rapid melting cause the the reservoirs to overflow here in the North West of Norway: 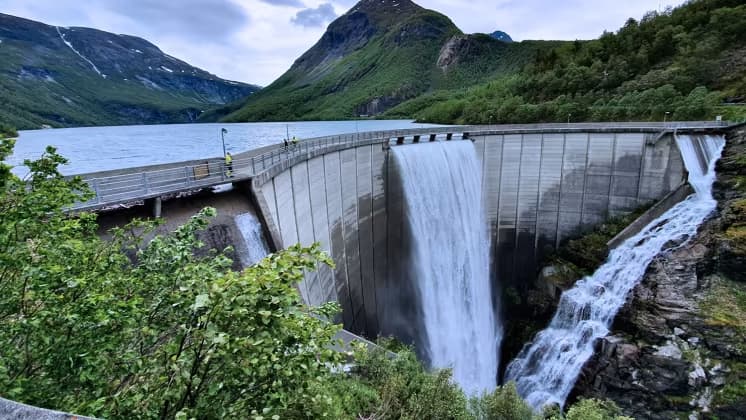 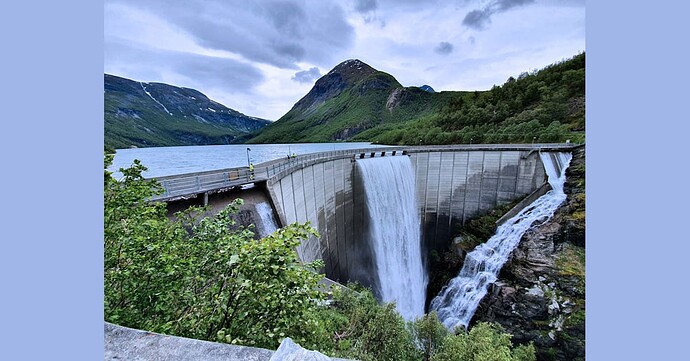 The price to consumers in this part of Norway was as low as NOK 0.03/kwh a few days ago.

Wants to experience the Midnight Sun without actually having to travel north of the arctic circle?
Here is your possibility do do so from the comfort of your easy chair

Live webcam streaming 24/7 from Skarsvåg, North Cape in Norway.
The Northern most fishing village in the World. 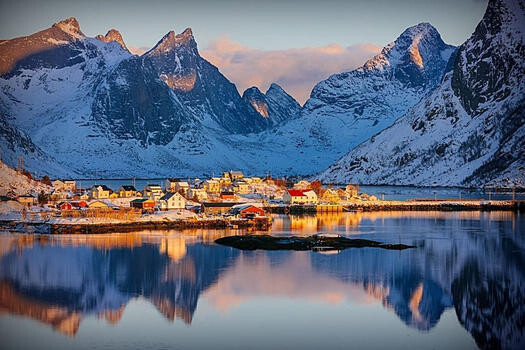 Reine in Lofoten Islands. A spot of spring sunlight 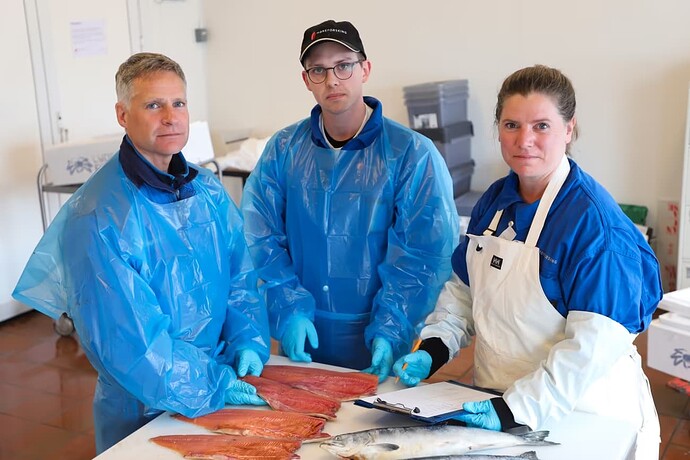 Humpback salmon are known to be an environmental threat because they harm normal salmon fishing. Since the species is quite fragile, it is also not very popular in the food industry.
Now Møreforsking will still try to exploit the unwanted species commercially.

At the beginning of September, there will be a workshop where the researchers will work out which gear and fishing methods they will continue to research. In 2023, test fishing will be carried out. The research is funded by the seafood industry itself through the Fisheries and Aquaculture industry’s research funding and is led by Møreforsking.

Here is an advert from a car dealer that offer a simple solution (according to them) to ease the problem: 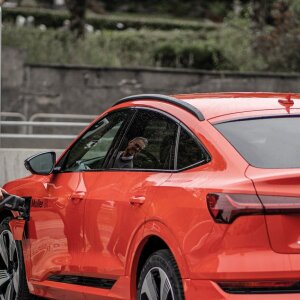 On July 22, 1941 , the Germans took 70 fathers from Ålesund and Sunnmøre hostage and sent them to the Grini concentration camp. 48 of these were held captive in the Masonic lodge until the deportation.

These were fathers of young people who had gone to England to join the free Norwegian forces. With this action, the Nazi occupiers made the first serious attempt to stop the English trade, which was very large from the warts district.

The action provoked outrage among the city’s population. They went from house to house in the street to stop the transport of prisoners through the city to the prison ship (“Sykkylvsfjord” for the occasion), but the people had to give way to bayonets and rifles.

This was the largest demonstration against the occupying forces in Norway during the occupation. At the end, people stood close together along Skansekaia and the pier on Molja while they sang the national anthem when Sykkylvsfjord slid out of Skateflua along the harbor and out Moljegapet.

This unique incident in the city was one of many other illegal actions that the occupiers took care of were not mentioned in the newspapers at the time. 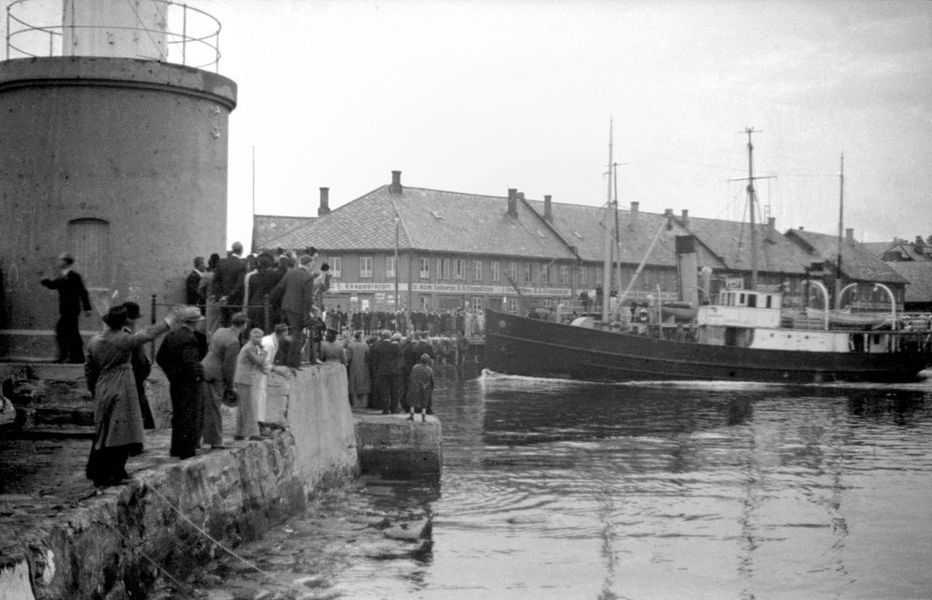 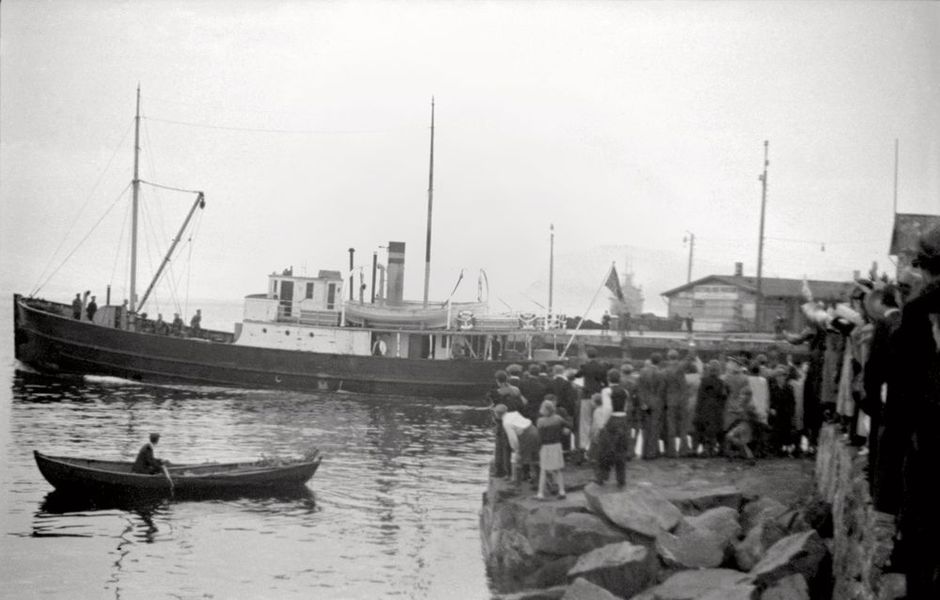 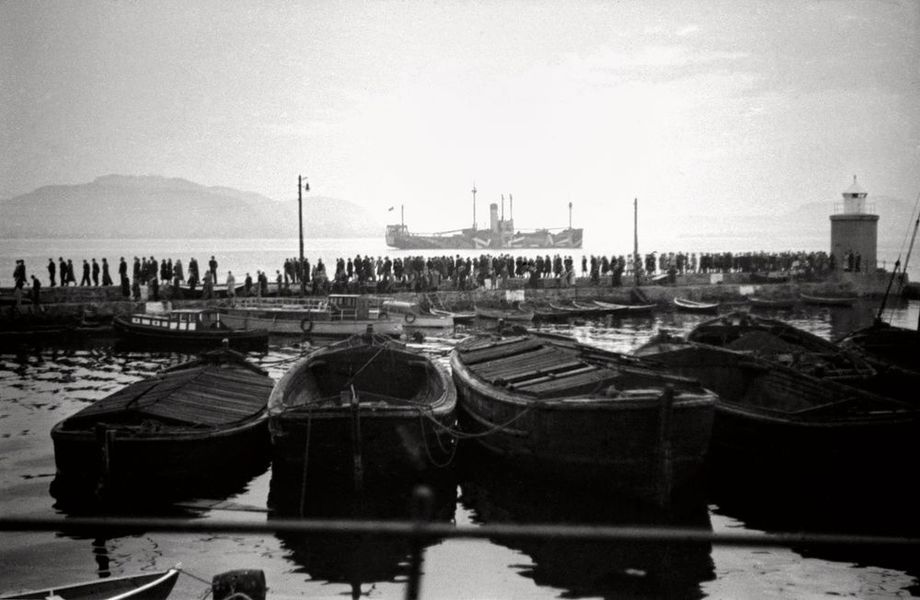 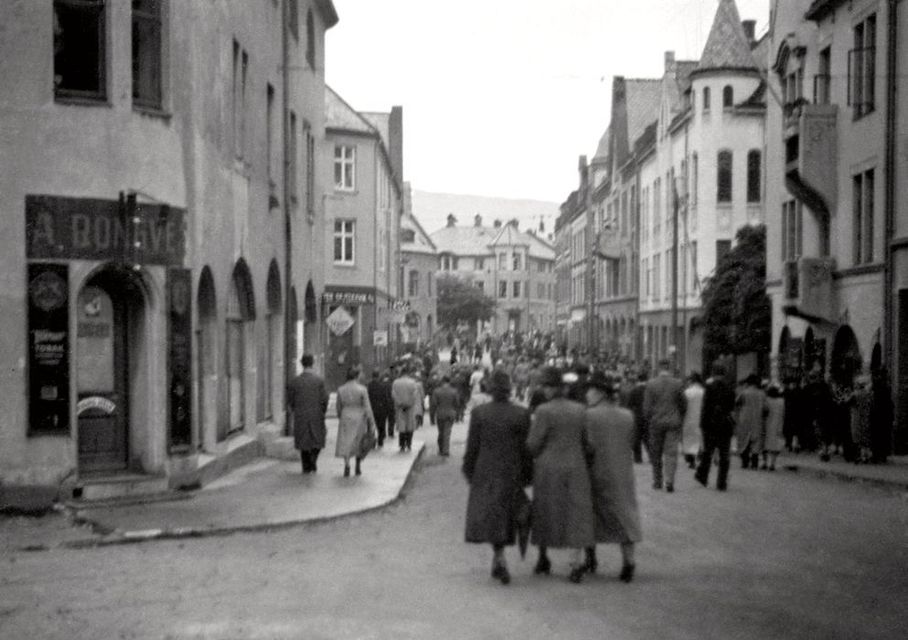 PS> Ålesund was known as “Little London” during WWII due to the traffic of people to Shetland, with weapons, communication equipment, operators and saboteres on the return voyages.
Here is one of the fishing boats that was used for this purpose: 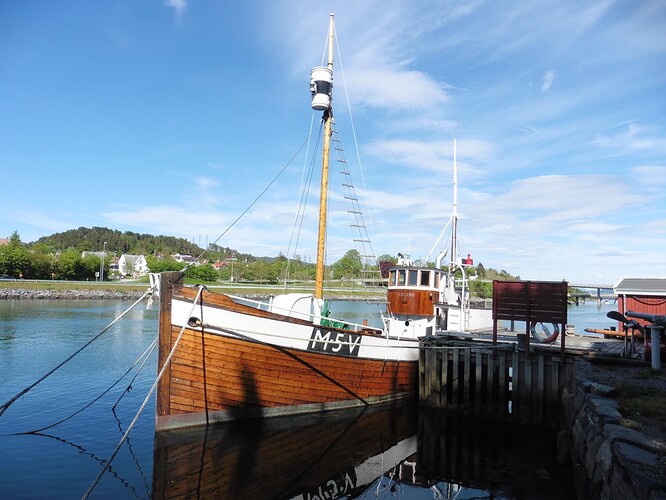 P10507301920×1440 214 KB
She is now preserved and belong to Sunnmøre Museum She is making trips to Shetland most years for the commemoration there: 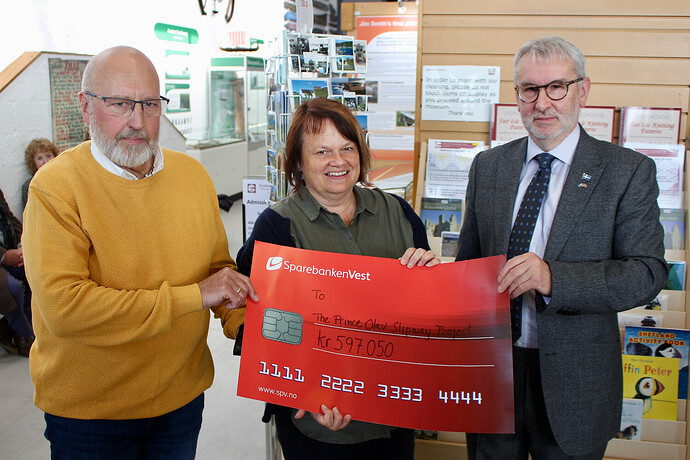 Fjærland, the “Book town” of Norway, with less than 300 inhabitants and 10 used book stores: 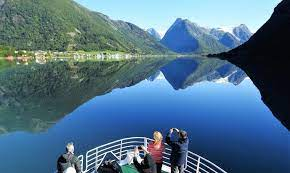 Fjærland seen from the ferry on a calm and clear day. 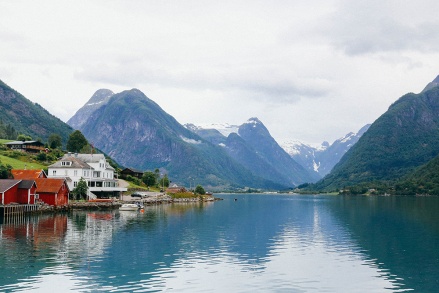 Often the most magical places are a little tricky to reach. But if you make that extra connection, wind a little deeper into lesser-known terrain, the rewards can be significant: the feeling of dis… 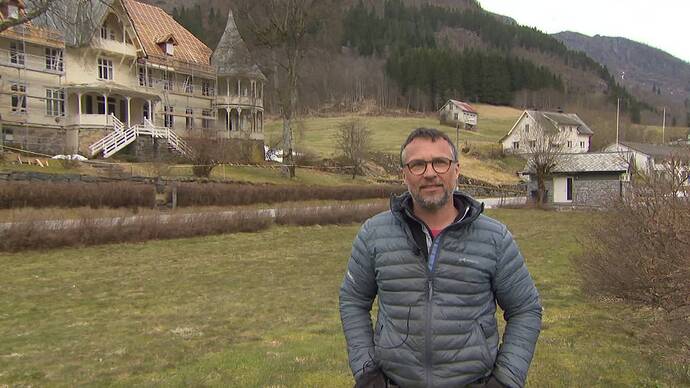 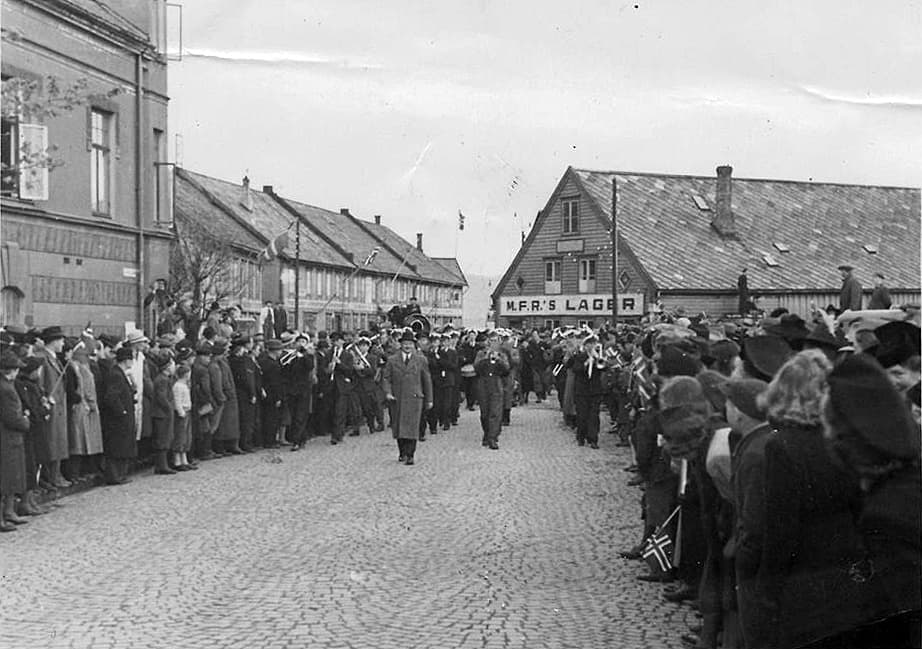 Cruise boat passengers transported down from Nesaksla on special stretchers

An adult woman was transported down from Nesaksla (708 m. asl) on Wednesday by the Rauma Red Cross Aid Corps after sustaining a minor injury. The crews used a wheeled stretcher on the rescue mission.The woman must have fallen or tripped on the stairs between Andersmyra and the summit, and either sprained or broke her ankle. Four volunteer members of the Rauma Red Cross Aid Corps were called to get the patient down from the mountain.
It was considered using a helicopter, but the AMK central decided that it was not necessary because the damage was not considered very serious, says auxiliary corps leader Øystein Valde.
We spent an hour and fifty minutes up and down, so it went quite quickly, said Sivert Hole after the patient had been sent on by ambulance to the hospital in Molde for further examination: 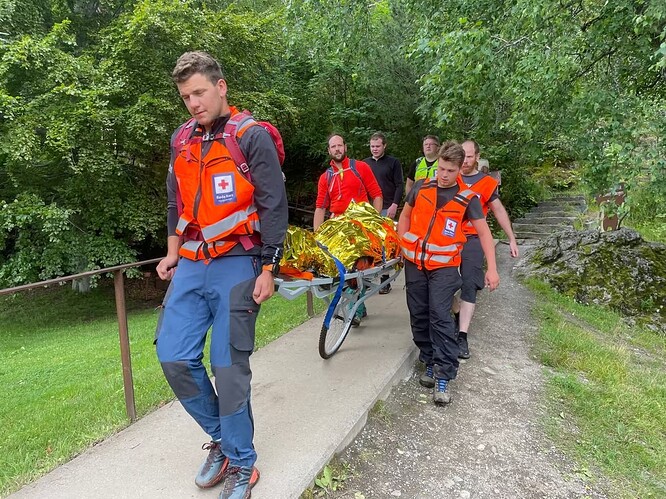 The stretcher used in the rescue operation is specially designed for use in demanding and steep terrain. It has a large bicycle wheel underneath, and is equipped with brakes, and the crews in the auxiliary corps have used it in several demanding operations.
We decided to acquire the stretcher after we had to pick up a person at Puttbua in the heart of Brøstdalen several years ago. We then started to carry the patient down, but soon realized that we were going to wear ourselves out. So then we turned around and went back, and made sure that the patient instead had a comfortable night until he was picked up by helicopter the next day,

The same stretcher has also been used in previous campaigns at Nesaksla.
It is quite steep terrain, also some steep hills. But it went just fine, it’s just a matter of taking it easy, one step at a time. Without the stretcher with wheels, it would have been a much more demanding operation, states the auxiliary corps commander.
A big advantage of using the Red Cross for such simpler rescues is that we are far cheaper than a helicopter, says Øystein Valde with a satisfied smile. 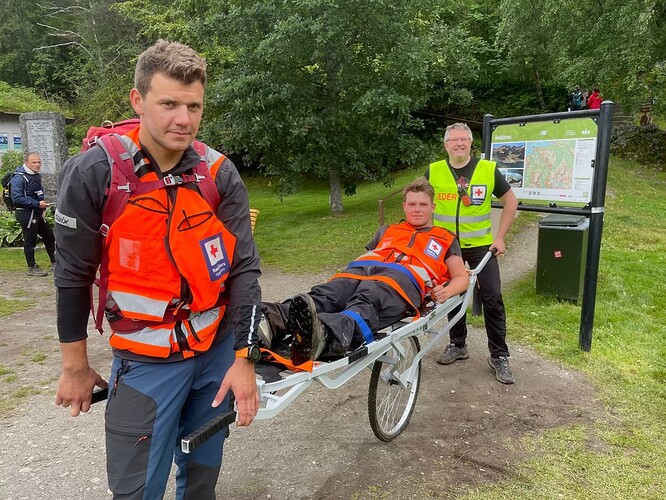 image1920×1440 433 KB
Campaign participant Martin Antonsen was able to take a well-deserved rest on the special stretcher in honor of the photographer, while stretcher drivers Sivert Hole and Øystein Valde demonstrate its use. PHOTOs: KJETIL SVANEMYR 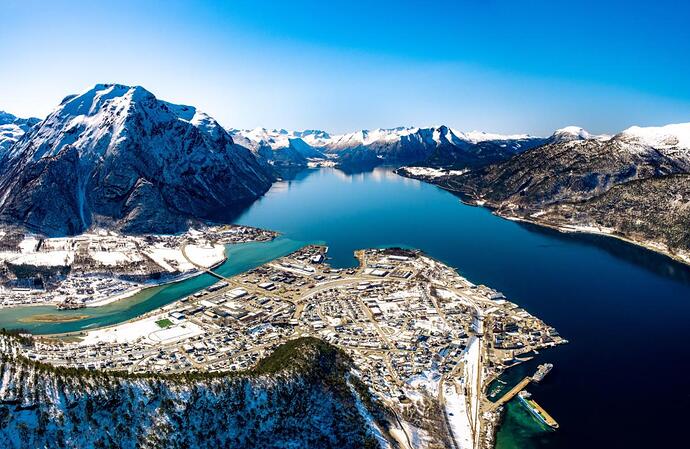 It's classified as a moderate hike, however the last part is quite steep - but manageable. When you reach about 430 masl the trail steepens into stone steps, where the path is made durable thanks to wonderful pieces of stone construction works by...

The Norwegian police is not normally armed, but they can sing:

Seat with a view: 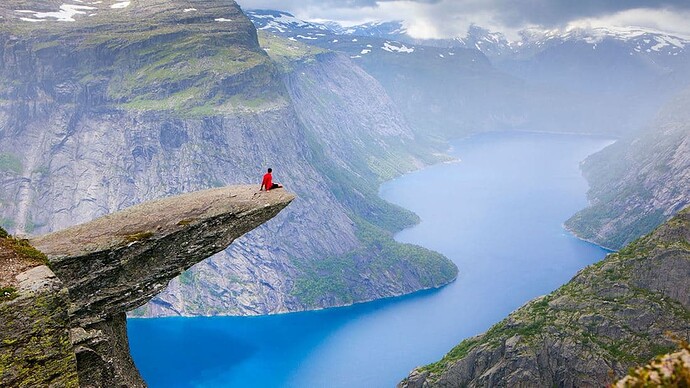