DNV’s Pathway To Net Zero Emissions: Zero emissions by 2050 is not enough for...

This quote is from your linked article.

“ Even with very large investments required, particularly in the short term, (cumulatively USD 55trn in renewables and USD 35trn in grids over 30 years) the additional costs of reaching 1.5°C are less than 1% of global GDP the next 30 years.”

It seems you advocate spending $trillions now to prevent $trillions of future loss to the global GDP (1% in 30 years from the article).

That simple sum is wrong and the logic is fatally flawed. If we let the global GDP grow naturally now we will all be far richer in the future and the global GDP will be far larger than the 1% which we have to now find from far more restricted resources today.

So in thirty years the global GDP might suffer from the supposed horrendous effects of global warming but if we do nothing, we’d still be richer. Or to put it the other way, GDP might grow 30% in 30 years if we do nothing and suffer the consequences of our profligacy, but 31% if we impoverish ourselves now in the vague hope that our efforts will succeed in stopping the globe warming a poofteenth of a degree.

P.S. We Aussies consider the correct abbreviation of a plural (mathematics) requires the plural abbreviation (maths).

P.P.P.S. This (long) podcast better explains my attempt at the economics maths. Note O’Neill describes himself as a Marxist and Lomborg says global warming is a problem but both are far more sensible than any of the myriads of people flocking to COP.

‎The Brendan O'Neill Show: The madness of Net Zero, with Bjorn Lomborg on...

P.P.P.P.S. If we spend $1 million per minute, it would take over 4000 years to spend the sum $90 trillion mentioned in the first quote. Better start soon. Please check my maths.

Just started to see a few articles that solar panels are heating the climate.
If you put your hand on one you know a huge install makes the area very hot
I guess windmills slow the wind so cooling effect reduced as well.
I’ll just email Greta and get her take on it.

I’ll just email Greta and get her take on it.

Oh the horror!!! A tiny Swedish teenage girl with Auberges dear to speak up in big forums. She MAY even get somebody to do something!!

Enough to scare the sh*t out of grown men worldwide. So scared that she even need police protection:

Thousands of activists arrive in Glasgow to make their climate change concerns known.

Oh wait, that was protection from fans and followers that “walked thousands of miles” to join her in Glasgow. She is so small and fragile that she may be crushed by her fans. (you may hope)

There is even a documentary made about this “enemy #1 of the climate deniers”:

What is it they are afraid of? Being upstaged by a teenage girl??

I see you are a big fan and avid follower of the Ecobrat.

I agree with her on one of her speeches. All the politicians’ talk is just “Blah, blah, blah” as they do very little of practical use to ‘save the world’ … as they destroy it. But that also applies to St Greta, the doom goblin; she’s just. “Blah, blah, blah” and very popular in your neck of the woods … for being popular.

very popular in your neck of the woods …

She has obviously made an impression down under as well.
Enough to have the PM worried that Aussie children may get idea that is “not good for them”: 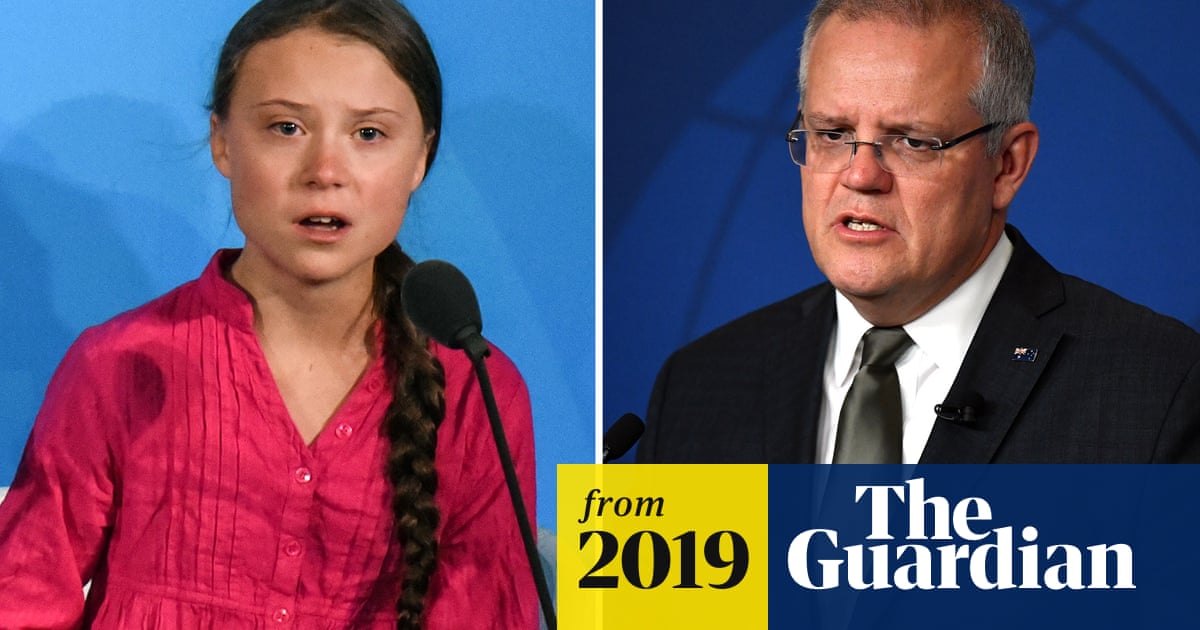 Morrison responds to Greta Thunberg by warning children against 'needless'...

They may even start demanding that he does something, sometime soon.
Or even worse, they may vote Labour when they grow up.

Why don’t you comment on my first response to your original post? That’s what this thread is all about, isn’t it?

But just for your records, don’t believe a word The Guardian says about anything (it’s a Leftist rag), and Our Dear Prime Minister will follow any opinion poll anywhere it takes him. He bends to them like a feather in the breeze. He has no core values, not a conservative bone in his body, if there are any bones at all - there’s no sign of a backbone for a start - even though he’s nominally on that side of politics. He did some good work - he stopped the boats of asylum seekers as the relevant minister - but only under strict direction from our best recent PM, Tony Abbott - who he then stabbed in the back, and then stabbed the next PM as well. He’s promised net zero by 2050 without a clue in the world how he will get there. He won’t have to of course. He won’t get my vote again.

Or even worse, they may vote Labour when they grow up.

There’s not a cigarette paper’s difference between our two major parties. They are both drifting further left in search of votes from the zombies spewing out of our universities and educational institutions, and infesting the worlds of big business, banking, law, media and ‘the establishment’.

Finally, the party you mention is spelled ‘Labor’ (a more American way) not "Labour’ (correct English) indicating that Lefites couldn’t spell very well and never really decided which way to spell it until someone printed ‘Labor’ on some party conference papers and it stuck. There was a time when Labor was actually sensible, supported business and prosperity as a means of good working conditions for the workers, sensible defence, foreign affairs and western civilisational freedoms. Not any more. A party of inner city elites with utter disdain for workers.

zombies spewing out of our universities and educational institutions, and infesting the worlds

Asking rhetorically, why is it that all repressive, totalitarian, autocratic regimes and their followers hate and fear education? Why do they work so hard at silencing discussion and blaming intellectuals for all of their greatest fears? Could it be because they rely on stupid people to blindly follow them into the inevitable oblivion that results from people like themselves assuming positions of power?

The 1930s were not that long ago, is memory loss or simply ignorance of history a component of the authoritarian mentality?

Back to reality
once the current “print money debt fueled fake economy” goes back to reality we might find some different priorities.

At a guess I would estimate 50% of graduates are now working for bling digital transformation companies that the havnt and will never make any money.

Got a buddy working for a major global miner in the bling “de carbonizing” department, they sold all the ships and charter them back, job done, huge bonus.

I’m not sure what your point is.

I certainly support a good education for everyone but I am saying that’s not evident in today’s schools.

Are you suggesting that today’s universities are places of open-minded debate, welcoming all points of view and discussing them reasonably? Fat chance. Students at woke Oberlin College were horrified to learn a male plumber had been let into their (female and trans) rooms to service the heating. They had felt invaded, assaulted by his presence and, horror of horrors, he was probably CIS gendered. Look it up. Does that sound like a university that values all perspectives? Open minded? Sane?

We have schoolchildren in tears and terrified because they’ve been told the world is going to end, frying them all to a crisp instead of learning the basics. We have schools spouting that the histories of our great western nations have been nothing but a miserable, shameful litany of dispossession, oppression, slavery, theft and cruelty.

Who controls the humanities departments of universities? Who teaches this so-called history? Do they educate or indoctrinate? And as for the authoritarians, those are the lovers of big government with big powers.

I was pointing out that we are running in a false economy at the moment and things will change when it resets.

I was replying to Steamer. I got your point ok, thanks.

Some more data on Net Zero.

"US President Joe Biden, for example, has set the goal of creating “a carbon pollution-free power sector by 2035 and a net-zero emissions economy by no later than 2050”. Most rich nations’ governments have formulated similar ambitions.

Unfortunately, that target will be prohibitively expensive. A new study in the renowned journal ­Nature shows the cost of 95 per cent reduction by 2050 – almost Biden’s net-zero – would cost 11.9 per cent of GDP, or more than $US11,000 present-day dollars for each American every year." Bjorn Lomborg.

Notice the dramatic effect of each and every Conference of the Parties in increasing CO2.

According to Canadian scientist Vaclav Smil, in the 30 years of climate activism since 1992, the world has moved from getting 87 per cent of its energy from fossil fuels to 83 per cent. This rate of progress obviously means it will be super easy to get to net zero … sometime after 2200, perhaps 2300. I can’t wait!

Nuclear was is and will be the better choice for power
They even buy uranium to power them yet its cheaper power than the free from the sun and wind?