not necessarily maritime but worthy of mentioning because it means foreign ships will likely export US produced LNG soon. This ASSHOLE I am sure is thoroughly behind that one!

CEO Charif Souki’s 2013 compensation was one of the highest in corporate America, and more than five times that of Exxon Mobil Corp. CEO Rex Tillerson, who runs the world’s largest publicly traded energy company with a profit of $32.6 billion last year, according to summary compensation tables published in regulatory filings.

Cheniere, based in Houston, is set to become the first U.S. company to export liquefied natural gas produced from the U.S. shale boom. Shares in the company have doubled over the past year, performing about five times better than the Standard & Poor’s 500 Index, and closed at $55.55 today.

Is this SCUM SUCKING SLUG even a US citizen?

Lolz we were discussing that onboard this AM. No profit and the bozo makes hundreds of millions! Sounds like a scam huh, how the hell does that work? The man probably pays no taxes either! Sign me up!

It’s all about the stock. Nobody expected that stock to skyrocket like it did, so they included butt-loads of stock in their package. Actual monies is probably more like $8-10 million.

[QUOTE=txwooley;136679]It’s all about the stock. Nobody expected that stock to skyrocket like it did, so they included butt-loads of stock in their package. Actual monies is probably more like $8-10 million.[/QUOTE]

Wow, Someone who can read thru the media slant. Good on you, txwooly!!!

By the way, I do believe there is another company gearing up to take on the thing they are calling LNG export.

I always remember what my brother ( retired investment banker) used to tell me ‘JR Ewing couldn’t cut it in the real world of oil n gas, not ruthless enough’.
and
’anyone that thinks a public company is run for the benefit of the public shareholders is in dream land’

[QUOTE=c.captain;136657]not necessarily maritime but worthy of mentioning because it means foreign ships will likely export US produced LNG soon. This ASSHOLE I am sure is thoroughly behind that one!

Is this SCUM SUCKING SLUG even a US citizen?[/QUOTE]

He is one of the people written up in the book [U]The Frackers[/U], which has been mentioned on this forum. As I recall, he was born a Christian in Lebanon, and his family left. He has been successful raising money because he is fluent in multiple languages, including Arabic.

The book is an excellent read.

Cheniere to ‘reassess’ bonus plan for its CEO

Cheniere Energy Inc., the natural gas export business that compensated its chief executive officer more than any other U.S. company last year, will “reassess its strategy” for bonuses following shareholder backlash, the company said in a regulatory filing Friday.

Cheniere, based in Houston, gave CEO Charif Souki a $142 million compensation package in 2013, which included 6.3 million stock units valued at $133 million. Following a shareholder lawsuit on compensation, the company postponed its annual meeting by three months and said it would withdraw proposals that would have added 30 million shares — valued at $2.3 billion — to the company’s bonus pool for paying employees.

“After receiving feedback from stockholders and consulting with management, the board determined that this is not the appropriate time to ask the stockholders to approve a new pool of shares,” Cheniere said in an updated proxy filing Friday. “The company will reassess its strategy in this context given the need to attract, retain and motivate employees with the talent and experience to effectively execute the company’s strategic business plan.”

It is amazing how quickly people forgot about Tyco, Enron, Adelphia and many other. Awarding stock options is the stock holders enemy. It promotes shortsightedness, stock price manipulation and general dishonesty. If these guys give themselves the option to buy stock at $.10 on the $1.00 they have a huge incentive to BS the stock price up, take the money and run. Stock options are also a nice tax dodge. A better incentive is corporate profit sharing on a 5 year basis or they could participate in the employee stock purchase plan just like everyone else. That would put everyone on the same page, eliminate the CEO wanting to make himself rich quick and instead everyone would concentrate on building long term value.

[QUOTE=powerabout;136725]I always remember what my brother ( retired investment banker) used to tell me ‘JR Ewing couldn’t cut it in the real world of oil n gas, not ruthless enough’.
and
’anyone that thinks a public company is run for the benefit of the public shareholders is in dream land’[/QUOTE]

This stock is trading at over 500 times its tangible book value. There is either some serious manipulation going on or a LOT of very ignorant investors or both

Now if only more millionaires were Patriots. (From Huffington Post, but still a decent article.) 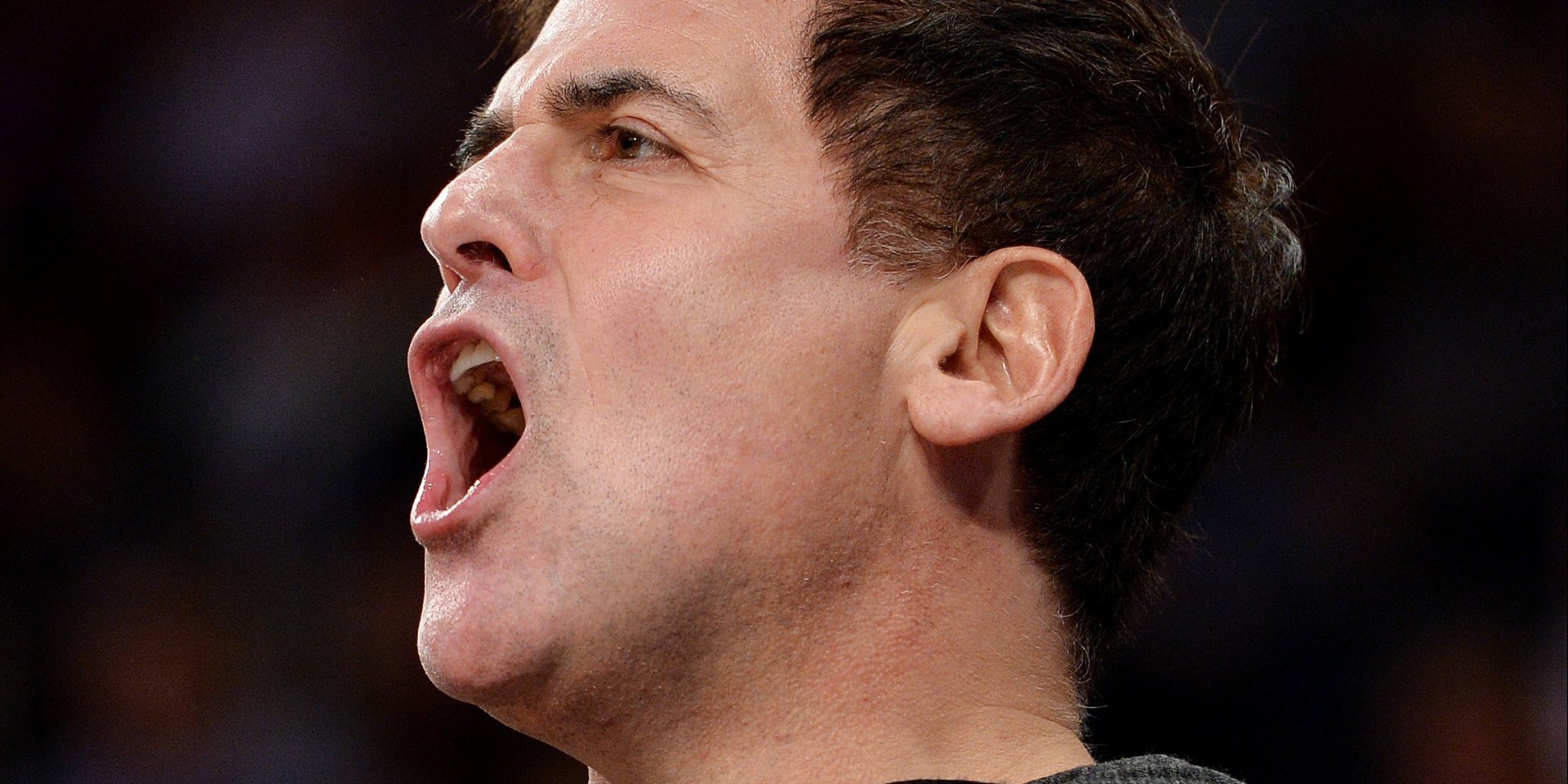 Corporate greed is getting out of hand, and Mark Cuban isn't going to take it anymore. The

Let’s look at the GM deal, Company goes bankrupt and the CEO gets a bonus, Get the hell out of here and folks actually Bitch about paying someone what they are worth. OK,… Hound away experts.

Why not BITCH about that Star Trek Guy that took a Million shares as a payment for his salary on that Travel web site thingy a bob. Hell he got 100 million out that deal and I can get cheaper prices by just calling the airlines then going through the website.

NOT ONE SOLE said you COULD NOT invest in that company. You missed the boat and listened to some EXPERT and now your pissed someone made some money. Go to bed Liberals.

Yea but Murph it’s not like Capt Kirk was in a position to affect company policies and strategy. He was hired to promote the company not be an exec.

The corporate managers that are given really sweet stock options can implement plans that will drive up a stocks value in the short-run, think 2-5 years, retire with boatloads of cash before it collapses and not have to deal with creating truly innovative 20+ year plans that are good for all stakeholders.

the shareholders have made their feelings known concerning this massive giveaway…GOOD!

HOUSTON (Bloomberg) – Cheniere Energy Inc. shareholders delivered a rebuke to the best paid U.S. executive, saying in a vote that they opposed his $142 million pay package.

Shareholders of Cheniere, the natural gas export company whose value has more than doubled over the last year, cast non-binding votes against CEO Charif Souki’s 2013 compensation plan during an annual meeting on Sept. 11, the company said in a filing Sept. 17. Souki was awarded 6.3 million stock units valued at $133 million that, along with his other compensation, made him the highest paid executive of a publicly traded U.S. company last year.

The vote of more than 87 million shares against the compensation, versus almost 76 million supporting it, was non- binding, making it little more than a barometer of shareholder sentiment toward the pay plan. Cheniere is expected to make the first export shipments of liquefied natural gas from the U.S. shale boom beginning next year.

now will the Board of Directors follow the will of the shareholders?

I’m sure their are a few people more skilled and capable than Charif Souki. I bet they would be estatic to take the CEO spot for two million annually plus some stock incentives just to prove their skills. They just aren’t members of the same good ol’ boys club that Souki associates with. No one is worth that kind of compensation, the whole damn country ran way better when the wealth was shared more equally.

You come up with a billion dollar idea, good for you, you deserve whatever your idea is worth. i.e. Facebook, Google, Warren Buffet, Henry Ford, and this short list goes on. But these CEO’s collecting $50, $60 million or more annually! I’m calling crooked and corrupt bullshit on those folks. Henry Ford was a genius ahead of his time. He paid his employee’s $5 a day when the standard wage for a factory worker was $2 per day in those days. He made sure his employee’s could afford to buy the cars they built on Ford’s revolutionary assembly lines. They we his employee’s and more importantly to the fledging Ford Motor Company, they became his customers. Ford Motor Company earned something like $52 million the first year in business. Other titans of industry actually attempted to have Ford prosecuted for treason for giving such pay raises to the common worker. (people like us)