I know I am sexy as hell to these old bags but I swear to God above I am an innocent man! The cutter didn’t make much of a splash on eBay.

Born as a Navy salvage ship in 1943, U.S. Coast Guard Cutter Acushnet had been retired in 2011 as the “Queen of the Fleet” – the oldest cutter in service. The ship was ready for its third act, and Vernon Officer put himself forward as the man to direct it.

Officer had dreams of running diving business off the 213-foot vessel. Instead, he wound up trying, and failing, to auction off the vessel on eBay in a bid to cash out his bad investment, which is moored in Anacortes, Washington., north of Seattle.

Now, federal prosecutors claim Officer defrauded a wealthy widow during a string of frauds that saw him blow through more than $1 million taken from the 83-year-old woman’s life savings.

Officer, 56, is alleged to have struck up a relationship with the woman online, then duped her during an investment scheme involving the retired cutter. Prosecutors claim Officer convinced the woman he would be thrown in jail if he didn’t make good on the $600,825 bid he made on the Acushnet during a government auction.

Indicted in secret last month, Officer was apprehended Thursday in North Dakota. That arrest was the latest development in an investigation dating to the Acushnet’s sale in March 2011.

Writing the court, a Coast Guard Investigative Service special agent said the woman met Officer through a dating website aimed at senior citizens. She’d lost her husband of 53 years some time before and was lonely.

Having described herself as a “doctor’s widow,” the woman grabbed Officer’s attention. Days after they first connected, he traveled to Virginia to meet her. She would later tell investigators she “felt brainwashed” almost immediately.

The expenses soon began to pile up, the Coast Guard special agent said in court papers. Officer charged $61,000 in dental work to the woman, the agent said, then took a diamond ring and had it recast as an earring he wore.

At the time, the woman had more than $1 million in investments, enough to guarantee her a steady fixed income for the rest of her life. Her financial managers were shocked, then, when she liquidated her entire portfolio on March 16, 2011, the day Officer bought the Acushnet.

Acushnet was launched April 1, 1943, as USS Shackle, a Navy diving and salvage vessel rushed into production for service in the Pacific. During World War II, the ship served at Pearl Harbor, Midway Island before joining in the invasions of Iwo Jima and Okinawa.

Transferred to the Coast Guard after the war and rechristened Acushnet, the cutter’s duty stations included Portland, Maine, Gulfport, Mississippi, and, finally, Ketchikan, Alaska. The official Coast Guard history describes the ship as “a dependable friend to fishermen and boaters in distress” credited with saving the lives of merchant seamen, Cuban refugees and, one Christmas Day, the entire crew of a dredge disabled off of Cape Cod. (Less than official histories describe a 1976 UFO encounter.)

Acushnet became the “Queen of the Fleet” in February 2007, with the decommissioning of another aging medium cutter. The ship was decommissioned on March 11, 2011 and auctioned by the General Services Administration.

Officer was the highest bidder. He was also more or less broke.

“You’re not going to believe what happened,” Officer told the widow, according to court papers. “I won the bid.”

Speaking with the Coast Guard investigator, the widow said Officer told her he would “go to jail” if he didn’t come up with the money. That was a lie; Officer simply wouldn’t have received the ship.

Officer told the woman he planned to use the boat in a diving business he planned to operate in Costa Rica or Belize, the Coast Guard special agent said in a 2012 search warrant affidavit. The agent noted Officer has no experience in the diving industry.

Bank records show Officer used the woman’s money to pay off Acushnet. He founded a company – International Underwater Dive and Explorations – days later, named himself majority owner and transferred the ship’s title to the firm.

Officer first moored Acushnet in Seattle before moving it to a moorage at Orcas Island. The engine failed on Jan. 23, 2012, near Friday Harbor, and the ship’s crew was forced to drop anchor to keep it from running aground; it was ultimately towed, at public expense, to Anacortes.

According to investigators, the thefts continued for nearly a year. All told, Officer is alleged to have taken $431,000 from the woman beyond what he spent on Acushnet.

The woman “said that she kept making deposits because she was afraid that her children would find out what she had done, and that if she kept funding the business she would be ‘able to get out of it’ and get her money back,” the special agent said in court papers. “She said she also felt that she needed to keep providing money to protect her investment. …

“Officer had her convinced the money was going towards the daily operation and maintenance for the sale of the vessel.”

By January 2012, Officer’s plans for the vessel had changed. According to court papers, he told Coast Guard investigators he planned to moor it in Miami and turn it into a floating museum. Weeks later, he created a new firm in Alaska using Acushnet’s old name, Shackle Eco Adventures.

In March 2012, Officer again hit up the woman for money, the special agent said. She told the court Officer was trying to move the ship into Canadian waters to dodge tax collectors.

“We’re in trouble here,” Officer told the widow, according to the special agent’s account of a recorded phone call. “We’re in so much (expletive) trouble you can’t believe we’re in trouble. …

“You’re fixin’ to lose everything you got invested in that boat unless you come up with some more cash!”

Officer met with the Coast Guard special agent in May 2012. During their meeting in Anacortes, he explained he bought the ship with “other people’s money.” He claimed to have spent $1.5 million on the Acushnet, and hoped to get $4 million for it on eBay.

As the months passed, Officer claimed to be near a movie deal involving the ship. He listed the ship for sale with a yacht broker. The special agent said he even asked her to convince a woman he’d met online that he wasn’t a “con man.”

“Officer stated he had done nothing wrong and wanted me to assure his new investor,” the special agent said in court papers. “Officer insisted he was planning on getting the ‘ship running’ and intended on selling it.”

Writing the court, the special agent said staff at the Anacortes and Seattle marinas where Acushnet was moored didn’t corroborate Officer’s claims that he hired workers to repair the boat while hosting parties meant to entice buyers.

“No one recalled any staff or workers for the vessel at either location other than a ‘security staff’ of two to three men who reportedly were guarding the vessel for about a week … and a ‘couple’ of day worker who worked for Officer for approximately one week,” the special agent told the court.

Investigators also spoke with a Canadian woman who described herself as being engaged to Officer. She believed he owned a gold mine in Utah, and that he’d financed the Acushnet’s purchase by selling a helicopter.

The special agent noted that Officer appears to have convinced another woman to buy him $50,000 worth of computer equipment. He was alleged to have told the Missouri woman he planned to start a business.

Officer is currently being held in federal detention in North Dakota, where a magistrate described Officer as unsuitable for release “given his criminal history and transient lifestyle.”

Federal prosecutors have asked that Officer be returned to Washington. He has been charged with 10 counts of wire fraud, as well as a single count of tax fraud.

The Acushnet remains moored near the Anacortes ferry terminal with a $990,000 price tag.

found this additional article…that is not my photo! I am much more handsome! 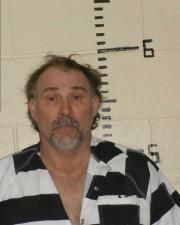 A former Anacortes, Wash., man was apprehended in North Dakota and stands accused of bilking a Virginia woman out of more than $1 million, including $600,825 to buy retired U.S. Coast Guard cutter Acushnet, formerly the USS Shackle.

Vernon Wayne Officer Jr., 56, appeared Monday in U.S. District Court for North Dakota after being charged Thursday in the Western District of Washington state with 10 counts of wire fraud and one count of filing a fraudulent tax return.

Officer is in custody in Rugby while he awaits transfer to Washington state.

The indictment indicated that Officer, who met the woman on a social website in March 2011 when he was 52 and she was 79, flew to Virginia after learning the woman had a substantial estate. During his stay, he allegedly demanded money for various expenditures, including to fix his vehicle.

Over the course of the following year, Officer allegedly continued to contact the woman to demand more than $400,000, which he said was necessary to repair, maintain and attract buyers for the Acushnet.

“For example, (he said) that he needed money to throw extravagant parties for prospective buyers of the boat,” according to the indictment.

Officer allegedly threatened the woman by saying she would lose her entire investment in the ship if she didn’t continue to send him money.

Officer later attempted to put the 213-foot Acushnet up for sale on eBay. However, the ship never sold as bids fell below the minimum price given by Officer, according to the Ketchikan Daily News.
Income declaration

Officer also is accused of fraudulently declaring his 2011 income as $20,664, when in reality he received much more, according to the indictment.

If Officer is convicted, everything he acquired through the woman’s money would be subject to asset forfeiture.

I wonder what the old lady was expecting in return…was he promising to give her the rodgering of a lifetime, or what?

He did, but not in a nice way.

So, now that Acushnet’s available again, are you interested in a crack at the old dame? (the ship, not the lady in VA)

I think we should set that guy up with an account here, he could bring some good perspective to our topics.