Not so new news, but the first detailed report I have seen about this unusual “rescue mission” for a Norwegian Coast Guard vessel:

Lifting the instruments out of the ice-covered waters was a demanding job, but the scientists now have a year of collected data important for understanding the Arctic Ocean climate changes.

The Russians like to have swimming pools wherever they are:

The pool brings sport, comfort and joy to Arctic military men serving about as far north as you can get.

Novatek and Gazprom Neft have formed an exploration and production JV to develop a license in the East Siberian Sea and the Chukchi Sea.

A good deed news story from the Arctic:

A fluffy dog was rescued in the Arctic by Russian sailors after it wandered off the home village and got lost on the sea ice. The Russian icebreaker Alexander Sannikov was working near the Gates of the Arctic terminal when its crew noticed a pet by...

And good news news among rising military tention in the Arctic:

Emergency cooperation gets priority amid military buildup and COVID crisis

One day after Norway scrambled a pair of F-16 fighter jets to meet Russian military planes outside its northern airspace, the two countries kick off a joint search-and-rescue drill in the maritime border areas.

Increased military activities up north by both nations make it important to have good mechanisms to ensure that episodes do not create misunderstandings or unpredictable escalations.

It is good that the Pomor spirit still exists among the people in the region, even as “big powers” (China, EU, Russia, USA) tries to muscle in to exploit the resources and opportunities there.

Arctic miners get financing for one of world's biggest palladium projects

The Russian Platinum has signed a memorandum of understanding with financial group VTB and state development corporation VEB over the development of the Chernogorskoye field in the far northern peninsula of Taymyr.

More precious than gold: Why the metal palladium is soaring

The price of the precious metal palladium has hit a record high of $2,500 an ounce as demand rises.

And the winner IIIIS!!

Rosatomflot signs contract on construction of floating dock for icebreakers...

Looks like Novatek has sent the season’s first eastbound LNG shipment along the Northern Sea Route. One of the icebreaking LNG carriers, Nikolay Urvantsev, is currently sailing independently but is expected to be joined by the nuclear-powered icebreaker Yamal later. The Arc7 LNGC is scheduled to arrive in Japan on 2 July.

This season’s pilot voyage comes about a month later than last year. 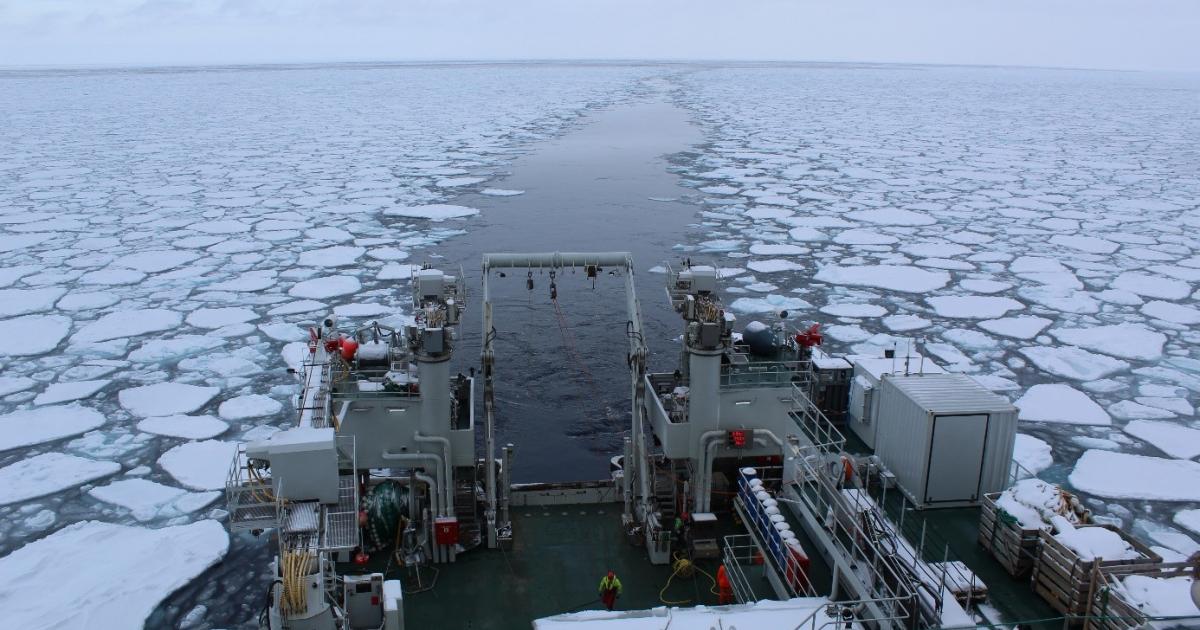 Interests in the High North remains and amongst other news, Russian PM suggests the Northern Sea Route as the main transport route. Here is this week’s newsletter, bringing you news from business, science, education, NATO’s summit and life in the...

Arctic ice is receding 'more quickly than ever' - ArcticToday

Ice in the Arctic is receding more quickly than ever, a German researcher who headed the largest expedition to date in the area said on Tuesday. The icebreaker Polarstern, the flagship of Germany’s Alfred Wegener Institute, set off from Tromsø,...

Could it be that the WEATHER is warmer? It is summer after all.

‘He and his team saw first hand that “we are on the verge of that tipping point which will lead to the disappearance of the ice in the Arctic summer,” he said.’

I seem to have heard that scary prediction a thousand times before. It’s never happened. It won’t happen.

Oh yes it did:

The Last Time the Arctic Was Ice-Free in the Summer, Modern Humans Didn’t Exist

Ice has been a relatively constant feature of the Arctic for most of the past 36 million years, but there have been some gaps. Scientists aren’t...

Oh yes it will:

A new analysis, using global climate models, predicts that most of the Arctic Ocean could become ice-free during summer by 2050.

But ask the people that live in the Arctic if it is getting warmer and how it affects their lives.
PS> Warmer on average, which is climate change.

Oh yes it did:

Perhaps if you understood English, and I don’t hold that against you, it would be obvious that my comment was that;

In plainer language, the predictions have been made over many decades by actual humans that the Arctic will be ice free by such and such a year. Those dates when the Arctic would be ice free have passed … and guess what? It never happened.

So no mention by me of any geological time scale, only the failed predictions of eco-zealots.

Oh yes it will:

And the first words of the headline are “Simulations suggest”. And I’m prepared to bet $1 million that it won’t. Accept the bet and you could collect in 2051, after the event.

But ask the people that live in the Arctic if it is getting warmer and how it affects their lives.
PS> Warmer on average, which is climate change.

I don’t care what affects the people who live there. This argument is whether the Arctic will be ice free in summer. I say such predictions have ALWAYS failed.

Don’t forget the climate can get colder too. What’s that called?

Perhaps if you understood English,

I do have a problem understanding your argument, not English (Even the Aussie variety)
“It never happened” appears to be fairly clear and open ended to me. No time scale.

And I’m prepared to bet $1 million that it won’t. Accept the bet and you could collect in 2051, after the event.

OK put $1 Mill. in an escrow account for now.
At least you have understood that the prediction is ; “Ice free in the summer by 2050”
Although your statement that:

Those dates when the Arctic would be ice free have passed … and guess what? It never happened.

Indicate that you have not.

If you would stick to one argument at a time, I MAY be able to understand better.
Remember I’m no Aussie. Circular arguments can get confusing.

PS> If you have problem understanding my English, try Google Translation. I believe they offer “Aussie English” as one of the many options.

I do have a problem understanding your argument, not English (Even the Aussie variety)
“It never happened” appears to be fairly clear and open ended to me. No time scale.

No, you don’t. You understand perfectly that the sentence “It’s never happened” referred to the sentence preceding it, “I seem to have heard that scary prediction a thousand times before.” There’s a word in there that gives it away, “prediction.” That means, as you perfectly understand, a forecast by a human made about what will happen in the future. There’s the start and finish of that elusive “time scale” you regard as open ended. The start is when the human made the prediction (shall we say in the last half century), wrote it down and gave a date by which time it would happen. Several of those dates have come and gone.

That “prediction” has never come true.

OK put $1 Mill. in an escrow account for now.

If you accept the bet, place your money first. If not, you can simply trust me. I’ll be very happy to pay. For a start, I’ll have just received my congratulatory telegram from the king on the occasion of my 100th birthday and won’t have much use for a spare $1 million. Norway will then be under a couple of miles of ice.

At least you have understood that the prediction is ; “Ice free in the summer by 2050”

Sure, but I define ice-free as “having no ice” … none.

Although your statement that:

Those dates when the Arctic would be ice free have passed … and guess what? It never happened.

Indicate that you have not.

Um. No. Just re-read the full paragraph and behold that one sentence follows another. Just as before (as teacher corrected you then), you deliberately tried to misinterpret that the previous sentence was the one containing the “dates” you’re now scratching your head about. But you’re not scratching your head, you’re cluthching at straws.

Plenty of time that you could have watched the video and debunked (in writing) the statements and graphs of Professor Happer and the various others he cites.

Call on your numerous supporters here to assist. Should only take a few minutes to blow the whole thing sky high. I’ll wait, but not till 2051, for that.

Predictions or simulations are just nicer and, for the partials, more scientific sounding names for the models they are based of.

The well-known GB statistician George Box (died in 2013) coined the scientific aphorism:
"All models are wrong, but some are useful".
https://en.wikipedia.org/wiki/George_E._P._Box

The scientists living of political money will indeed say:
“We have found the rare useful model”… while its validity can only be certified in hindsight.

The ‘Waldsterben’ in Germany, around 1980, where all forests in Europe were proclaimed to die in a few years, is an example. The adversaries said ‘hang the Greens on the trees’… as long as there are trees.

Now our forests do well, they even gained in surface… Today, we spend still millions to count each tree and their foliage, and produce reports saying ‘yes our forests are fine, but we must continue to count the trees and every leave’.

The alarmists learned a lot. They do not make the same error, predicting the future after a few years; they reach out to centuries… when they will all be gone.

We orbit around the sun, nice and easy for us to understand and we teach young children of why we have summer and winter. But our sun is moving along at approximately 828,000 kph as we orbit our galaxy every 230 million years.
We don’t know what is over the fence, we don’t know what caused the last ice age or global warming, humans haven’t been around for a complete seasonal change.

The coastal plain of the Arctic National Wildlife Refuge is so important to the Porcupine Caribou Herd that the Indigenous Gwich’in people of the region call it “Iizhik Gwats’an Gwandaii Goodlit,” meaning “the sacred place where life begins.” And...

And with the sea ice residing, conventional drilling rigs can be used in waters that would such operation impossible only a few years ago:

Rigs are sailing north for drilling in Russian Arctic waters

Wells will this summer be drilled in the the Kara Sea and the Gulf of Ob.

But for how much longer will there be a market for oil from the Arctic:

Addressing an audience of international oil company leaders, Igor Sechin warns against a rapid shift to renewables, and makes clear that the world needs his Vostok Oil.

An IMO sub-committee approved a proposed Arctic heavy fuel oil ban. Environmental advocates and indigenous peoples’ groups criticized the ban as insufficient and called on Arctic states to pass stronger regulation on their own.

Gazprom Neft launches production of its Tazov field, to be cornerstone in a new Arctic oil cluster.