A Master’s Guide to Berthing - & etc

I wondered if the procedure above is a local harbor practice, or is it followed in other places?

Closest to that I’ve seen was Halifax on a windy winter day. Halifax requires going into the bay and making a 180 turn which in this case required putting a stiff wind on the beam.

Pilot told me the two tugs were calculated to be able to control the ship with the wind abeam but to check we stopped with the wind dead on the beam and had the tugs report how much throttle was required to hold before finishing the turn and heading for the berth.

Never had that option, regarding assist tug HP. Doesn’t matter. Used what I had available and used those tugs with a safe margin. I rarely needed more than one assist, but if two were needed, kept the bells low in case I may have needed a bit more, “For adjustment to the situation” And I would agree, maintain safety margins and reserve capacities. Still, was never in a giant hurry. Nice to have the extra oomph if needed, even better that you didn’t have to use it, but prepared for it.

Many of us have approached docks in less than Ideal wind and/or current conditions. Coming in with nothing left in your back pocket is poor planning. Other than a rabbits foot in one pocket and a horseshoe up your ass, you ain’t gonna have good results.

It also helps to be sober when berthing.

Yes, that is not on the checklist, but advisable . Nice chuckle

This is Zeebrugge. The red line is from the locks to the berth. Once the ship gets stopped the tugs push straight in. No hazards to avoid if for some reason the tug can’t stop the ship. 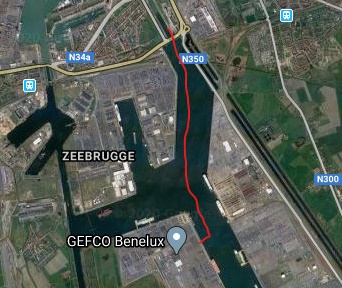 From that reference this: 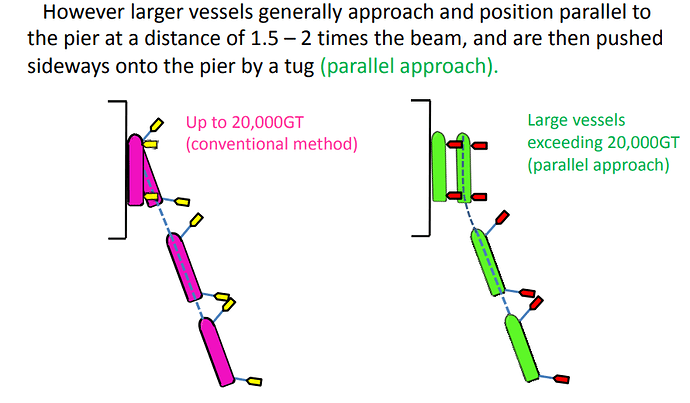 The ship on the right shows the technique we use. I’ve never overshot because we couldn’t get stopped but it does make precise speed control less critical.

From the linked reference:

This is the locks in Bremerhaven where the car ships dock. I don’t know when they shut down the port but I do know they routinely dock car ships in here in gale force winds. 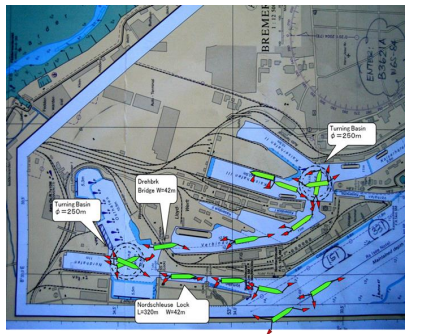 The wind force on car ship with 5000 square meters of sail area is approx 340 tons when the wind is on the beam. On days of bad weather the pilots use three tugs.

Reducing the time the wind is at a broad angle means that the operation moves at a good pace. Nothing slow and easy about it.

This is the turning basin lower left in the diagram 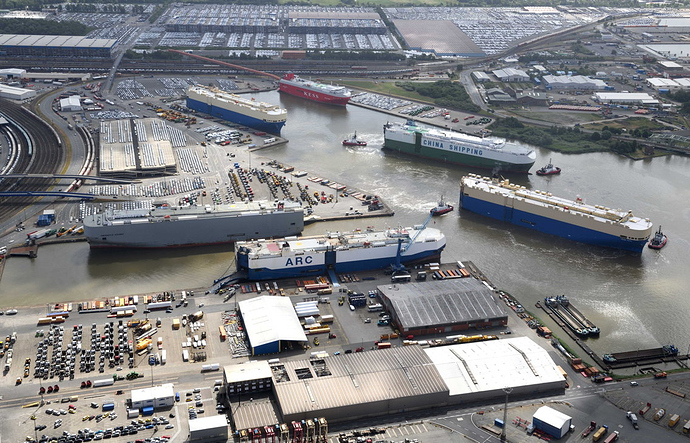 Here are the locks 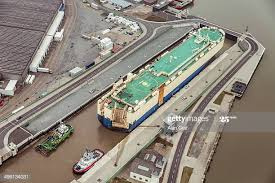 Do not disagree there are times when you have to have a more than heavy hand with throttles and tugs. Thankfully, most times I did not. My thoughts were of people that had a heavy hand when not called for. I enjoyed breakfast with my engineers. All good sir.